This is the Recap & Ending for Netflix K-Drama All of Us Are Dead: Episode 4. Cheong-San’s mom sees the zombies chasing the helicopter. She climbs over the wall and follows them. On-Jo walks to Cheong-San when he watches the campus. She notes that his hand was hurt.

All of Us Are Dead: Episode 4 Recap 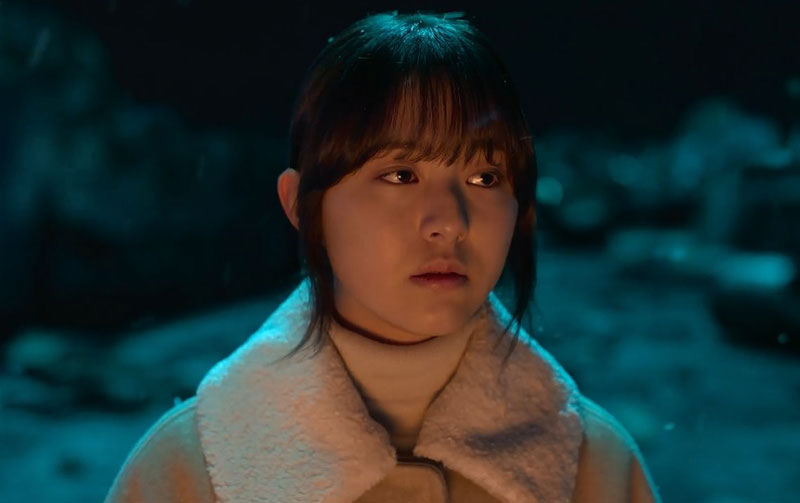 Note: From here on out there are specific plot spoilers for Netflix K-Drama All of Us Are Dead: Episode 4.

Cheong-San tells the classmates that he didn’t hear anything after Na-Yeon and Sun-Hwa left. Dae-Su thinks the two are alive. But Ji-Min wishes Na-Yeon to get killed because she killed Gyeong-Su. Eun-Ji stays on the rooftop with Cheol-Soo. She tells him that people won’t come to save them. She adds that she wants to get killed. But he points out that he knows she wants to be alive.

Dae-Su tells people to treat the broadcasting room as bathroom. On-Jo is against it because she thinks boys and girls are different. She gets people to make a bathroom in the recording room. Nam-Ra thinks nobody will come to save them. She tells the classmates to do something. On-Jo is against it. She thinks they should wait for them. Su-Hyeok agrees to what On-Jo said.

So-Ju tells Eun-Hee that he wants to go to the school to save his daughter. She reminds him that he has duty to save people not just his daughter. He turns around and finds out that the people are staring at him. Gwi-Nam tries to flee. But the zombies see him and attack him.

Mi-Jin wants to leave the restroom. She tells Ha-Ri to protect her with the arrows. But Ha-Ri rejects it. Mi-Jin thinks Ha-Ri is going to go to the university without studying. Because she’s an athlete. Ha-Ri thinks Mi-Jin is stupid and she slaps her after she poked her head. Mi-Jin has a fight with Ha-Ri.

Jae-Il breaks into the interrogation room and asks Byeong-Chan what’s happening outside. Byeong-Chan tells Jae-Il that he turned his son into a monster because he cried and asked for death after he got bullied by the students. He thinks everyone should take duty for it because they chose to ignore it.

Jae-Il is furious after he heard what Byeong-Chan said. He tries to beat the poor father. But he gives up the mind. He tells him to chance the world instead of killing people. He asks him for the solution. Byeong-Chan remembers he found the solution. But he doesn’t tell it to Jae-Il.

Jae-Il tries to take Byeong-Chan to leave. But he sees the zombies biting his colleagues. Byeong-Chan saves Jae-Il from the zombie. But he gets bitten. He tells Jae-Il that the solution is in the lap at the school. He rejects to leave and he helps him stop the zombies.

SEE ALSO: All of Us Are Dead: Episode 3 Recap & Ending

Jae-Il runs to jump on the car. He tries to kick Ho-Cheol because he mistakes him as a zombie. Ho-Cheol tells Jae-Il that he’s a human. They run away from the police station. Cheong-San wakes up in the morning. He walks to the window to look outside. On-Jo joins him. They find out that nobody comes.

All of Us Are Dead: Episode 4 Ending

Ha-Ri notes it as well. She wants to leave the school. But she thinks she should save her brother first because she didn’t see him turning into a zombie. The people in the broadcasting room want to leave as well. But Nam-Ra thinks they should have a plan first.

SEE ALSO: All of Us Are Dead: Episode 5 Recap & Ending

Eun-Ji is furious to slap Cheol-Soo after knowing Gwi-Nam is going to post her film online. She wants to take her life. But Cheol-Soo stops her because the footage will be posted even if she dies. She wipes off her tears and decides to go to look for the phone. She asks him to help her. But he rejects it.

Cheong-San and Su-Hyeok leave the broadcasting room from the window. They intend to go to the teacher’s office. Dae-Su wants to join them. But Joon-Yeong stops him because they need his body. Eun-Ji runs in the corridor when the zombies chase her. She gets bitten and leaves them. She finds out that she’s fine. The zombies don’t approach her.

Cheong-San and Su-Hyeok get into the teacher’s room from the window. They find out that Eun-Ji is breaking the phones. Cheong-San tries to pick the phone up. But Eun-Ji sees him and attacks him. Su-Hyeok throws Eun-Ji away. He has to be separated from him when they’re surrounded by the zombies.

So-Ju attacks the zombies with water. Eun-Hee and her follower catch chance to flee upstairs. But they find out that the door of the rooftop is locked. The follower reports it to So-Ju. So-Ju tells U-Sin to go to help Eun-Hee. He fights with the zombies alone.

U-Sin opens the door. He goes to pick So-Ju up. So-Ju joins Eun-Hee. He praises her for what she did. He sends the signal to the helicopter. Cheong-San is chased by the zombies. He runs into the principal’s office and closes the door. He turns around and sees Gwi-Nam tying the principal.

Gwi-Nam tries to stab the principal. Cheong-San stops Gwi-Nam and takes out the phone. He films him and tells him that he’s going to send it to police. Gwi-Nam kills the principal when he tries to flee. He wants to hurt Cheong-San with the knife. He takes off his phone.

Cheong-San picks up the phone and runs away from the principal’s office. Gwi-Nam casts the knife to Cheong-San’s back when he chases him.

All of Us Are Dead: Episode 4 stars Park Ji-Hu, Yoon Chan-Young, Cho Yi-Hyun and Lomon.