This is the Recap & Review for Korean Drama Graceful Family Episode 3. Yoon-Do’s mom was sentenced for life in prison as she was wronged for killing Seok-Hee’s mom. She cries to the judge and tells him that she didn’t kill anyone. She thinks it’s unfair. 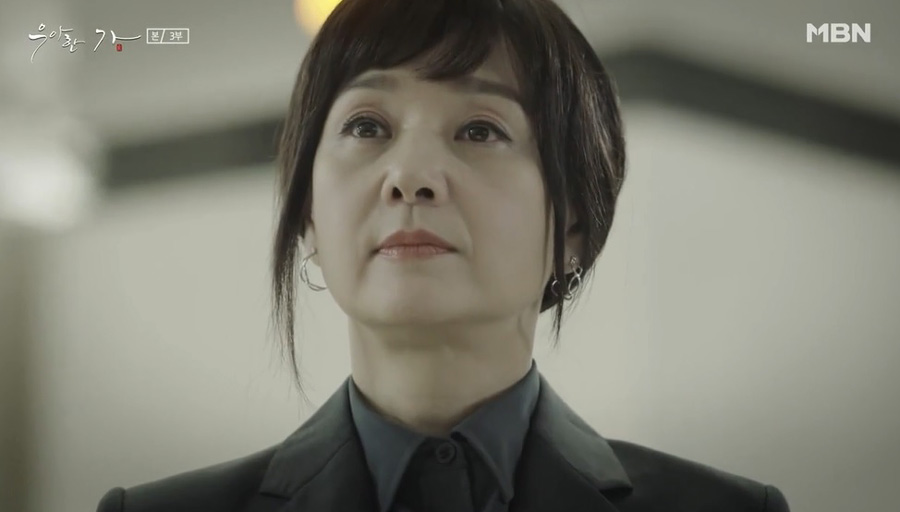 Note: From here on out there are specific plot spoilers for Korean Drama Graceful Family Episode 3.

Yoon-Do’s mom Jae-Rim complains to Je-Kook that it isn’t what she promised. But she is taken by the police. Yoon-Do cries to Jae-Rim, and she tells him that it wasn’t her.

Seok-Hee gets off the car, and she begins to vomit. Je-Kook walks to Seok-Hee. Seok-Hee looks at Je-Kook and asks her to let her stay there. She says that she wants to love with her grandpa. Je-Kook hugs Seok-Hee when she’s crying.

Je-Kook gives the passport to Seok-Hee at the airport. Seok-Hee asks if she can come back soon. Je-Kook promises it. Seok-Hee gives her badge to Je-Kook and tells her to return it to her when she comes back. Je-Kook calls someone and tells him to send Seok-Hee to a private school that doesn’t have any Koreans. She tells him to make sure the girl cannot contact there and take her passport. She throws the badge into the trash can.

Seok-Hee is arrested, and she tells Yoon-Do that it wasn’t her. She is taken into the police car, and he tells her not to say a word. He notes that Gwang-Mi just takes photos of Seok-Hee, and asks her about it. She thinks she doesn’t do anything wrong as she is doing a story on Seok-Hee. She tells him that she comes from Newspatch.

Yoon-Do gets in the car and begins to drive. He reports to Je-Kook that Seok-Hee was arrested for drug possession, and a reporter from Newspatch caught it. He adds that they were from prosecutions, not the police. She tells him to find out what’s going on and let her know it.

Boo-Ki takes a look at the photo, and thinks Gwang-Mi did a great job. She brags that she put her life on the line to get the shot, and thinks she is amazing. He says that she is very amazing, and tells her to keep reporting on what’s happening at the prosecutions. But she tells him to upload the article first.

But Boo-Ki rejects it and thinks they’re dealing with MC Group. He adds that they will take a hit if they upload the article and Seok-Hee is found innocent. He says that her story is shocking but dangerous. He wants to release it after they see how the prosecutions are moving.

Je-Kook wants to procure the greenbelt, and Kyung-A tells Je-Kook to have a meal with the minister. Because the minister is a little picky.

Sang-Won offers to give Seok-Hee to Tae-Hyung and asks him not to investigate MC Group. Tae-Hyung agrees to it.

Tae-Hyung tells Seok-Hee that he will investigate her according to the rules. He goes out and runs into Yoon-Do. Tae-Hyung thinks Yoon-Do is busy cleaning up the mess for rich people, and he lets him in.

Yoon-Do reminds Seok-Hee that drugs are a serious crime in their nation, and it makes her angry as she thinks he doesn’t trust her.

Seok-Hee tells Yoon-Do that she was set up by Tae-Hyung, and TOP was involved. Je-Kook tells Cheol-Hee that Tae-Hyung’s investigating MC Group, and thinks Tae-Hyung will get back his pride if they stroke his ego. Cheol-Hee agrees to it.

Kyung-A tries to bribe Boo-Ki, but he says that he will have Seok-Hee’s face on the main page. She gets angry and tells him to hide under an umbrella when it’s raining.

Je-Kook meets with the minister, and he tells her to use her talents in the right way. Tae-Hyung says that the urine test was negative and the hair analysis will take about 2 weeks.

Yoon-Do tells Tae-Hyung not to be detention of Seok-Hee. But Tae-Hyung rejects it. Je-Kook tells Seok-Hee to apologize to Tae-Hyung. Seok-Hee rejects it as she thinks she is innocent.

Yoon-Do tells Seok-Hee to cooperate with Tae-Hyung, but she thinks the only way is to prove her innocence and get out of it herself.

Yoon-Do finds Je-Kook and asks her why she admitted Seok-Hee’s sin in front of Tae-Hyung. She reveals Seok-Hee had problems in high school, and asks him what will happen. He thinks it will take some time to prove Seok-Hee’s innocence.

But Je-Kook asks Yoon-Do to persuade Seok-Hee, and tells him that he is TOP’s employee. Yoon-Do asks Seok-Hee to tell him the truth, but she suspects him for putting the medicine into her bag.

Yoon-Do tells Seok-Hee that he will get her out no matter what. Tae-Hyung takes the arrest warrant to see Seok-Hee, and tells her that he won’t arrest her if she apologizes. But she tells him that going to prison was on her bucket list because she is pretty. She thinks he doesn’t have the guts to touch MC Group.

Seok-Hee gets in the prison, and she screams. The roommates are scared of her, and give her the soy milk. She rejects it as she’s allergic to beans. The roommates tell Seok-Hee that they were sent there because they’re poor, and wonders why she is there since she is very rich.

In the family dinner, Seo-Jin knows that Seok-Hee is in the prison, and he thinks she is really cool. Cheol-Hee is shocked that Tae-Hyung’s looking into MC Group.

Kyung-A pays for Tae-Hyung and gives him a big case. He agrees to stop looking into MC Group, but still wants to keep Seok-Hee in the prison.

Young-Seo praises Je-Kook for doing good job. Cheol-Hee asks Je-Kook about his father. She says that it’s not anything now, and he thinks Wang-Pyo has no idea how dangerous Seok-Hee is.

Seok-Hee sees the woman bullying her roommate, and she beats her. Lawyer Yoon scolds Yoon-Do for his dumb, and tells him to take a look at Seok-Hee’s face.

Yoon-Do asks Gwang-Mi for Seok-Hee’s photo. She says that it was taken by TOP, but she has the copy. Gwang-Mi asks Yoon-Do for an interview of Seok-Hee, he agrees to it. But she doesn’t trust him and asks him to sign a contract.

Yoon-Do finds the woman Mi-Rae who framed Seok-Hee according to the photo, and asks her who got her to do so. Mi-Rae admits that it was Soo-Jin, and asks him to see Soo-Jin. Soo-Jin tells Yoon-Do that Top asked her to do it, and reveals she has nothing against Seok-Hee.

Yoon-Do plays the recording of Mi-Rae to Tae-Hyung, and Seok-Hee is released. She tells Yoon-Do that she is going to a hotel with smiling.