This is the Recap & Ending for Link: Eat, Love, Kill K-Drama: Episode 1. Gye-Hoon lets the chef to take a break after knowing he just broke up with his girlfriend. Because he doesn’t want his feelings to affect the taste of the food.

Why Gye-Hoon Cries When He Cooks? 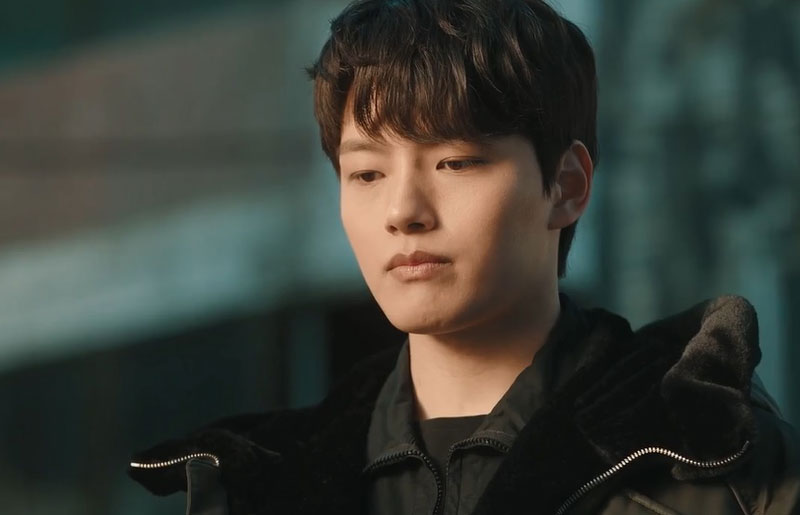 Note: From here on out there are specific plot spoilers for Link: Eat, Love, Kill K-Drama: Episode 1.

Gye-Hoon remembers a woman. He tears up. The tears drop into the soup. He passes out. He tells Manager Antonio that he’s fine. He hands over the food to him. Manager Antonio tastes the food. He finds out that it’s delicious. But he worries that Gye-Hoon will cry again.

Gye-Hoon tells Manager Antonio that he cried because he connected with someone’s emotion. He thinks he doesn’t understand what he said. He leaves the restaurant. Gye-Hoon tells Link: Eat, Love, Kill that he could feel his younger sister’s sadness when she got bullied.

Gye-Hoon believes that his sister came back because he cried again. He walks along the street. He runs into Da-Hyun. She returns home and cleans up the mess. Da-Hyun’s mom Bok-Hee visits her with the food. Da-Hyun tries to tell something to her mom. But she gives up the mind.

Da-Hyun waits for the bus with her mom at the bus stop. She gives the cash to her. She lets her take a cab. Bok-Hee is happy to show off the cash to Da-Hyun after she got in the cab. Da-Hyun sighs after she saw her mom off. Da-Hyun breaks the plate. She gets scolded by the manager.

Gye-Hoon senses the sadness of Da-Hyun. He goes to the rooftop with the food and the wine. He sees Da-Hyun. He tries to leave. But she keeps him. So he sits with her. He notes that she stares at him when he tries to eat. He hands over the food to her.

Da-Hyun eats the food and drinks the wine. She leaks that she had a bad day. Gye-Hoon stares at her and realizes that she was the one who made him cry. She notes his staring. She leaves the wine glass. She tries to leave. But he stops her.

Da-Hyun mistakes that Gye-Hoon wants to get her number. But he denies it and asks her about her age. She’s startled to walk away. She runs into Jin-Geun. He asks her if she knows Gye-Hoon. She denies it and walks away. She sees the package. He opens it and finds out that it was used.

Ms. Yoon leaks that the gift was given by Gye-Hoon. She thinks Da-Hyun flirted with Gye-Hoon. Da-Hyun denies it. She walks out of the hotel. She runs into Gye-Hoon. She returns the scarf to him. She asks him why he gave it to her. She thinks he’s a bad guy. She runs away.

Gye-Hoon throws away the scarf. Because he wasn’t the one who gave the scarf to Da-Hyun. Someone picks up the scarf from the trash can. Da-Hyun notes that someone is tailing her. She tries to run away. But she gets caught by Jin-Geun.

Da-Hyun opens the door. She sees the gift. She opens the gift and sees a pair of shoes. She goes to the company. She gets more gifts. She thinks the gifts were given by Gye-Hoon. She throws them away. Gye-Hoon gets his younger sister’s photo from the shop.

Jin-Hu tells Gye-Hoon to open a restaurant with him. Because he thinks he will be fired. Da-Hyun runs home. She sees Bok-Hee. She tries to explain it. But Bok-Hee is furious to walk out of the house. The people have a fight with Min-Jo because she refused to fix the street light. Gye-Hoon sees the scene. He thinks the people haven’t changed.

It flashes back. Gye-Young chases Gye-Hoon and catches him. She mentions her parents asked him to take care of her. He’s furious to take off her hand. He thinks she always needs his help. He gives the chewing gum to her. He runs to play soccer with the kids.

Gye-Hoon feels painful in his heart. He turns around and finds out that Gye-Young is missing. He goes to look for her. He sees the paper crane she folded. He cries when he calls her name. People look for Gye-Young in the woods. Gye-Young’s mom collapses after she realized that her daughter won’t come back. Cheol-Ho hugs his wife to comfort her. The cop Young-Hwan stares at the cop.

Da-Hyun runs out of the restaurant when Bok-Hee chases her. Gye-Hoon hugs Da-Hyun. She recognizes him and mistakes that he followed her. She tells him that she will report it to the police if he continues to follow her. She returns to the restaurant. He’s confused. He tells the neighbors what Da-Hyun said isn’t true. He returns to his restaurant. He holds Jin-Hu’s head. He tells him that he needs his help when Jin-Hu wants to give up.

Da-Hyun runs into Jin-Geun at the bus stop. She remembers what Seo-Jung told her that the guy made everyone believe that he’s her boyfriend. Jin-Geun admits that he sent the gifts to Da-Hyun. He wants to take her away because he thinks she’s his girlfriend. She takes off his hand and tells him that she doesn’t have feelings for him. She runs away. He gets angry.

Da-Hyun spots Gye-Hoon when she packs stuff. She remembers she mistook him as a stalker. She feels regret. The ladies have feelings for Gye-Hoon when he lifts the hammer to break the wall. He explains to them what kind of restaurant he’s going to open.

Bok-Hee doesn’t understand what Gye-Hoon said. She returns to her restaurant. She gets angry after seeing Da-Hyun. She tells her to go to buy some ingredients. Da-Hyun runs into Gye-Hoon on the street after she bought vegetables. She follows him and tells him that she knows he wasn’t the stalker.

Da-Hyun bows to Gye-Hoon. She apologizes to him. But he doesn’t accept her apology because she made the people believe that he’s a stalker. She tells him that she will explain it to the people. But she trips. He lets her grab his arm to walk. Jin-Geun spots it.

Da-Hyun runs into Gye-Hoon on the street. She pretends to be crippled. He points out that she was injured on the other leg. He walks away. Da-Hyun leaves the library. She walks on the street, seeing Jin-Geun following her. She runs away when he chases her.

Da-Hyun runs into her family restaurant. But she gets caught by Jin-Geun. She closes the door. It hurts his arm. He throws her to the table. She passes out after she fell to the floor. She wakes up and finds out that he got killed. She goes to the police station.

Da-Hyun tries to confess what she did to Min-Jo. But she sees the criminal worn the handcuffs. She leaves the police station, returning home. She sees Bok-Hee and Chun-Ok. Da-Hyun cries to tell Bok-Hee that she killed Jin-Geun when he tried to kill her.

Chun-Ok hugs Da-Hyun. Da-Hyun reveals she went to the police station to confess but she didn’t have the guts. Chun-Ok comforts Da-Hyun. Bok-Hee calms Da-Hyun down. Bok-Hee and Chun-Ok pack Jin-Geun. They put him into the fridge. Chun-Ok cleans the blood on the floor. Gye-Hoon wakes Jin-Hu up. He leaves the restaurant with him. He sees the fridge. They carry the fridge. Da-Hyun is startled after she saw the two carrying the fridge into their restaurant.