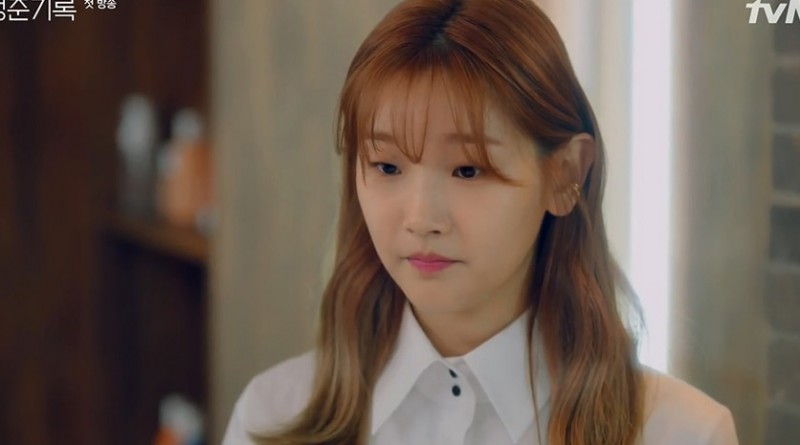 This is the Recap & Review for Netflix Korean drama Record of Youth: Episode 1. Hye-Jun guards Do-Ha’s dressing room, and Bo-Ra tries to break into. But he stops her and tells her that no one is allowed inside. She tells him that she is the makeup artist. 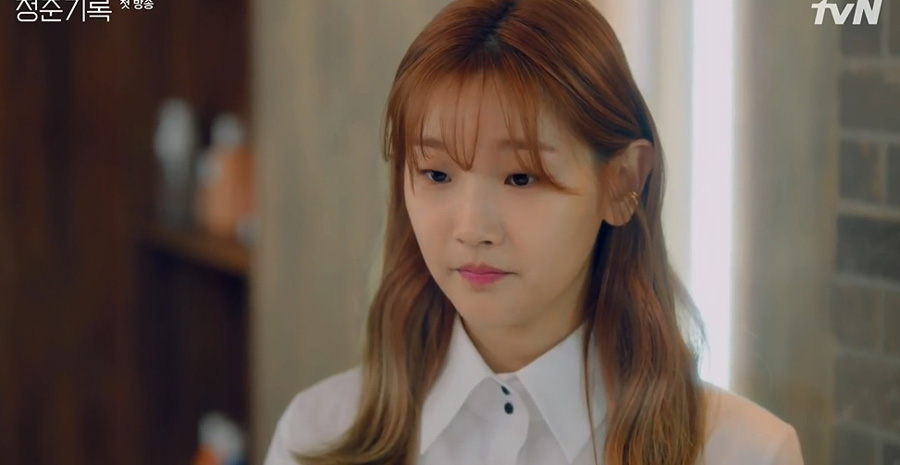 Note: From here on out there are specific plot spoilers for Record of Youth: Episode 1.

Hye-Jun touches Bo-Ra by mistake, and she treats it as sexual harassment. He tells her that Do-Ha asked to let her in because she is like a leech. Bo-Ra sighs and tells Hye-Jun to move out. She says that she will end the relationship. He tells her that he must follow his orders, but hints her to push him over.

Bo-Ra breaks into the room and gives Do-Ha a slap. She blames him for treating her like a trash, and asks for breakup. She tells him that he doesn’t deserve to be punched because she is a good person. She gives him another slap and runs away.

Do-Ha fails to stop Bo-Ra, and he blames Hye-Jun for not stopping Bo-Ra. But Hye-Jun says that he tried his best. Do-Ha rages to give Hye-Jun a big slap. Hye-Jun notes that he is hurt, and holds Do-Ha’s arm. He says that his dream is to what the jerk has. Do-Ha keeps beating Hye-Jun.

Hae-Hyo shows the photo of Hye-Jun to Jin-U. Jin-U finds out that Hye-Jun was hurt. Hae-Hyo wonders why Hye-Jun got beaten up. Jin-U thinks the silver spooner like Hae-Hyo wouldn’t know the pain of the dirt spooner. He asks Hae-Hyo if the company will announce the decision for the role, and worries about Hye-Jun.

Hae-Hyo says that he will take care of Hye-Jun. Jin-U claims that he needs Hae-Hyo to take care of him as well. But Hae-Hyo pushes Jin-U over. He gets a call from I-Yeong who asks him why he isn’t at the salon as he has a photoshoot.

Hae-Hyo mentions he said no. I-Yeong tells him that she doesn’t like his hairstyle as it looks lame. He rejects it and hangs up. I-Yeong asks Jeong-Ha why Jin-Ju doesn’t come. Jeong-Ha reveals Jin-Ju’s talking with the director, and she wants to serve I-Yeong beverages.

I-Yeong thinks Jin-Ju takes too long, and asks Jeong-Ha to do make up for her. Because she knows that he did her makeup before. Jeong-Ha points out that she just did the base makeup. I-Yeong thinks Jeong-Ha is too chatty, and asks her if she wants her to leave.

Jeong-Ha sanitizes her hands. I-Yeong likes it, and says that some artists touch her face without washing their hands first. She thought she was different when she did her makeup the other day. Jeong-Ha thanks I-Yeong and asks her if it’s a formal occasion.

I-Yeong says that it’s a casual meeting. Jeong-Ha intends to make I-Yeong look effortlessly beautiful. I-Yeong agrees to it. Jeong-Ha finds out that I-Yeong has beautiful eyes. I-Yeong tells Jeong-Ha to keep telling her she is pretty. She tells her that it puts her in a good mood.

Jeong-Ha says that it won’t sound sincere if she says it again in five minutes. I-Yeong laughs and thinks Jeong-Ha is very witty. Jin-Ju arrives and wants to take over once Jeong-Ha is done. But I-Yeong asks Jeong-Ha to do her makeup today.

Jin-Ju is shocked. Jeong-Ha explains that she will assist after she finished the base makeup. But I-Yeong refuses it and tells Jin-Ju that she hates waiting. Jin-Ju feels sorry.

I-Yeong leaves. Jin-Ju asks Jeong-Ha if she feels happy, and thinks she doesn’t have any respect for her. She warns her not to steal her clients. Jeong-Ha explains that she told I-Yeong that she couldn’t, but I-Yeong was so persistent.

Jeong-Ha says that she had no choice. Jin-Ju tells Jeong-Ha that she will make her realize that she had a easy with her office job if it happens again. She shows a face smile and walks away. Su-Bin asks Jeong-Ha if Jin-Ju scolded her again, and thinks it’s Jin-Ju’s inferiority complex.

Jeong-Ha wonders why Jin-Ju felt inferior to her. Su-Bin thinks it’s because Jeong-Ha is good. Jeong-Ha thanks Su-Bin. Su-Bin asks Jeong-Ha if she likes her more than Hye-Jun. Jeong-Ha denies it. Su-Bin thinks Jeong-Ha is a diligent fangirl. She tells her that Jin-Ju is going to Homme fashion show. She thinks she should tell Jin-Ju to take her as she thinks Hye-Jun will be there.

But Jeong-Ha rejects it and thinks she will meet Hye-Jun when it’s time. She claims that she will do her best until that day comes. Su-Bin thinks Hye-Jun will be gone from the industry because he isn’t doing well as an actor. Jeong-Ha thinks Su-Bin is so mean, and wants to take back her thank-you.

Jeong-Ha says that Hye-Jun wasn’t born with a silver spoon, and he works really hard. Su-Bin tells Jeong-Ha that the most pathetic thing a fangirl can do is complimenting a celebrity’s personality. She thinks Hye-Jun isn’t kind in real life.

Jeong-Ha reminds Su-Bin that it’s her time to work. Su-Bin tells Jeong-Ha that some people will think she is Hye-Jun’s girlfriend. Jeong-Ha takes a look at Hye-Jun’s photo, and tells him that fangirling over him is what keeps her going.

Hye-Jun blames Tae-Su for not paying him for the last fashion show and previous gigs. Tae-Su points out that he stopped Do-Ha from suing Hye-Jun. Hye-Jun thinks he didn’t do anything wrong, and he didn’t fight back for self-defense.

Tae-Su reminds Hye-Jun that the company doesn’t run well, and he rejects to pay him. Hye-Jun yells at Tae-Su and complains that it isn’t his first time to pay him late. He asks him why he has to beg him to pay him. He mentions other models said that he was an asshole when they left. He adds that he told them that he would pay them if he had the money.

Hye-Jun tells Tae-Su that he trusted him and decided to stay. Tae-Su asks Hye-Jun why he trusted him, and thinks he is too naive. He says that this is why he manages his finances. Min-Jae cannot stand it, and tells Tae-Su to pay Hye-Jun for his work. Tae-Su mentions what Min-Jae said that she was quitting. He tells her to leave if she is done packing.

Min-Jae thinks Tae-Su is pathetic, and blames him for preying on those models. She thinks he cannot keep that up. He thinks she pours it out because she is quitting. He threatens to cross paths, and tells her that it’s a small world and they work in the same industry.

Tae-Su tells Min-Jae to get lost. But she says that she is leaving the industry and she won’t see him again. She adds that she will do a good deed while she’s at it. He laughs and thinks she’s full of crap. But she points out that he likes crap, and asks which crap she should start with.

Min-Jae takes out her phone and asks Tae-Su if he wants her to talk to the press or his wife. She tells Hye-Jun that she is going to head to the Labor Office. Tae-Su asks Min-Jae if she’s threatening him. She thinks it means that he has a lot of crap if he treats it as a threatening.