This is the Recap & Ending for Netflix A Business Proposal K-Drama: Episode 8. Tae-Moo thinks Ha-Ri has feelings for him after she kissed him. But she denies it and tells him to forget it. She tries to run away. But he keeps her. Min-Woo shows up. He tells Ha-Ri that he was looking for her. 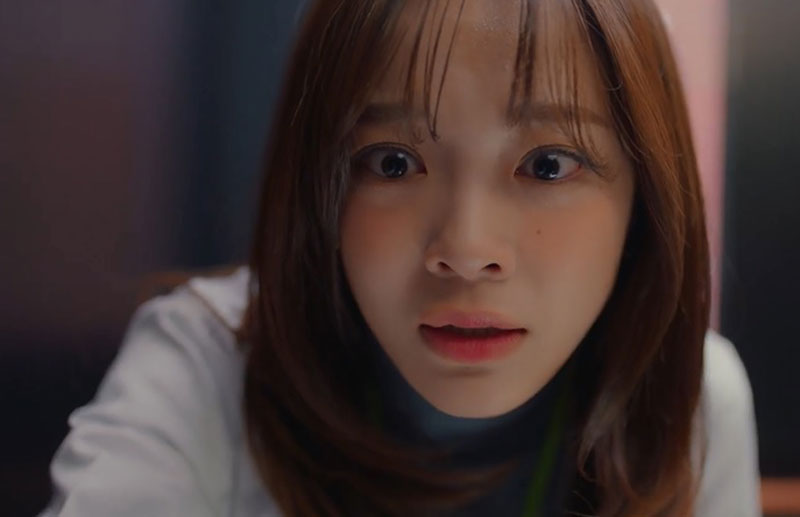 Note: From here on out there are specific plot spoilers for Netflix A Business Proposal K-Drama: Episode 8.

Ha-Ri leaves. Tae-Moo returns home and touches his lips. He’s furious to grab the girl doll. He thinks Ha-Ri is good at playing men. Ha-Ri cannot sleep. She goes to the office. The colleagues are watching her work footage. They think she’s the best employee.

Tae-Moo calls Ha-Ri. But she doesn’t pick up his phone. He notes that Sung-Hoon is happy when he talks with someone over the phone. He thinks he has a girlfriend. He walks to him and tells him to be off duty. Sung-Hoon takes a look at his watch. He smiles.

Tae-Moo meets with Ha-Ri in the car. He asks her to explain the kiss to him. She cannot give him a good answer. He asks her to buy him a dinner to compensate him for the kiss. She agrees to it but she finds out that the dishes he wants to eat are expensive.

Ha-Ri tells Tae-Moo that she cannot buy him the meal because the dishes are expensive. He offers to kiss her back. She rejects it and tells him that she prefers to buy him meal. He’s happy to taste the dishes. Min-Woo tastes the dishes as well when the photographer shoots him.

Min-Woo explains that Ha-Ri is a good girl. Yoo-Ra watches the footage. She finds out that Min-Woo is happy when he stays with Ha-Ri. Ha-Ri eats the food. She worries about the bill. The chef brings the new dish to Tae-Moo. He asks him to taste it.

Ha-Ri stares at Tae-Moo’s lips when he eats. She remembers she kissed him when she touches her lips. He wakes her up. Ha-Ri goes to the restroom. She sings a song to calm herself down. She gets back and finds out that Tae-Moo is playing piano.

Ha-Ri applauds and she has a seat with Tae-Moo. She tells him that she was surprised that he can play piano. She asks him if he played piano for other women before. But he tells her that she doesn’t have the right to ask him the question because she’s not his girlfriend.

Tae-Moo tells Ha-Ri to date him. She doesn’t reply him and she wants to pay the bill. But she’s told that Tae-Moo paid it. She runs to follow Tae-Moo, asking him why he paid the bill. He tells her that he has a big plan. She’s upset because she doesn’t know what his plan is.

Ha-Ri protects her lips when Tae-Moo is close to her. She promises to buy him a great meal next time. He thinks about the meal when he walks. Young-Seo covers Sung-Hoon and guides him to walk to the dining table. He sees the meal she prepared for him.

Sung-Hoon is surprised that Young-Seo can cook. She tells him that it’s not a big deal to cook. He tastes the dishes and tells her that they’re delicious. But she tells him to be honest. But his honest feedback makes her feel uncomfortable.

Ha-Ri meets with Young-Seo at the restaurant. Ha-Ri laughs after knowing her friend got the man she loves in the end. She congratulates Young-Seo. But Young-Seo doesn’t want to get the congratulation. She complains that Sung-Hoon told her that the food she cooked wasn’t good when it was first time to cook for a man. She thinks he should eat up the food.

Young-Seo blames Tae-Moo for calling Sung-Hoon when they were watching movie. Ha-Ri explains that Tae-Moo doesn’t know Young-Seo and Sung-Hoon are in love. It makes Young-Seo believe that Ha-Ri and Tae-Moo are dating. She mentions she ate with the president.

Ha-Ri denies. She explains to Young-Seo that she ate with Tae-Moo because she wanted to apologize to him. Young-Seo mistakes that Tae-Moo gave Ha-Ri a hard time. She thinks the guy should treat her friend well if he has feelings for her.

Da-Koo meets with his friends and tells them that Tae-Moo broke up with his girlfriend. The friend thinks Tae-Moo cannot get married because Da-Koo always steps in his love relationship. Da-Koo tries to explain it. But Chae-Rim stops Da-Koo and reaches out her hand.

Da-Koo grabs Chae-Rim’s hand and greets her. It makes her happy. Mi-Mo cooks chicken. She summons Joong-Hae and tells him to help her. Ha-Ri joins her parents. She finds out that Joong-Hae is sick. She tells him to go to the hospital. But he thinks he will be fine after he goes to the bathroom.

Sung-Hoon drives Young-Seo to the mountain. He tells her to go to work out. But she reminds him that she doesn’t wear the right shoes. He takes out the shoes he prepared. He wears the shoes for her. He’s happy to walk away. She has to follow him.

Young-Seo is tired after she hiking. She stops Sung-Hoon and sits on the rock to take a break with him. He hands over the water to her. She drinks it up and notes that he’s fine. He tells her that she will be strong like him if she comes to the mountain frequently.

Sung-Hoon reveals he did hiking with Tae-Moo. Young-Seo thinks her boyfriend was forced to do that. Because she knows Tae-Moo is a bad person. She complains that Tae-Moo bullied Ha-Ri. But Sung-Hoon thinks Tae-Moo is a good person. He points out that Tae-Moo did that because Ha-Ri tricked him first.

Sung-Hoon thinks Young-Seo should take the duty for sending Ha-Ri to the blind date. She gets angry because he always takes Tae-Moo’s side. She refuses to climb the mountain. Tae-Moo brings the drinks to Ha-Ri. She wants to buy him food. He rejects it because what he needs is her time.

But Ha-Ri insists on buying Tae-Moo food. She’s surprised that what he wants to eat is the hot dog. She tastes it and finds out that it’s just a normal hot dog. He reveals he went to eat the hot dog with his parents. She thinks he was happy when he ate the hot dog. She tells him the food she likes.

Tae-Moo thinks Ha-Ri is very different because she talked about the happy moments with him when he brought up his parents. He thanks her for letting him talk about his parents. She’s frozen after she heard what he said. But she’s woken up by the call.

Young-Seo thinks Sung-Hoon should date Tae-Moo when she comes down from the mountain. But she finds out that she’s lost. Sung-Hoon shows up. He blames her for making him be lost. She gets angry and tries to walk away. But she trips.

Sung-Hoon takes a look at Young-Seo’s leg. He finds out that it was hurt. He lets her to be on his back. She’s moved. He carries her to walk and he drops her on the bench. She finds out that he’s charming when he cares for her. She wants to go home sleeping with him. She kisses him. But he thinks she should go to the hospital first. He carries her away.

Ha-Ri arrives at the hospital. She sees Mi-Mo and joins her. She cares for her after she saw the wound on her arm. Mi-Mo tells Ha-Ri that she’s fine. She pulls back the curtains and lets her see Joong-Hae. Ha-Ri is shocked when she sees her father lying on the bed. She’s told that there’s no empty bed. She smiles after she saw her parents caring for each other.

Ha-Ri is told that Tae-Moo went on a blind date. She sees the colleagues off after the gathering. She sits on the bench at the bus stop. She tears up when she remembers she hurt Tae-Moo’s heart deeply. She gets on the cab and calls Tae-Moo.

Ha-Ri tells Tae-Moo to leave the hotel. She blames him for seeing another woman after he flirted with her. She confesses her feelings to him. He smiles after he realized that she’s in jealousy.