These are the Recap & Ending for Crash Course in Romance K-Drama: Episode 2. Chi-Yeol eats at Haeng-Seon’s mother’s restaurant. She hands over the dish to him. She tells him that the food belongs to him. Haeng-Seon’s mother slaps the back of Jae-Woo’s head. She asks him to go to serve food for Chi-Yeol. 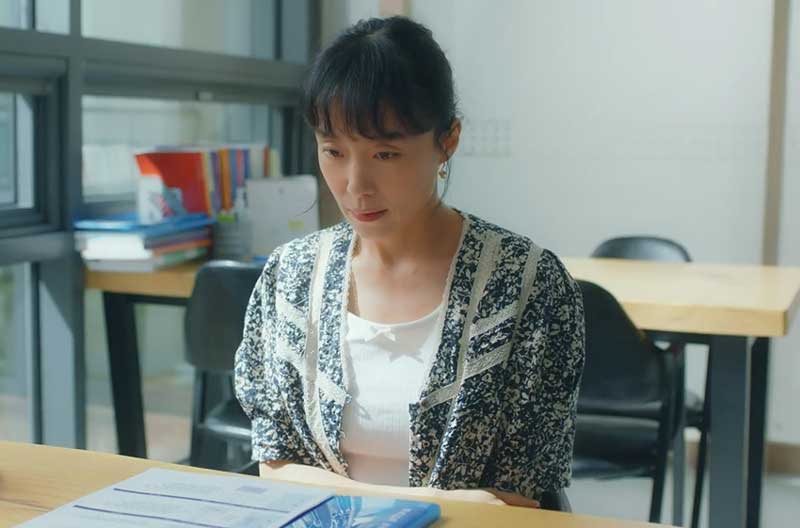 Note: From here on out there are specific plot spoilers for Crash Course in Romance K-Drama: Episode 2.

Haeng-Seon’s mother tells Chi-Yeol to eat at least twice a day. He reveals he’s preparing the teacher exam. He tells her that it’s his father’s wish. She thinks he’s a good son. She complains to him that her daughter doesn’t listen to what she said.

Chi-Yeol gets a call from someone. He goes to the hospital and sees his father’s dead body. He hugs his father to cry. The doctor tells Chi-Yeol that his father passed away because he had refused to get the treatment. Chi-Yeol walks on the street. He passes by Haeng-Seon’s mother’s restaurant. She asks him to get in her restaurant and have a meal.

Haeng-Seon serves Chi-Yeol the food. She notes that he’s crying. She thinks he was dumped by someone. Hae-E shows up with the luggage. Haeng-Seon reads the letter. She learns that Hae-E’s mother wishes her mother to take care of Hae-E.

Haeng-Seon runs her mother’s restaurant. She runs to the school to pick up Hae-E. She explains to her that she’s late because the customers came. Hae-E ignores Haeng-Seon and runs away. Haeng-Seon chases Hae-E and helps her take the bag.

Haeng-Seon asks Hae-E if she gets angry. She tells her that she will buy her an ice cream. Hae-E cries to tell Haeng-Seon that she wishes her to be her mother. She agrees to it and she wipes off her tears. Haeng-Seon goes to the school to pick up Hae-E again. She waves at her when she calls her. Hae-E calls Haeng-Seon mother. She runs in her arm. Haeng-Seon hugs Hae-E.

Haeng-Seon jumps rope. Yeong-Joo stops Haeng-Seon. She tells her not to blame herself. Haeng-Seon feels guilty because she didn’t know that Hae-E wanted to get into the academy. Yeong-Joo thinks it wasn’t Haeng-Seon’s mistake. She mentions Hae-E never told her wish to her. She adds that Haeng-Seon gave up her dream for Hae-E. She swears to beat anyone if he badmouths Haeng-Seon.

Chi-Yeol tells the doctor that he cried after he ate the food even if he still saw the student. She thinks it’s a good news. He’s happy to return to the school. He tells Dong-Hui that he wishes to eat the food which comes from Haeng-Seon’s restaurant.

Chi-Yeol eats the food. He finds out that it’s tasty. He swears not to go to Haeng-Seon’s place even if her food is delicious. But he throws out. Sun-Jae returns home. He sees Seo-Jin drinking. She tells him that she drank for the enrollment.

Sun-Jae goes to make Seo-Jin some honey tea. She hugs him from his back. She reminds him that he’s all she has. She tells him that she will take her life if something happens to him. She lets him go to study because she doesn’t need the honey tea. She places the cash on the plate. Someone takes away the cash.

The mothers wake up in the morning. Su-Hui runs with Mi-Ok. She tells her that there’re one hundred mothers in time. Mi-Ok is shocked. She goes to throw out because she drank too much last night. Haeng-Seon gets changed. She’s going to leave her house. But she finds out that she doesn’t take her phone. She gets back to her room to take her phone.

Chi-Yeol stops Haeng-Seon. He tells her that she cannot leave before she tells the time to him. She scolds him and runs away. She arrives at the academy. She finds out there’re many mothers lining up. She thinks she wouldn’t be late if Chi-Yeol didn’t block her way. She wishes him to have bad luck.

Chi-Yeon tries to have a seat on his chair. But he trips. The guy shows up. He tells the mothers that he’s going to give the numbers to them. Haeng-Seon tells God that she’s going to take back the curse she did on Chi-Yeon. She wishes to get the number. She takes over the last number from the guy. She’s happy to walk away.

Haeng-Seon returns to the restaurant when Chi-Yeon is picking up the food. She mentions her brother needs a phone. She swears to catch the thief. Haeng-Seon notes that Chi-Yeon is at her restaurant. She tells him that she was just kidding. She finds out that he was the guy who visited her restaurant in the morning. She tries to give the food to him. But he rejects it.

Chi-Yeon enjoys the food in his car. He remembers what Haeng-Seon said that she needs a phone. Yeong-Joo tells Haeng-Seon that Chi-Yeon glanced at her. She thinks the guy has feelings for her. Haeng-Seon laughs to mention Yeong-Joo turned her into a married woman.

Yeong-Joo complains that she did it because the women thought Haeng-Seon was a single mother. Haeng-Seon tells Yeong-Joo that she doesn’t need a boyfriend because she needs to earn money for Hae-E’s course. Hae-E returns home. She’s happy to thank Haeng-Seon for helping her get into Chi-Yeon’s course. She gives a bread to her.

Haeng-Seon sits on the bench to enjoy the bread when Hae-E sits with her. She tastes the bread and finds out that it’s very sweet. She tries to share the snack with Hae-E. But Hae-E rejects it because she doesn’t have a sweet tooth. Yeong-Joo shows up. Haeng-Seon leaves. Yeong-Joo asks Hae-E if Haeng-Seon ate something. Hae-E denies it.

Su-Hui is driving. She asks Su-A why she’s not happy. Su-A reveals Hae-E got into Chi-Yeon’s course. Su-Hui tells Su-A that she ran into Haeng-Seon when they lined up. Su-A mistakes that Su-Hui told the course to Hae-E’s mother. Su-Hui points out that everyone knows it. Su-A is upset. Su-Hui comforts Su-A that she’s smarter than Hae-E. Su-A tells her mother that she dislikes Hae-E.

Chi-Yeol sees the girl in his class. He tells the student to sign up his season 2. The girl signs up the season 2. Chi-Yeol complains it to Dong-Hui after the class. He tells him that he wants to drive the car on his own. Dong-Hui hands over the phone to Chi-Yeol. He wants to buy him a new phone as well. But Chi-Yeol rejects it.

The girl is excited to talk with someone over the phone. She tells her that she signed up Chi-Yeol’s course. She leaks that Chi-Yeol was upset when she sat in front of him. She wishes to get married with Chi-Yeol. But she was shot.

Chi-Yeol visits Haeng-Seon’s restaurant. He orders the food and gives a phone to her. He leaves her restaurant. She’s shocked after she saw the new phone. Yeong-Joo mentions what she said that Chi-Yeol had feelings for Haeng-Seon. But Haeng-Seon thinks it was just an extra phone.

Episode 2 of Crash Course in Romance ends with Jae-Woo telling Haeng-Seon that Chi-Yeol was the tiger at the bus stop. Chi-Yeol denies it. He tries to flee. But Haeng-Seon stops Chi-Yeol. She takes off his sunglasses and recognizes him. Someone shoots them when they have a fight.