This is the Recap & Ending for Disney Plus Crazy Love K-Drama: Episode 8. Go-Jin tells Shin-A that he doesn’t lose his memories. He mentions she scolded him at his house that night. She passes out. He pours water to her, waking her up. 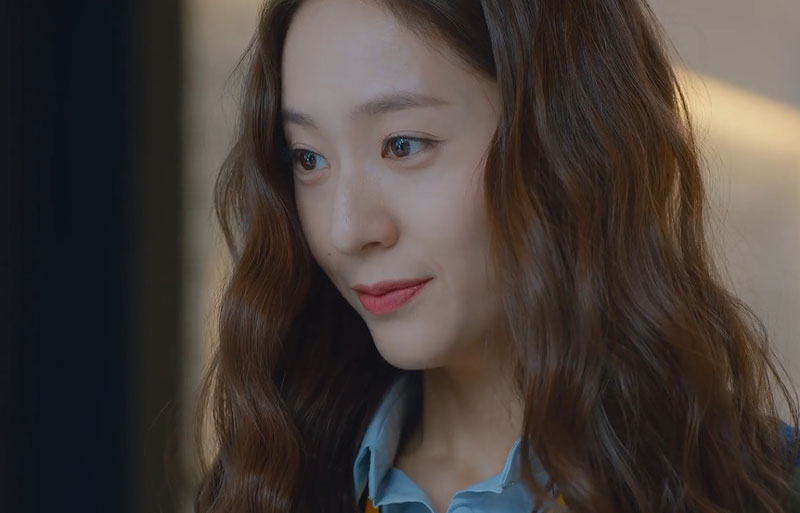 Note: From here on out there are specific plot spoilers for Disney Plus Crazy Love K-Drama: Episode 8.

Go-Jin wipes the water off Shin-A’s face. He mentions she told him that she’s his fiancee, thinking she’s good at acting. He tells her that she needs to repay for what she did to him. He wants to seize her father’s house. She gets on knees to him. She asks him for his mercy.

But Go-Jin tells Shin-A that he doesn’t forgive people. He asks her to tell him who got her to do that. She denies and cries to tell him that she will do anything for him if he forgives her. She returns home with the contract. She remembers he got her to sign the hostage contract.

Shin-A buys Go-Jin a cup of coffee. But he holds the coffee to walk to her after he tasted it. She has to step back. He pours out the coffee because he cannot accept the temperature of the coffee. She takes over the cup from him. She goes to buy another coffee for him. He’s happy to dance.

Go-Jin sleeps on the couch when Shin-A cuts lemon for him. She brings the drinks to him. He tells her to clean up the house. Go-Jin arrives at his company. Pil-Sun tells him that she will take his side no matter what happens because he paid his son’s hospital.

Go-Jin realizes that it was done by Shin-A. He tells her to repay the money. Ok-Hee goes to drink water in the evening. She’s startled by Shin-A who drinks without turning on the light. She turns on the light and asks her what happened. Shin-A tries to tell her friend that Go-Jin doesn’t lose his memories. But she remembers that the guy told her not to tell his secret to others.

Yang-Tae’s books are released. The employees of Gotop Education finds out that Yang-Tae stole their ideas. The follower tells the good news to Yang-Tae that their books sold out. Yang-Tae laughs and he gets a call from Eun-Jung who tells him that Go-Jin doesn’t come to the company. She thinks he passed out.

Shin-A visits the lawyer Joon-Pal. She tells him what she did to Go-Jin. He thinks she’s gold digger. He tells her to listen to Go-Jin. She walks on the street. She wonders why the lawyer knew her name. She gets a call from Go-Jin who asks her to come to the beauty salon.

Shin-A takes the cab to go to beauty salon. The girls dress up for Shin-A after Shin-A told them that Go-Jin asked her to come. Go-Jin is lost after he saw Shin-A’s new looks. The seller brings the dress to Soo-Young. She thinks she’s going to stun everyone. But Soo-Young only wants to stun Go-Jin.

Shin-A gets off the car. Go-Jin lets her hold his arm. She goes to the restroom. He joins Yang-Tae and sees the watch he wears. He thinks the watch looks good. Shin-A takes a look at her leg. She finds out that it was hurt. The waiter drops the medicine into the wine. He hands over the wine to Go-Jin.

The follower reports to Yang-Tae that some of the study guides in the books are wrong. Go-Jin tells Yang-Tae that he intended to put the wrong questions into the material. He hands over the wine to him. Yang-Tae is furious to drink up the wine. He passes out.

Soo-Young goes to the restroom. She sees herself in the mirror. She thinks she’s perfect. She helps Shin-A before she trips. She thinks she looks beautiful, telling her to wear heels. She learns that she’s Go-Jin’s secretary. Yang-Tae is sent to the hospital. Go-Jin feels happy.

Soo-Young shows up. She introduces herself to Go-Jin. He agrees to be her friend. But he introduces Shin-A to her as his fiancee. He holds Shin-A’s hand and takes her away. Soo-Young follows Go-Jin and stops him. He hugs Shin-A and kisses her. Se-Gi returns home. He takes off his watch.