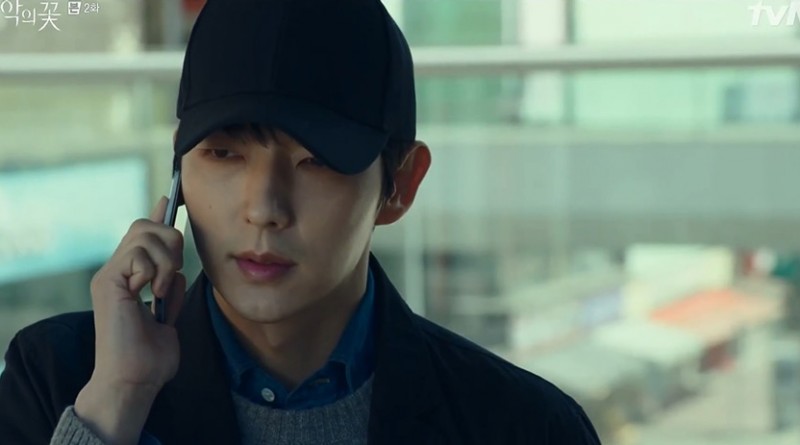 This is the Recap & Review for Netflix Korean drama Flower of Evil: Episode 2. Hee-Sung buys two drinks and puts it on the table. Ji-Won asks for his ID. He gives it to her. She learns that he is 28 years old, and asks if he just moved there. He doesn’t reply her, and thinks it’s a good place to start over. 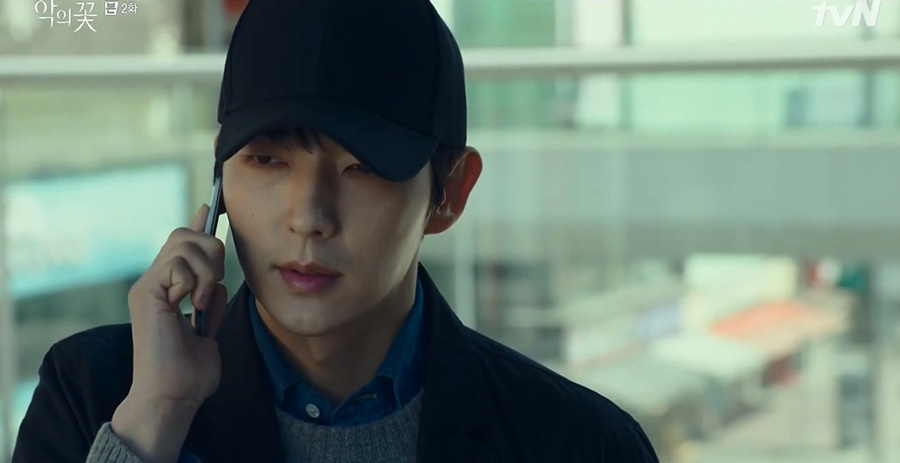 Note: From here on out there are specific plot spoilers for Flower of Evil: Episode 2.

Hee-Sung learns how to smile when Ji-Won falls asleep. He prepares the breakfast for her, and she startles him from his back. She tells him that she dreamed of their first encounter, and thinks the sizzling rice soup is delicious. He feeds her the soup, and she thinks it’s tasty. He smiles and reveals the broth is cooked with dried pollack.

Ji-Won wants to help Hee-Sung. He tells her to bring out the kkakdugi. She tries it but fails. So he tells her to wake their kid and washes her up. Ji-Won dries hair for Eun-Ha. Eun-Ha asks Ji-Won who is taller between her and Soo-Young. But Ji-Won doesn’t know who Soo-Young is. Eun-Ha sighs and wants to ask Hee-Sung about it. She thinks her mom isn’t good at anything.

Eun-Ha takes the hair dryer and asks Hee-Sung to dry hair for her. He asks her about her mom. She says that it’s a secret of her and mom. He points out that she promised not to keep secrets from him. She laughs and tells him that Ji-Won went to clean up his workshop. He is shocked.

Ji-Won opens the workshop, and Moo-Jin wakes up from the basement. Hee-Sung arrives at the workshop, and Ji-Won asks him if he broke the teacup. He says that he was careless yesterday, and take the piece of the teacup away as he worries that she will get hurt. He takes her to eat the breakfast, and she asks him who he had tea with.

Hee-Sung reveals it was a customer. But Ji-Won thinks it was someone he was happy to see. Because hot beverages are for long chats. She thinks she knows him better than he knows himself. She asks him who he chatted as she knows that he didn’t have many people to share with.

Hee-Sung tells Ji-Won that it was a friend. She asks him if it was the one who appeared at their wedding. He reveals it was a friend from middle school, and they ran into each other. She is happy and mentions what he said that he was a loner as a boy.

Hee-Sung says that he felt happy to see the friend. Ji-Won thinks she did it right to tell her husband to go to reunions. She realizes she didn’t wipe his furniture clean. He tells her that he is hungry, and wants to enjoy breakfast first.

Hee-Sung closes the door and smiles at Ji-Won. She holds his head and asks about his gaze. She thinks she is the prettiest woman on earth in his mind. But he takes her away.

Seo-Young visits the old lady Moon-Ok, but she finds out that she is dead in her house. Seo-Young is startled. Jae-Sub and Ji-Won arrive to check Moon-Ok. Jae-Sub wonders why Moon-Ok’s thumbnail is missing. Ho-Joon remembers the Yeonju City serial murder case, and thinks Moon-Ok is like the victims.

Ji-Won asks Ho-Joon if the case is what Moo-Jin mentioned last time. He says that the culprit took his life before he got arrested. So it became a close case. He adds that people forgot it because of World Cup. She asks him if he thinks someone imitated a case that happened over 18 years ago.

Jong-Goo breaks into the room and wants to take a look at his mom Moon-Ok. But he is stopped by the police. He rages to ask who killed his mom. Hee-Sung goes to see Moo-Jin. Moo-Jin asks Hee-Sung why he did it on him. He thinks he committed a crime. Hee-Sung asks Moo-Jin if he remembers what happened 18 years ago.

Moo-Jin ties Hyun-Soo on the tree in his friend’s help, and tells him that he won’t let him go away. Hyun-Soo thinks he should twist Moo-Jin’s neck. Moo-Jin gives Hyun-Soo a slap and tells him not to glare at him. Hyun-Soo tells Moo-Jin that he will break his skull next time.

Moo-Jin thinks Hyun-Soo saw his dad committing murder and helped him. Hyun-Soo provokes Moo-Jin that he is scared of him. Moo-Jin throws the stone at Hyun-Soo with his friends.

Hyun-Soo tells Moo-Jin it’s his turn after 18 years. He puts the hammer on his face, and tells him to inform him if it’s hurt. Moo-Jin is scared and tells Hyun-Soo it’s how kids grow up. He adds that it wasn’t just him. Hyun-Soo takes back the hammer, and says that he would’ve covered the floor with a plastic cover if he wanted to kill him.

Moo-Jin asks Hyun-Soo what he wants from him. He wants to give him all he has if what he wants is money. He says that he’s scared and frightened, and he cannot feel his arms and legs. Hyun-Soo tells Moo-Jin that he is like his dad, and he asks him to try his best to make him pity him. He adds that he won’t feel a thing.

Hyun-Soo tells Moo-Jin that he makes him want to cover the floor with a plastic cover. The doctor tells Ji-Won that the marks on Moon-Ok’s back are violet. She thinks the dead was on the floor for 8-9 hours. She checks the dead again, and says that she doesn’t see any ligature marks. She adds that the rope was there for no reason.

The doctor adds that the dead was stabbed and cut eight times, and thinks she died due to excessive bleeding. She finds out Moon-Ok’s ankle broke after she died. Ji-Won asks if the culprit broke it after she killed the dead. The doctor thinks what Ji-Won says is right.