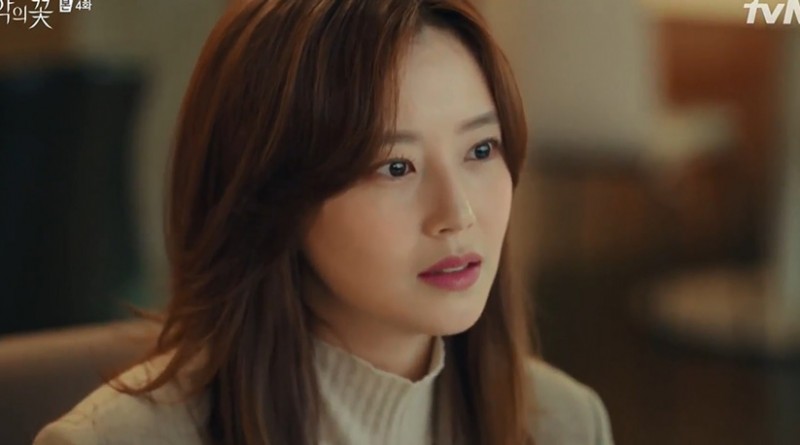 This is the Recap & Review for Korean drama Flower of Evil: Episode 4. Hee-Sung and Ji-Won avoid the rain together. She laughs as she wears the new clothes and new shoes, but she encounters the rain at her first date. She tells him that it’s a date that two people have fun together. 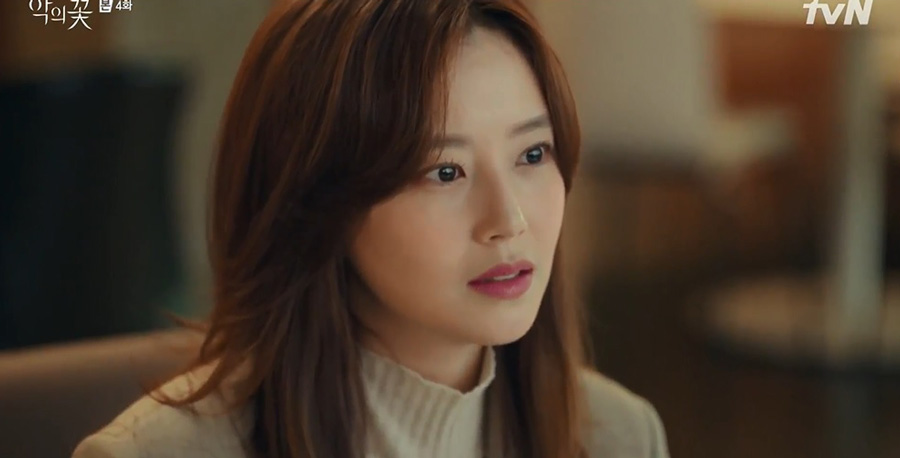 Note: From here on out there are specific plot spoilers for Flower of Evil: Episode 4.

Hee-Sung tells Ji-Won that he isn’t interested in her. But she says that she is interested in him, and asks him why he spent time with her on their day off. He claims that it’s because she will bother him less if he goes out with her once.

Ji-Won mentions what the fried chicken store owner said that Hee-Sung’s eyes linger on her each time she walks by. The friend asked Ji-Won if she and Hee-Sung were dating. Ji-Won asks Hee-Sung if only he doesn’t know that he likes her.

Ji-Won asks to play rock-paper-scissors and have the loser stand out in the rain for 30 seconds. Hee-Sung doesn’t want to play the silly game, but he gives out the rock. She wins and push him into the rain. He smiles when he sees her smile. But his smile disappears when he sees his dad Min-Seok.

Ji-Won asks Hee-Sung what happened. He gets angry and asks her why she likes him. He leaves. She is in tears.

Mi-Ja asks Hee-Sung why he got married and got himself in the mess. She mentions what she told him to go live abroad. She thinks he shouldn’t live like other everyone else, and tells him not to ruin their lives. She worries that people will find out about them.

Mi-Ja yells at Hee-Sung that she will kill herself in front of him if it happens. He gives the drinks to her, and comforts her that nothing will happen. She drinks it up and feels sorry for slapping him. She asks him if it’s hurt.

Hee-Sung says that it’s fine. Mi-Ja blames herself for not controlling herself, and tells him to her hands together if she gets worked up again. She asks him if Ji-Won knows something. He says that his wife is in charge of the case. She is furious to break the glass bottle and mentions she told him that his wife will make things worse.

Hee-Sung cleans the pieces of the glass, and comforts Mi-Ja that it will help them deal with it a lot quicker. She tells him that she didn’t like Ji-Won from the start, and thinks Ji-Won is two-faced. She blames him for marrying her. He tells her that the killer was caught on CCTV, and he left bloodstains at the scene. He comforts her that the case will get solved.

Mi-Ja glares at Hee-Sung. He tells her that they may be after Hyun-Soo but it won’t lead to Hee-Sung as long as she stays on his side. She tells him to leave, but asks him to visit them as she thinks the house is too big for two of them. But he points out that it’s not just they two in the house.

Man-Woo returns home, and the maid tells him that his son needs to eat. He goes to take care of Hee-Sung. Woo-Cheol takes a look at the papers, and learns that Min-Seok has a daughter. Ji-Won admits it and tells him that the person is Hyun-Soo’s big sister. Ho-Joon mentions Hae-Soo’s the same age as Ji-Won.

Jae-Sub tells Jae-Sub to meet Hae-Soo. But she tells him to meet Hae-Soo as she already met the victim’s family. But he points out that people find him uneasy because he is so charismatic. Ho-Joon thinks people don’t like Jae-Sub. Jae-Sub intends to throw his notebook to Ho-Joon. Woo-Cheol stops the two, and tells Ji-Won to check Hae-Soo’s address and phone number.

Hae-Soo walks to the person who lies on the floor, and asks him if it’s hurt. He says that it doesn’t sting, but it smells weird. She tells him that it’s the smell of liquid latex. The director shows up and tells Hae-Soo to make the man look like he just died. He asks her to make the wound look fresher.