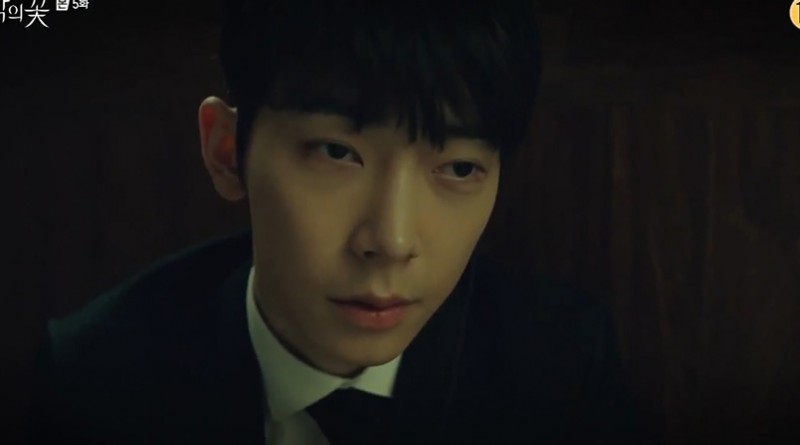 This is the Recap & Review for Korean drama Flower of Evil: Episode 5. Hee-Sung orders the beer and he is going to pay. But the electricity goes out. Ji-Won takes out the candle and looks for the lighter. He uses his lighter to light the candle for her.

Note: From here on out there are specific plot spoilers for Flower of Evil: Episode 5.

Ji-Won finds out that Hee-Sung goes out but he doesn’t leave. It snows. He catches the snow, and he walks away when the power is back on.

Ji-Won complains to Hee-Sung that he hit on her first so she confessed her feelings to him. But he responds by playing hard to get. She gets angry and tells him that she hates it. He reminds her that she should go home. She thinks it isn’t his business, and asks him why he called her.

Hee-Sung tells Ji-Won that her mom seeks him out worried when she doesn’t come home. She asks him for a piggyback ride, and claims that she is too exhausted to walk. He ignores her and intends to walk away. But she tells him that she knows that he likes her. He walks to her and asks if she wants to know what kind of person he is.

The woman steps in the room and asks Hee-Sung if he called for a cab. He denies. She asks what the taxi is doing at my inn for no reason. He says that he needed a cab-ride, so maybe he will ask. He walks to Kyung-Choon. Kyung-Choon tells Hee-Sung to get in his taxi.

Hee-Sung gets in Kyung-Choon’s taxi. Kyung-Choon asks Hee-Sung how he managed to stay hidden so good. He asks him about Mi-Sook. The doctor Hyun-Suk treats Moo-Jin and mentions the woman Mi-Sook’s body wasn’t found. He says that he is scared to talk about it. Moo-Jin remembers the woman who was killed by Min-Seok.