This is the recap for K-Drama Happiness: Episode 2. Tae-Seok arrives at the shelter. He sees the blood in the house. Ji-Soo reports to him that the guy took the medicine because he was sick. Seung-Young watches the footage. He sees the dead bodies was carried out from shelter. 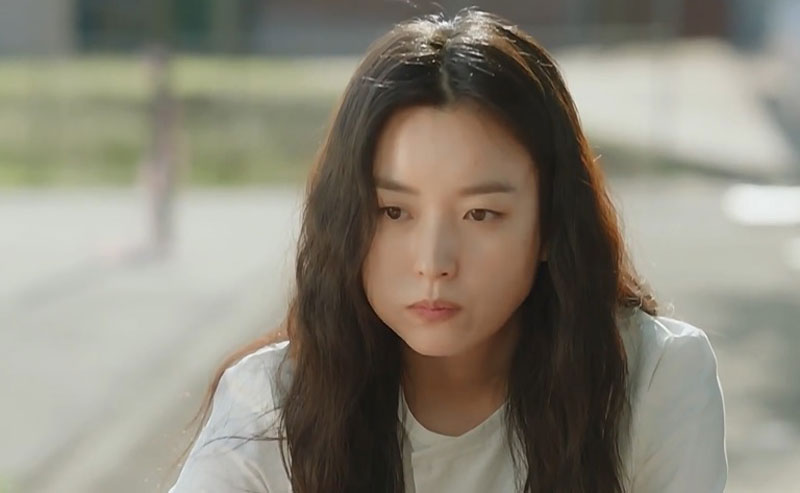 Note: From here on out there are specific plot spoilers for K-Drama Happiness: Episode 2.

Sae-Bom shows up. She tells Seung-Young that she got released. He mentions the reporter contacted him, asking for the details. She tells him not to leak it, and reveals she got a new house. She adds that she decides to marry Yi-Hyun.

Sae-Bom tells Yi-Hyun that she needs a place to live when she’s eating. Ji-Soo brings the drinks to Sae-Bom. She tells her that it’s a compensation for the clothes she burned. Sae-Bom wants to take the chance to be a friend of Ji-Soo. But Ji-Soo walks away.

Sae-Bom is disappointed. Yi-Hyun takes over the drinks from her. She tells him that she chose him because she has feelings for him. He agrees to it even if he knows that he’s going to get married with her.

Seung-Young notes the wound on Sae-Bom’s palm. She tells him that it was done by Jong-Tae. She notes that he just touched his neck. She asks him about it. But she’s told that he’s fine. Seung-Young gets a call from Yi-Hyun. She goes to pick up his phone. But she finds out that Seung-Young is missing after she got back to the restaurant.

Seung-Young goes to see the reporter. He gets in his car after he was told that he will get a huge money. He returns to the training room, picking up a piece of glass from the ground. He looks at his neck in the mirror. He finds the wound on his neck. He remembers Jong-Tae hurt him. Sae-Bom knocks at the door from outside. He goes to see her.

Jung-Kook hands over the photo to Yi-Hyun, thinking he reached his goal. He puts the rice cakes into his car after he placed the photo. Jung-Kook tells Yi-Hyun that Tae-Seok attacked the chief when he worked for the company. He tells him not to be close to the guy.

Sae-Bom drives to the parking lot. She remembers what Seung-Young said that nobody got released except her. She gets in the car but she gets bumped by the kid. The kid apologizes to Sae-Bom. He rides the bicycle away. She leaves the parking lot and gets into the elevator. She runs into a guy Se-Hun who wears a mask.

Sae-Bom returns home and takes off the mask. She wears the slippers and sees the photo of her and Yi-Hyun. Yi-Hyun tells her that he got it from Jung-Kook. But she points out that it wasn’t a good memory when she takes a look at the photo with him.

Sae-Bom takes out the rice cake from the box. She eats it and goes upstairs. But she finds out that the door cannot be opened. Seo-Yoon shows up. She tells Sae-Bom that the door was blocked by the landlord. Sae-Bom kicks away the door and tells Seo-Yoon to report it to the police because the landlord broke the law.

Sae-Bom visits Unit 602. Hae-Sung opens the door and gives his business card to her. She learns that he’s a lawyer after she took a look at the business card. He throws the rice cake into the trash can. He tells his wife So-Yoon not to trust the strangers. So she tells him to go to work.

Sae-Bom rings the bell of Unit 602. She is close to the door, trying to listen to something because nobody replied her. Min-Ji shows up and startles Sae-Bom. Sae-Bom smiles to give the rice cake to Min-Ji. But it seems that Min-Ji doesn’t like the rice cake.

Min-Ji returns home and summons Joo-Hyeong. She asks him why he didn’t come out when Sae-Bom visited him. He explains that he was washing his hair. She throws the rice cake to the table, and sits in the bed. He gets her the water when she’s going to take the pill. She complains to him about her work.

Joo-Hyeong apologizes to Min-Ji, and massages her leg. He leaves the room with her. The woman Sang-Hee climbs out under the bed. But she leaves her scarf to the floor. Yi-Hyun takes Sae-Bom to their bedroom. She sees two beds. He tells her that he will move his bed out if she feels uncomfortable. But she tells him that she likes the idea.

Sae-Bom lies in the bed. She tells Yi-Hyun that her parents kept fighting because of the small room, and she had to sleep in her father’s car. She tells him that she wanted to get a place which belongs to her, and she reached her goal. He notes that she falls asleep. He goes to cover with quilt for her, and turns off the light.

Sae-Bom is awaken up by the nightmare that Jong-Tae told her that she will be a monster like him. She hears the sound from the upstairs. Yi-Hyun wakes up and hears the sound as well. He wants to resolve for his lover. But she rejects it.

Yi-Hyun gets a call from Tae-Seok. He goes to see him. Tae-Seok tells Yi-Hyun that he wouldn’t get married with Sae-Bom if he didn’t help him. He asks him to go to catch the culprits who sell pills. Yi-Hyun rejects it. But he gets a call from the chief who asks him for working with Tae-Seok.

Tae-Seok tells Yi-Hyun to pretend to be Jong-Tae, meeting with the deal. He hands over the phone of Jong-Tae to him. Yi-Hyun complains that he doesn’t have any money. Tae-Seok puts a bag of cash on the table. He tells Yi-Hyun to use it.

Sae-Bom gets a call from her mom Bok-Nam who blames her daughter for not reporting to her that she moved in a house. Sae-Bom explains that she got a mad human disease. She reveals she dreamed to hurt someone. Bok-Nam worries about Yi-Hyun. Sae-Bom tells Bok-Nam that she will call her after everything is fine. She pretends to cough, and ends the talk. She hears the sound again when she sees the flyer of the gym on the table.

Seo-Yoon hands over the note to Sae-Bom when she opens the door. Sae-Bom takes a look at the note. She learns that it’s the repaying of the rice cake. She tells the little girl to take her parents to visit the restaurant. Seo-Yoon agrees to it. She asks Sae-Bom if she’s actually a cop. Sae-Bom admits it. She shows the design of her clothes to her.

Seo-Yoon thinks she can be a cop like Sae-Bom if she’s not sick. Sae-Bom reveals she was in illness as well. She comforts Seo-Yoon that she will be a strong woman like her. Seo-Yoon is happy to follow Sae-Bom after knowing she’s going to fight.

Sae-Bom visits Joo-Hyeong and complains to him about the sound he made. He explains that he moved the furniture, and promises not to do it again. She decides to leave after she got the answer. But he keeps her and mentions the rice cake.

Sae-Bom is surprised that Joo-Hyeong knew her because she didn’t meet with him. He mistakes that Seo-Yoon is Sae-Bom’s daughter. He tells her that the kid is beautiful like her. He closes the door. Sae-Bom asks Seo-Yoon if she encountered Joo-Hyeong. Seo-Yoon tells Sae-Bom that she ran into the guy. She reveals Joo-Hyeong keeps staying at home.

Sae-Bom tries to see Seo-Yoon because she needs to go to work out. The little girl is lost to leave. Sae-Bom lets the kid join her after knowing she’s alone at home. The two walk in the gym. Seung-Beom asks Sae-Bom to write down the information of her before she exercises. She does it.

Seung-Beom tells Sae-Bom that she cannot exercise in the gym because she’s a tenant. So she decides to leave. But he keeps her and tells her that she can exercise there if he’s the personal trainer of her. She rejects it and walks away with Seo-Yoon.

Seo-Yoon tells Sae-Bom that she knew the rule of the gym. She adds that she thought Sae-Bom could resolve the problem.