This is the recap for Netflix K-Drama Hometown Cha-Cha-Cha: Episode 5. Hye-Jin wakes up and finds out that she slept with Du-Sik last night. She’s startled to take away her bag but she leaves the umbrella on the couch. She opens the door and leaves the house. 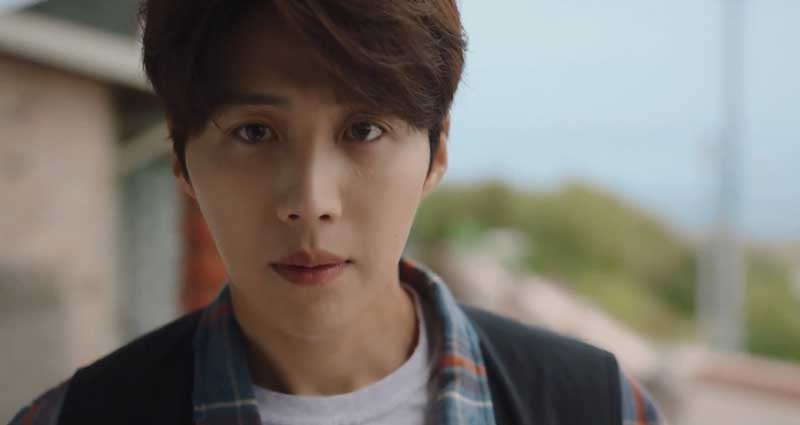 Note: From here on out there are specific plot spoilers for Netflix K-Drama Hometown Cha-Cha-Cha: Episode 5.

Nam-Sook spots Hye-Jin when she’s drinking milk. She tries to call her. But Hye-Jin ignores Nam-Sook and walks away. Nam-Sook takes a look at the house. She smiles and takes out her phone. She texts the message to neighbors and tells them what she saw to them.

Mi-Seon shows the message to Hye-Jin when she just goes home. Du-Sik wakes up and finds the umbrella Hye-Jin left. Hye-Jin remembers the things she did with Du-Sik when she was drunk. But she doesn’t know how she got into his house. Hye-Jin decides to go to the clinic with Mi-Seon. But Mi-Seon needs to go to bathroom at that time.

Du-Sik admits it and reveals Hye-Jin drank his wine. He wipes her lips with the tissue when she’s eating ox blood. She’s furious to take more tissues to wipe her lips because she worries that he made people think about their relationship in a wrong way.

Du-Sik leaves the restaurant with Hye-Jin. He tells her to go to the coffee shop with him because he wants to make a cup of coffee for her. It makes her think that he has feelings for her. She tells him not to fall for her because they’re different people. He’s furious to walk away.

Hye-Jin thinks she’s more outstanding than Du-Sik. But Mi-Seon thinks Hye-Jin is a luck girl because Du-Sik graduated from Seoul National University. Hye-Jin asks Mi-Seon why Du-Sik isn’t successful since he graduated from such a great school. Du-Sik reveals Du-Sik had been missing for five years, and nobody knows what he did in the period of time.

Mi-Seon tells Hye-Jin to judge men from the her heart. Hye-Jin smiles to mock Mi-Seon. She mentions she had feelings for Eun-Cheol when she saw him the first time. Mi-Seon asks Hye-Jin if she learned a lesson after Gang-Uk dumped her. Hye-Jin is furious to leave the room. Mi-Seon realizes that she said something wrong.

It flashes back. Hye-Jin shows up in the club. She’s going to go to see Gang-Uk. But she hears him telling his friend that he doesn’t like her at all because of the poor things she wears. Hye-Jin takes a look at her shoes and tries to leave. But she finds out that Sung-Hyun is standing in front of her. She smiles at him and walks away.

Gam-Ri, Mat-Yi and Sook-Ja take a look at the flowers. Du-Sik takes a photo of them. Sook-Ja notes it. She covers her face with her hand, and tells Du-Sik to take photos of the flowers instead of them. He praises the looks of the three old ladies. It makes them feel happy. He catches the chance to take another photo of them.

Nam-Sook brings up Cho-Hui and thinks the woman is more beautiful than Hwa-Jeong. Hwa-Jeong is furious to break the wood. She thinks it’s not her business because she got a divorce with Yeong-Guk. Nam-Sook points out that Yeong-Guk still cares for Hwa-Jeong. She thinks she’s old. It makes Hwa-Jeong get angry.

Yeong-Guk tries to text Cho-Hui. But he cannot decide it. Yong-Hun shows up and cheers Yeong-Guk up. Du-Sik walks around and takes some photos. He spots Sung-Hyun who is going to fall off the wall when he tries to take a photo of the lighthouse. Du-Sik holds the belt of Sung-Hyun’s camera and saves him.

Sung-Hyun is interested in Du-Sik’s camera. He wants to buy it. But Du-Sik rejects it because the camera is his treasure. He takes Sung-Hyun to the mountaintop to enjoy the seascape. Sung-Hyun finds out that he starves. Hye-Jin walks Mi-Seon and tells her that she doesn’t remember what she did last night. They run into Cho-Hui and learn that she’s a teacher.

Du-Sik takes Sung-Hyun to the restaurant. He brings the foods to him. Sung-Hyun likes the food immediately after she tasted the soft meat. He wants to introduce the restaurant to his show. Du-Sik mistakes that Sung-Hyun is a YouTube Blogger. Sung-Hyun doesn’t explain it, and enjoys the meal.

Yi-Joon is doing calligraphy. Hwa-Jeong accompanies him. He tells her that his teacher is Cho-Hui. She feels painful in her teeth. Cho-Hui takes a look at Yi-Joon’s resume. She finds out that Hwa-Jeong and Yeong-Guk are the kid’s parents. She gets a message from Yeong-Guk who wants to ask her out.

Sung-Hyun tells Du-Sik that he likes all of the dishes on the table, except the one Du-Sik cooked. Du-Sik is furious to have a fight with Sung-Hyun. Sung-Hyun tries to prove what he said is true. So he calls Jong-Won. But the guy doesn’t pick up his phone. Du-Sik thinks Sung-Hyun is a liar.

Hye-Jin is doing yoga at home. She tries to relax her body but she keeps remembering what Du-Sik said to her. She’s upset to put her head on the floor. She wears a red dress and takes a look at herself from the mirror. She tries to get Mi-Seon to leave with her because she needs a assistant to help her teach the students. But Mi-Seon is in the bathroom. She tells Hye-Jin to ask Du-Sik a favor.

Hye-Jin arrives at the school. Du-Sik is waiting for her. She learns that her best friend betrayed her. Yeong-Guk runs into Cho-Hui and mentions the message he sent to her. She explains that she didn’t reply him because it was late. Yi-Joon shows up. Yeong-Guk is happy to introduce his son to Cho-Hui. His smiling is frozen when he sees Hwa-Jeong.

Du-Sik walks Hye-Jin. But he keeps a distance to her, and tells her that he came there because of work. Hye-Jin and Du-Sik walk into the classroom. They dance in front of the students and teach them how to protect their tooth. Hwa-Jeong follows the two to move. Yeong-Guk stares at her with dislike. But he moves after he saw Cho-Hui’s moving.

Hye-Jin gets the students to applaud after Yi-Joon answered the question about teeth correctly. Yeong-Guk lifts his thumb to praise his son. But he sees the blue bracelet Cho-Hui wears. He’s embarrassed to smile. Bo-Ra tries to tell the students that Hye-Jin and Du-Sik slept together. But Yi-Joon blocks her mouth. The students rush out of the classroom. Yeong-Guk tries to carry the chairs for Cho-Hui. Hwa-Jeong mocks Yeong-Guk and reveals he never did any housework at home.