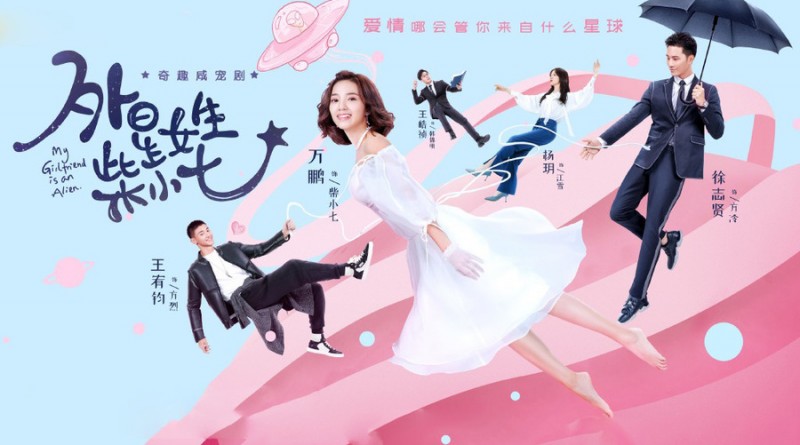 This is the recap of My Girlfriend is an Alien Chinese Drama 2019 Episode 1. Xiao Qi is an alien who saves Fang Leng from the traffic accident. But she lost her signal, and he picks it up. She owns debt from Ms. Chai, so she becomes a deliver woman. She runs into him again when helping Fang Lie flee, and knows that Fang Leng is the earth man she looks for.

My Girlfriend is an Alien Chinese Drama 2019 Recap: Episode 1 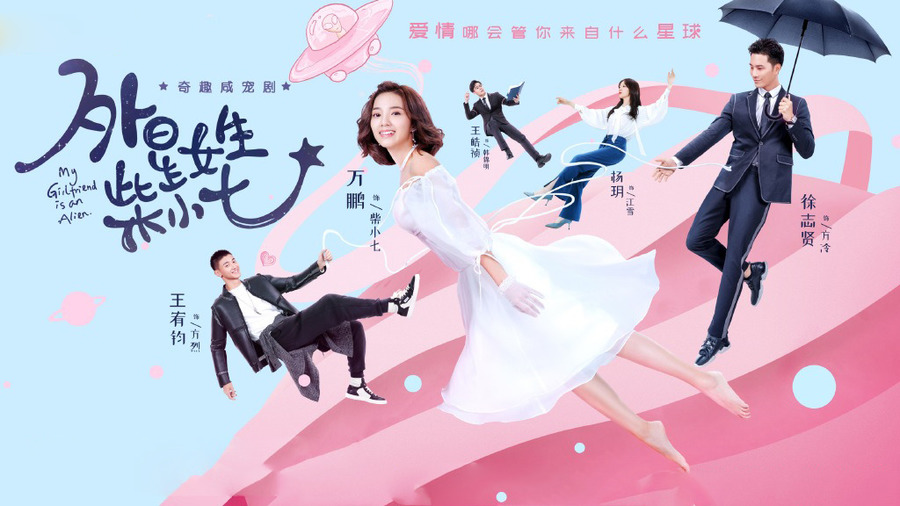 Here is the recap.

The man President Fang drives at the highway and meets an accident. He climbs out from his car but passes out. The alien Xiao Qi shows up and picks up the clothes on the ground. She wears it and smells the odor of male hormone which comes from President Fang. She saves the him. The car explodes, and Xiao Qi’s detector drops when she protects him. She gets hurts and spits the blue liquid on his palm. She is swung into the water, and the liquid condenses into a sapphire.

The old man Jian Guo is fishing, and Xiao Qi walks out of water, her neck turns around 360 degrees. She asks him if it’s Northern Hemisphere, but he is scared to flee away. She thinks earth people aren’t enthusiasm, and takes his seat. The tortoise drops on her knees, and she wants to throw him away. But the tortoise introduces himself as her personal secretary Kubri. She laughs and asks him how he turned into it, and he complains that he dropped into water because she saved the earth male. Kubri adds that his brain disk got eaten by the tortoise, and he had to control the tortoise to contact her.

Kubri says that he is using low frequency sound wave to deliver sound, and it can only be heard by Xiao Qi. He says that the spaceship returned, and they all fell behind. Xiao Qi comforts Kubri that it will be fine if she contacts Headquarters with the detector. But she finds out that her detector is lost and guesses it’s on the male she saved. Kubri asks Xiao Qi if she remembers the looks of the male. She says that she doesn’t remember his looks but remembers his body.

Fang Leng arrives, and the girls try to approach him but get blocked by the bodyguards. The reporter asks for his opinion to the scene of forced marriage. He says that it’s unbearable to spend love, but love is about two people. Fang Leng tells Secretary to call the brides, and claims that he will make them clear the relationship.

The first bride meets with Fang Leng and thinks he didn’t remember her after having meal. Secretary introduces the bride Yan Li as a model, and she met with Fang Leng at the charity dinner. Fang Leng tells her that he can send her to Paris attending the shooting of VOGUE with the ticket, and reminds her that she will become the super model. Yan Li takes the ticket and is happy to leave.

The brides hand in hand to walk out, and reporter asks them to speak out about how Fang Leng played girls. But Yan Li tells the reporter to respect their privacies. Secretary gives the data to Fang Leng and thinks his amnesia to women happens to thunderstorm day, and asks him if he wants him to look for new girlfriends. Fang Leng rejects it and asks about the traffic accident.

Secretary gives the blue stone to Fang Leng and reveals he took it when he is in a coma. But Fang Leng says that the stone doesn’t belong to him, and asks the technical department to look into the stone.

Kubri thinks Xiao Qi didn’t resist the temptation of earth male’s chest muscle and leave spaceship to save him. He mentions what earth people said that there is a knife on the sex, and thinks she involved him. Xiao Qi comforts him that she is trying to draw the details, but Kubri points out that the drawing doesn’t show the face of the man.

Xiao Qi steals the dress from the clothing shop and asks Kubri what he thinks. He reminds her not to get corroded by earth people, and complains that she wore them. Xiao Qi points out that she dressed up earth people is to find the signal. She finds the wedding dress and decides to wear it to go out, but he reminds her that it’s only worn during the wedding. She wears it but gets chased by security guard.

She stops when seeing the cars, and thinks they will explode. So she is scared to squat and releases energy wave. People are frozen, except Fang Leng. He stares at her until she leaves. Doctor thinks the passing away of Fang Leng’s mother affected his subconsciousness, so he forgot the female he knew when it was raining. Fang Leng asks Doctor if he will get hallucination, but Doctor denies and thinks Fang Leng just got too much pressure.

Fang Leng thinks Doctor caused him to get rid of many girls, but Doctor points out that Fang Leng concealed the thing. Fang Leng says that he didn’t intend to do it. Doctor mentions Fang Leng became the president of F Group under his stepmother’s overseeing. He reminds him to get cured so that they won’t catch his weakness.

Xiao Qi arrives at the party and is excited that the party is about muscle men. Kubri reminds Xiao Qi that they need to look for the earth person. She says that she is looking for him and walks into the club. She sees men jumping and smells the flavor of hormone. She says that the man tricked her to save him with the flavor, but Kubri reminds her that males hormone is the forbidden medicine of Capetown planet.

Xiao Qi finds out that the men aren’t the man she looks for, and the man tells her that they’re him if she drinks the wine. Kubri reminds Xiao Qi that wine is ecstasy medicine, but she has drunk it. She excited to place Kubri on the table, but the man kills Kuri with the wine. She sees the man singing on the stage and thinks he is the one she saved. But he gets a call from Bao Wang, and is startled to go to the restroom to pick up his phone.

He lies that he is drawing in the painting room, but Bao Wang hears the music. He is surprised to see the man Han Brother who was talking with him over the phone. Han Brother is also the secretary of Fang Leng. Xiao Qi looks for the man, but she is stopped by the lady, who asks her to pay the bill. But Xiao Qi says that she doesn’t have money and passes out on Lady.

The next day, Xiao Qi falls asleep with a wine bottle. Lady mistakes Xiao Qi as illegitimate daughter of wealthy man, and prepares breakfast for her. She introduces herself as the owner of the club, and We know that her name is Chai Sister. Chai Sister reminds Xiao Qi that she took part in the party and she kept her because she worried that she might meet the danger. Xiao Qi thanks Ms. Chai and calls her earth people. Ms. Chai thinks Xiao Qi is rich but is told that she doesn’t have parents.

Ms. Chai asks Xiao Qi to deliver foods, and tells her that she won’t get her to starve. Xiao Qi is excited to hug Ms. Chai and thinks earth people are nice. But Ms. Chai rejects Xiao Qi’s sugar cannonball. Mr. Han drives Fang Leng and thinks their visiting will intermingle Little Lie’s thinking. But Fang Leng doesn’t want Little Lie to lazy as the exhibition is going to begin. He asks him if he locked Little Lie well, and Mr. Han is confident and says that there will be no fly flying out.

Fang Leng sees Xiao Qi disappearing, and asks Mr. Han if he saw the girl. But Mr. Han denies it. Xiao Qi arrives at the room, but gets blocked by the bodyguard. She is surprised to see Little Lie, and he takes her in and makes sure if she got injured. She thinks he is more handsome than she saw in the evening, and he realizes that she saw his performing. We know that his name is Fang Lie, and he asks her to take off her clothes.

Fang Lie explains that he needs to change clothes with Xiao Qi to get out, and she asks him if he is a jerk. He says that the evil businessman locked him up and asked him to draw, and thinks art is the thriving of afflatus. Fang Lie wants to wear Xiao Qi’s clothes, and asks her to stay in the painting room. He comforts her that the evil businessman won’t trouble her. Xiao Qi agrees with it, and Fang Lie pretends to lace up when Fang Leng and Mr. Han show up.

Fang Leng takes off Fang Lie’s cap and finds the person isn’t Fang Leng but Xiao Qi. He thinks they met before, but she tells him not to pretend to be her friend. So he asks her where Fang Lie is. She doesn’t want to him and threatens to use super power. Xiao Qi is surprised that the super power doesn’t work for Fang Leng, and flees away when Mr. Han shows up. Fang Leng tells Mr. Han not to chase Xiao Qi and picks up the note with Xiao Qi’s address. Xiao Qi returns and is surprised to see her work clothes, and Fang Lie left a business car and asked her to date at the restaurant.

Ms. Chai asks Xiao Qi why she flirted with customer since she just worked. But she claims that she wanted the employee who can get along with customer. Xiao Qi wants to deliver more foods, and Ms. Chai thinks Xiao Qi is a gem. Xiao Qi returns and calls Ms. Chai. Fang Leng tells her not to call, and asks her to only serve him as he rented the whole restaurant. Xiao Qi wants to flee, but Ms. Chai tells Xiao Qi not to reject Fang Leng as he is a big gold owner. Xiao Qi thinks she is off the duty, but Ms. Chai tells Xiao Qi to work overtime and thinks she should consider for the shop.

Fang Leng asks Xiao Qi to cook for him but she makes the kitchen be on fire by mistake. Fang Leng takes off his clothes and extinguish the blaze. Xiao Qi touches his chest and realizes that he is the person she looks for. He doesn’t know what she means and approaches her. She tells him not to be close to her, but she leans her head on his chest.