This is the Recap & Ending for My Girlfriend is an Alien Season 2: Episode 1. The wedding is going to begin. Feng Leng waits for Cai Xiaoqi. Cai Xiaoqi holds the flowers to walk to Fang Leng. She smiles to introduce herself. She tells us how she fell in love with Fang Leng in season 1.

How Does Chai Xiaoqi Lose her Memories? 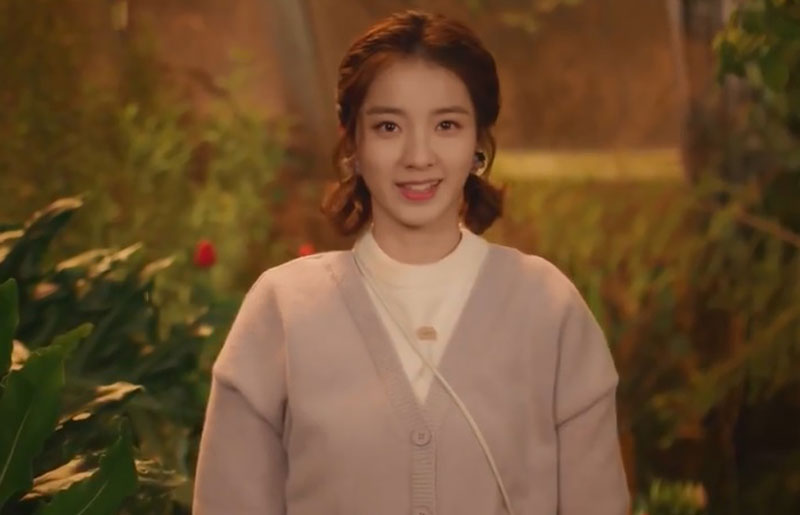 Note: From here on out there are specific plot spoilers for My Girlfriend is an Alien Season 2: Episode 1.

Fang Leng admits it. It makes Chai Xiaoqi happy. The guests applaud and cheer. MC asks Chai Xiaoqi the same question. She gives him the same answer just like Fang Leng. Fang Leng tries to hand over the ring to Chai Xiaoqi. She’s surprised when she sees the ring.

Fang Leng reminds Chai Xiaoqi that the sapphire on the ring was left by her when she saved him for the first time. He reveals he treated it as their love stuff. He adds that he intended to turn it into heart shape. He wishes the sapphire can replace him to guard her when she wears it. They exchange the rings. He kisses her. But she’s taken away.

Chai Xiaoqi and Xiao Bu are locked up in the cell. Xiao Bu wakes Chai Xiaoqi up. Chai Xiaoqi tells Xiao Bu that she’s going to store the memories of her and Fang Leng because she’s not sure what the organization will do to her. She stores the memories into the sapphire.

The alien tells Chief to exile Chai Xiaoqi. Another alien agrees to it. He wants to let the aliens know the consequence of betraying planet. But Jiang Shiyi tells Chief to send Chai Xiaoqi to steal the hormones from Fang Leng.

Jiang Shiyi deletes Chai Xiaoqi’s memories. He tells her that Fang Leng is her enemy even if he’s her husband. Xiao Bu wakes up. She finds out that she turned into a human. She’s very happy. Chai Xiaoqi tells Xiao Bu to look into Fang Leng. Xiao Bu is surprised that Chai Xiaoqi chose the wedding dress.

Chai Xiaoqi tells Xiao Bu that they’re going to give Fang Leng a lesson. Xiao Bu tells Chai Xiaoqi to be careful because they were fooled by Fang Leng. Chai Xiaoqi reveals the organization gave her a secret weapon. A meteorite hits the spaceship. Chai Xiaoqi and Xiao Bu fall into the time tunnel. They part.

Chai Xiaoqi yells when she falls from the sky. She slows herself down. But she’s hung on the tower. Fang Leng sees her. He runs to her and catches her when she falls. They fall to the cushion together. Chai Xiaoqi gets up. She takes a look at Fang Leng. The sapphire gathers the love bubbles.

Fang Leng walks to the stage. The girls cheer because they think he’s very handsome. Fang Leng tells the reporter that he’s single. Chai Xiaoqi walks to Fang Leng. She takes over the microphone from him. She introduces herself as his wife. She tells the fans that Fang Leng is married.

Madam Fang thinks Fang Lie is very outstanding. She believes that he will be useful if he joins the company. Fang Lie shakes hands with Mike. He walks away. Mike is confused because he doesn’t know Fang Lie at all. The cop walks to Xiao Bu and wakes her up. She runs away because she cannot prove that she’s a human.

Fang Lie texts Fang Leng. He asks him to keep him. Fang Leng rejects it. Fang Lie sees the cops running to him. He mistakes that they came to arrest him. He takes his bag to run. He learns that the one cops chase is Xiao Bu. He takes her to hide.

Xiao Bu is close to Fang Lie. She’s affected by the hormones. She turns into a tortoise. Fang Lie goes to check if the cops left. She finds out that Xiao Bu is missing. He sees the tortoise. He picks her up and hits her head. It makes her dizzy.

Chai Xiaoqi sneaks into Fang Leng’s house. She finds out that the house looks like the place the single man lives. She remembers Han Zhiming told her to work hard if she want to be Fang Leng’s wife. She thinks Fang Leng pretended not to know her because he wants to break up with her.

Fang Leng turns on the curtain. Chai Xiaoqi places the photo on the table. She hides in the wardrobe. She peeks at him when he takes off his suits. But she makes a sound. She walks out of the wardrobe and gets into the bathroom. She sees his pectoral muscles when he takes a shower.

Chai Xiaoqi is excited. But she realizes that she has a task. Fang Leng walks out of the bathroom when Chai Xiaoqi is looking for something in the bedroom. She hides behind the curtain again. He turns off the light and lies in the bed. She decides to take action until he falls asleep. Chai Xiaoqi smiles to close the window after she found out that Fang Leng had fallen asleep. She tries to look for something from his body. But he hugs her and makes her sleep with him.

Fang Leng wakes up. He finds out that Chai Xiaoqi is grabbing his pectoral muscles. He pushes her off the bed. She greets him. He asks her how she got into his house. She blames him for throwing away her stuff. She asks him for the hormone element.

Fang Leng tells Chai Xiaoqi that he’s going to call the police. She throws his phone away and runs out of his house. He calls Han Zhiming and asks him to look into him and Chai Xiaoqi’s relationship. He sees the photo which was ruined by Chai Xiaoqi.

Fang Leng arrives at the company. The employees greet him. Fang Leng gets into the secret room with Han Zhiming. Han Zhiming finds out that Chai Xiaoqi isn’t in Fang Leng’s memory bank. He thinks the girl isn’t Fang Leng’s girlfriend.

Ms. Chai brings the milk tea to Chai Xiaoqi. Chai Xiaoqi stops the time and puts Xiao Bu on the ice cubes. Xiao Bu turns into a human. Ms. Chai is surprised to see Xiao Bu. She walks away. Chai Xiaoqi tells Xiao Bu to send the signal to their planet.

But Xiao Bu’s signaler is broken. Chai Xiaoqi cries with Xiao Bu after she realized that they have to be homeless before their home planet finds them. Chai Xiaoqi complains that the ring she wears is useless. But Xiao Bu senses the hormones from the sapphire.

Xiao Bu tells Chai Xiaoqi that the sapphire will send the signal to home planet once it gathers enough hormones. It makes Chai Xiaoqi happy. She sees the guys getting into the cafe. She decides to go to gather their hormones. But she cannot get the hormones from them when she’s close to them. So she dances for them.

Ms. Chai asks Chai Xiaoqi if she’s the spy the cafe sent. She tells her that she can pay her more than the owner of the cafe. Chai Xiaoqi tells Ms. Chai that she’s not a spy. She tries to walk away with Xiao Bu. Ms. Chai stops them. She asks them to pay the bill.

My Girlfriend is an Alien Season 2: Episode 1 Ending

Episode 1 of My Girlfriend is an Alien Season 2 ends with Chai Xiaoqi handing over the two crystals to Ms. Chai. Ms. Chai thinks Chai Xiaoqi fooled her with the glass balls. She takes Chai Xiaoqi and Xiao Bu to wash dishes. Chai Xiaoqi complains that the crystals she gave Ms. Chai are very expensive.

Chai Xiaoqi wonders why she couldn’t gather the hormones. Xiao Bu tells Chai Xiaoqi to think about how he gathered hormones from Fang Leng. Chai Xiaoqi realizes that she can only gather hormones for Fang Leng alone. She disappears with Xiao Bu when Ms. Chai breaks into the kitchen. Ms. Chai passes out.

Chai Xiaoqi shows up at the parking lot with Xiao Bu. She tells her to find a place to take a break because Xiao Bu feels hot. Chai Xiaoqi looks for Fang Leng. She finds him and blocks his way. She dances in front of him. He tells her that she cannot attract him with the dance. He walks away. Chai Xiaoqi wonders why she cannot collect hormones. She notes that the car is going to hit Fang Leng. She runs to drag him aside. He trips and hugs her. The sapphire collects hormones when Fang Leng is in Chai Xiaoqi’s arms.