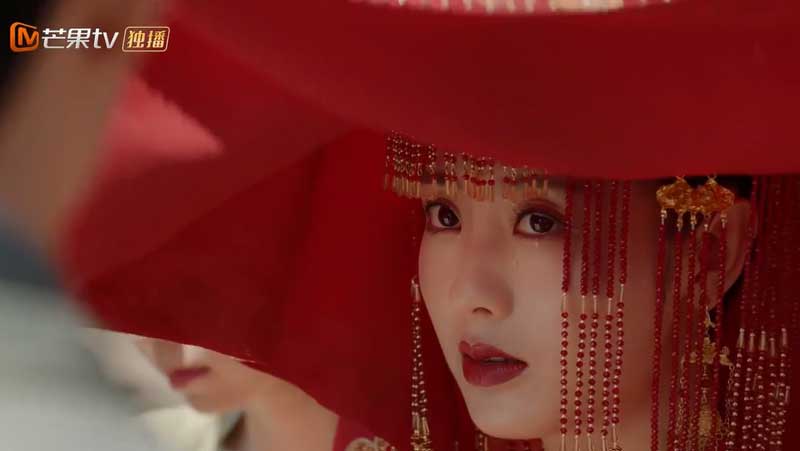 Note: From here on out there are specific plot spoilers for Lost Track of Time: Episode 2.

Lu Anran thinks it’s impossible that Mu Ze only has her since he chose the path. She adds that it will be enough that Mu Ze loves her. Lu Xinran smiles. Lu Yun takes Lu Anran’s son Mu Yu to show up. Lu Anran lets Mu Yu have a seat. She tells him that she prepared the food he likes.

Xiao Jingque shows up. She brings the parrot to Lu Anran. She wishes her to accept it. Lu Anran lets Ling Xi take over the parrot from Xiao Jingque. Mu Yu is close to parrot because he thinks she’s very beautiful. Ling Xi tells Mu Yu to teach the parrot to speak.

Parrot says something and hints that Lu family will be poor. Lu Yun is furious to stand up. He thinks Xiao Jingque taught Parrot to say so. She laughs and thinks she cannot control the animal to speak. Lu Xinran thinks Parrot learned the bad intention from Xiao Jingque. She tells Lu Anran to punish Xiao Jingque.

Xiao Jingque explains that she came to wish Lu Anran a happy birthday. She thinks people will badmouth Lu Anran if it gets spread. Lu Anran tells Ling Xi to take Mu Yu away. Xiao Jingque mentions what Mu Ze said that Lu Anran is a good person.

Lu Anran mentions the bracelet and hairpin Xiao Jingque wears. She lets Lu Yun force Xiao Jingque to get on knees. Xiao Jingque yells at Lu Anran. She asks her if she fears the punishment of Mu Ze. Lu Anran tells Xiao Jingque that she will take her life if she gets Mu Ze involved.

Lu Anran tells Xiao Jingque to return the presents to the ladies. She asks her to think about her mistake after she completes the task. Xiao Jingque walks away. Lu Xinran thinks Lu Anran gave Xiao Jingque a light punishment. She thinks Xiao Jingque would bring a big trouble if Lu Anran didn’t discover it.

Lu Anran thinks Xiao Jingque forgot herself after she had flattered. She thinks she shouldn’t do it too much because Xiao Ying is very useful to Mu Ze. Lu Yun tells Lu Anran that she wants to join the battle of Bai Lin. Lu Xinran is against it. She reminds Lu Yun that he’s the only man of Lu family. She tells him to think about it for his parents.

Lu Yun points out that everyone has parents. He confesses that she doesn’t want to wear the title “Princess’s Younger Brother” to catch river bandits all his life. He thinks he should make credits as a man. He adds that he wants to help his two brother-in-laws.

Lu Anran waters the grapevine. She tells Mu Yu that they’re going to eat grapes once it grows up. Mu Ze calls Mu Yu. Mu Yu runs to Mu Ze and blames him for his late. He tells him that he and Lu Anran has waited for him. Mu Ze carries Mu Yu. He apologizes to him and asks him to explains it to Lu Anran.

Lu Anran tells Mu Ze not to listen to Mu Yu’s nonsense. She reveals Mu Yu dragged out when she was seeing the map of ship. Mu Ze asks Lu Anran if the ship is the one which can fight. She admits it. He thinks she always cares for him. It makes her smile.

Mu Ze tells Lu Anran to take a break because it’s her birthday. She’s surprised that he remembered her birthday. He hands over the box to her. She opens the box and sees the flower. She thinks the flower is very beautiful. He catches the chance to hug her.

The maid helps Xiao Jingque walk. She thinks Mu Ze will be happy since Xiao Jingque is pregnant. Xiao Jingque complains that the child is concubine’s son even if Mu Ze likes the child. She is tripped by the string. Mu Yu invites Xiao Jingque to play kite with him.

Xiao Jingque lets Mu Yu reach his hand. She slaps his hand when she scolds him. It makes him cry. The maid shows up. She explains to Xiao Jingque that Mu Yu didn’t intend to do that. Mu Yu pushes Xiao Jingque. He tells her that he’s going to tell Mu Ze that she bullied him. He adds that he will bully his sisters and brothers.

The maid gets on knees to Xiao Jingque. She tells her not to put what Mu Yu said into her mind. She takes Mu Yu away. Lu Anran returns home. She sees the maids getting on knees to her. She runs into the room and sees Mu Yu lying in the bed.

Lu Anran asks the maids why they wore the death clothes for Mu Yu. The maid Yun Niang cries to tell Lu Anran that Mu Yu fell into water when she went to take fishing rod. She wants to die to repay it. Lu Anran yells at Yun Niang and asks her why Mu Yu went to the place.

Yun Niang explains to Lu Anran that she took Mu Yu to the pool because he offended Xiao Jingque. Lu Anran hugs Mu Yu when she tears up. She asks him to wake up. The maid leaks that Xiao Jingque left from the rockery when Mu Yu passed away. She adds that Xiao Jingque was flustered and she was almost tripped by the stone.

Lu Anran tells Lu Xinran to swear with her future children. Lu Xinran swears it. She tells Lu Anran that Mu Ze found out that Mu Yu passed away because Yun Niang didn’t manage him well. She thinks Chun Er told a lie because she’s a good friend of Yun Niang. She reveals Mu Ze killed the two maids.

Lu Anran tears up. She thinks her son cannot come back. Xiao Jingque hands over the soup to Mu Ze. She tells him that her brother burned the enemy’s barrack. He thinks he’s easy in her brother’s help when he takes over the soup. But he pours the soup on her hand.

Mu Ze tells Xiao Jingque that he doesn’t care for losing how many children. He adds that it doesn’t mean she can do anything she wants. She cries to admit her mistake. He thinks she should repay something after she made the mistake. He asks her what price Xiao family is going to pay.

Mu Ze mentions Xiao family raised many soldiers. Xiao Jingque explains that her brother raised the soldiers for Mu Ze. She promises to give the soldiers to Mu Ze. He agrees to it. He tells her to take a break in her room since her hand was hurt. He tells her not to trouble Lu Anran. He reminds her that he cannot catch Lu Anran’s next blade.

Lu Anran puts the lotus lamp on the water to commemorate her son. Mu Ze joins her. He sees the paper crane in her hands. He tells her that their son’s death was an accident. She wonders why he’s so calm since the one who passed away is his real son. Lu Anran tells Mu Ze that she’s not sure if he actually loved Mu Yu and her. She’s sad to walk away.

Shan Yue reports to Lu Anran that their ships launched. Ling Xi applauds. She thinks Mu Ze will be happy. She adds that Lu Anran doesn’t have the reason to stay in the shipyard. She wonders why Lu Anran hates Mu Ze since Mu Ze found the truth. She thinks Mu Ze is going to be robbed by Xiao Jingque.

Mu Chuan visits Mu Ze and congratulates him on his son. Mu Ze tells Mu Chuan to live for some days since he came. Ling Xi walks out of the room. She pours the water and complains that Xiao Jingque worried that people don’t know she gave birth to a son.

Ling Xi tells Lu Anran to go to suppress Xiao Jingque. She worries that people will think Xiao Jingque is the princess. Lu Anran rejects it. Ling Xi reminds Lu Anran that nobody is going to remember Mu Yu. She feels sorry for mentioning the sad past.

Episode 2 of Lost Track of Time ends with Mu Ze asking Empress a favor. He mentions she has treated him well after his real mom passed away. She tells him that she knows he wants to be the crown prince. She tears up and promises to persuade Emperor. Mu Ze reminds Empress that Mu Lin has power at court. He thinks Mu Lin will be crown prince again if Consort tells Emperor that Mu Lin is a good prince. Empress asks Mu Ze what does he want her to do?