This is the Recap & Ending for Reborn Rich K-Drama: Episode 1. Hyun-Woo carries the money to walk out of the bank. He looks at the sky. He smiles. It flashes back. The reporters try to interview Yoon-Ki. Hyun-Woo blocks the reporters. 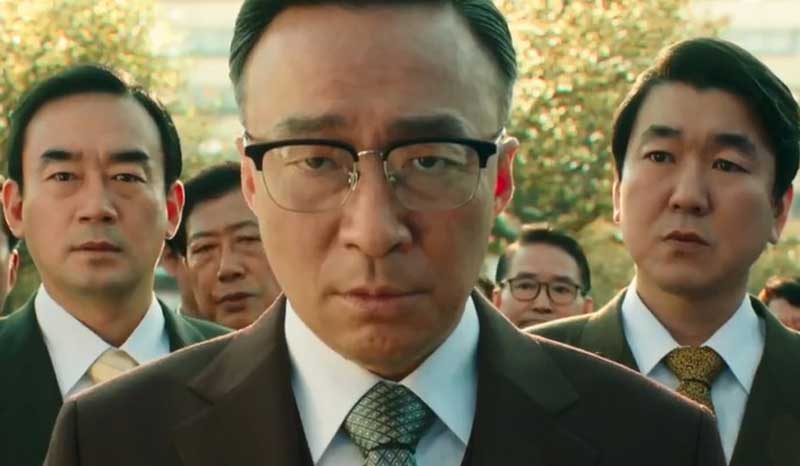 Note: From here on out there are specific plot spoilers for Reborn Rich K-Drama: Episode 1.

Min-Young places Yoon-Ki’s photo on the board. She thinks he looks handsome. She praises the police. The follower joins her. He asks her how she will deal with Yoon-Ki. She reveals she’s going to make Yoon-Ki imprisoned. Gyeong-Min places the drinks on the table.

Hyun-Woo takes a look at the drinks. He tells Gyeong-Min to replace the drinks because the chairman is allergic to peaches. He tells him that he’s the team leader of his team. Gyeong-Min feels honored to know Hyun-Woo. Yoon-Ki arrives at the building. He gets off the car and walks in his wife’s help.

Yoon-Ki reminds Sung-Joon that everything he has was given by him. He thinks he cannot live with his help. He tells him that he did it for helping him. Sung-Joon points out that Yoon-Ki’s choice made him believe that he cannot be the chief of Soonyang. He tries to walk away.

Yoon-Ki tries to stop Sung-Joon. But he feels uncomfortable. Hyun-Woo walks into the office. He sees Yoon-Ki lying on the floor. He runs to him. Sung-Joon catches the chance to run away. Chang-Je has a fight with Hwa-Young in the elevator. He asks her to support. But she rejects it.

The door of the elevator opens. Chang-Je runs into Director Kim. He walks to him and shakes hands with him. Hwa-Young asks Director Kim what happened. He takes the couple to the meeting room where some of people are waiting for them.

Director Kim tells the people that Yoon-Ki is treated by the doctor. He needs someone to announce it. Dong-Ki volunteers to announce it. Ye-Joon is against it. She thinks Sung-Joon is the best candidate. Hyun-Min summons Hyun-Woo to her office.

Hyun-Min tells Hyun-Woo that Sung-Joon needs to show up because of the speech. She asks him to go to look for Sung-Joon. He reminds him that he will be fired if he fails to find Sung-Joon. Hyun-Woo drives the car away. He tells Gyeong-Min that he never makes decision himself.

Sung-Joon cries when he looks at the fish. He tells the waiter to be silent. But the waiter keeps tangling Sung-Joon. Sung-Jong is furious to break the fish tank with the club. The waiter is scared to sit on the floor. Ye-Joon tells Ji-Na that she let Sung-Joon give the speech because she knew he won’t show up. Hyun-Min hears what Ye-Joon said.

Hyun-Woo breaks into the room. He’s hurt by Sung-Joon. Hyun-Woo tells Sung-Joon that he needs to go to give a speech. He promises not to tell people about what he saw in Yoon-Ki’s office. Sung-Joon pours the tea to Hyun-Woo’s head. He walks away.

Sung-Joon gives a speech that he will make Soonyang to be liked by the people. But what he says makes his wife Hyun-Min unhappy. Hyun-Woo gets changed. He hears the team members badmouth him. He gets a call from Jung-Rae. He goes to her house to fix the toilet. She gives the cash to him.

Hyun-Woo returns home. He pays his respect to his mom. Hyun-Woo’s father bring the ribs to him. Hyun-Woo points out that the ribs burned. Hyun-Woo’s brother hands over the pen to him. He reveals he’s working. He tells him that he wants to support the family as well.

Hyun-Woo’s father tells him to have a family. But Hyun-Woo throws a fit to his father. He leaves home. Hyun-Woo walks into the office. He finds out that the prosecutors are searching the office. He asks Min-Young for the warrant. She gives the warrant to him. He thinks they just perform their duties. She walks away.

The followers report to Min-Young that the evidence they found are useless. He believes that Hyun-Woo had prepared it before they came. Director Kim worries that Min-Young will come to the company again. Hyun-Woo comforts Sung-Joon that he will make Min-Young not find the evidence.

Hyun-Woo walks out of Sung-Joon’s office. He’s praised by Yoon-Ki. He gets off the elevator. He runs into Hae-In. He tells Gyeong-Min that Hae-In is Yoon-Ki’s wife. He reveals they have a son. The doctor tells the people of Soonyang that Yoon-Ki is fine.

Dong-Ki tries to go to see Yoon-Ki. But the doctor stops Dong-Ki. Hwa-Young tries to stop the doctor. But Hae-In shows up. Hwa-Young believes that Hae-In is good at scaring people. Hae-In talks back that Hwa-Young feared her because she did something bad.

Hae-In asks the people if they don’t welcome her like they did before. She tells them that she will give them her shares. She asks them to tell her the truth. Gyeong-Min hands over the papers to Hyun-Woo. He asks him to take a look at the papers.

Hyun-Woo runs into Sung-Joon. Sung-Joon praises Hyun-Woo for what he did for him. Hyun-Woo walks out of the building. But he stops and goes to see Sung-Joon. He reports to him that Soonyang will be affected if the prosecutors find the paper company.

Hyun-Woo is kidnapped to the cliff. He’s surprised to see Gyeong-Min. Gyeong-Min mentions Hyun-Woo told him to listen to the order of his leader. Hyun-Woo is furious to grab Gyeong-Min’s collar. He asks him who ordered him to do so. Gyeong-Min takes a look at Hyun-Woo’s bag. He tells him that it was the one who wanted to get the money. He walks away. Hyun-Woo is killed. He falls into the sea.

Hyun-Woo wakes up in the car. He sees Hae-In and Yoon-Ki. He looks at himself in the window. He sees a strange face. He wonders what happened. He gets off the car to vomit. Hae-In joins him. She takes care of him. She takes him to see Pil-Ok. Yang-Cheol arrives. The people greet Yang-Cheol. Hyun-Woo blocks Yang-Cheol’s way. He’s shocked when he sees him.