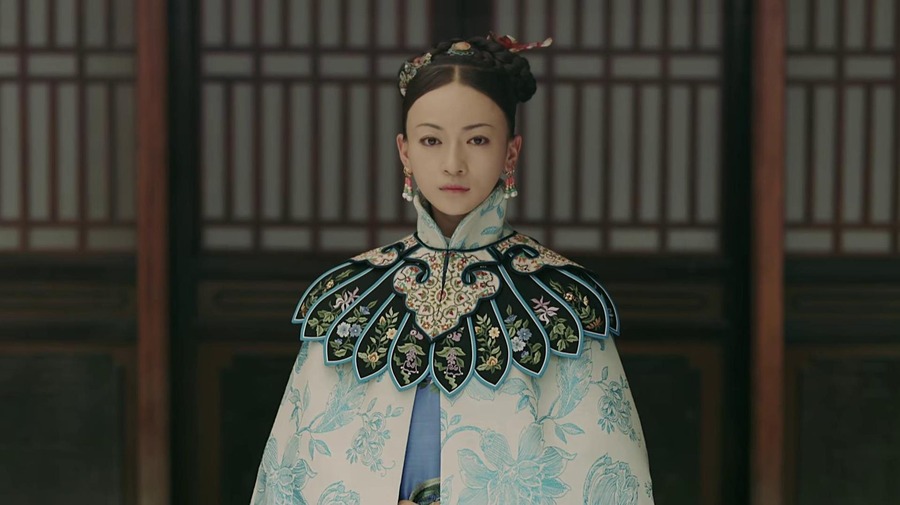 Wei Yingluo is chose to enter palace with other girls. The girl Ji Xiang wets Wuya Qindai’s skirt by mistake, Wuya Qindai wants to tread Ji Xiang’s hand. But Wei Yingluo stops her, and thinks her mood shouldn’t be influenced by blood. Wuya Qindai mentions she is unhappy because her shoes are dirty by Ji Xiang. So Wei Yingluo puts rose pollens in her shoes, and wishes her to be promoted. Wuya Qindai forgives Ji Xiang.

The senior concubine doesn’t respect Fu Cha, but Fu Cha doesn’t care. She hates her most when emperor only cares Fu Cha. Wuya Qindai is proud when emperor asks her about the shoes. But he gets angry, and asks his followers to kill her and her family.

Jin Xiu mocks at Ji Xiang because she hurts her hand while embroidery, Wei Yingluo gives her embroidery to Ji Xiang. But she is reported to help Ji Xiang to cheat. Steward Wu fires the informant, and keeps them at the embroidery workshop.

Chief Maid takes the maids to walk into the forbidden city, and tells them not to talk a look. The lady flatters Wu Ya and thinks her hairpin is very beautiful. Ji Xiang stares at the ladies and wonders who they’re. Ling Long tells Ji Xiang that they’re ladies who passed the first exam.

Ji Xiang thinks the clothes of the ladies are good looking, and hopes her to wear the clothes. Jin Xiu tells Ji Xiang that they’re nobles, and thinks they can only be maids. She bumps her. The bucket turns over, and it pours water on Wu Ya.

Lu Wanwan thinks Ji Xiang didn’t intend to do that, and tells Wu Ya to forgive Ji Xiang. But Wu Ya tells Lu Wanwan that she didn’t ask her about it. Aunt Fang tells Wu Ya that she can scold the maids as they’re stupid, and thinks she shouldn’t get angry to hurt herself. Wu Ya tells Ji Xiang to repay with her hand since she ruined her clothes.

Wu Ya steps on Ji Xiang’s hands. Ji Xiang says that it’s hurt. Ying Luo runs to Wu Ya and takes her hands away from Ji Xiang. Wu Ya thinks a little maid shouldn’t ask for her mercy. Ying Luo reminds Wu Ya that she shouldn’t be stained by blood as she is going to take part in the court selection. She adds that it will damage her luck.

Wu Ya thinks Wei Yingluo is good at talking, but she says that she’s not happy because her shoes are dirty. Wei Yingluo praises Wu Ya for embroidering a lotus under the shoes. But she points out that it lacks one thing, and wants to share the burden for her.

Wu Jia smiles, and Wei Yingluo tells her to take for a talk. Wu Ya does so. The lady thinks it’s wonderful when the lotus is on the ground. Wei Yingluo mentions the beauty in the book gets the emperor’s favor because her feet make lotus. She wishes Wu Ya to get high rank.

Wu Ya is happy to forgive Ji Xiang after seeing the flattering dog looks of Wei Yingluo. She walks away. Wei Yingluo helps Ji Xiang get up and binds up her hand. Ling Long thinks Ji Xiang is too stupid and blames her for almost hurting them.

But Ji Xiang points out that she wouldn’t make mistake if it wasn’t because Ling Long. She shows her hand to her. Chief Maid stops the two and tells the maids to leave. Ji Xiang asks Wei Yingluo why she wanted to help Wu Ya since she’s so evil. Wei Yingluo says that she’s not sure if it’s a good thing for bad thing.

Er Qing walks to Empress and tells her to prepare it early because the palace pick is coming. But Empress tells Er Qing and Ming Yue that she has nothing to prepare since it’s ladies fighting. She prefers to play flowers there. Ming Yue thinks Empress gives the one in the Chuxiu Palace changes if she doesn’t attend.

Er Qing stops Ming Yu but reminds Empress that the palace pick is a huge thing. She thinks she should go to take a look. She says that Queen will blame her for not caring for the palace business. Empress thinks the two are nagging, and agrees to attend it. Ming Yu feels happy and wants to dress up for Empress.

Consort Gao sits on the sedan chair and is carried by the servants. She visits Empress in the maid’s help and greets her. She mentions the girls are good looking. But Empress wants to pick the girls who come from famous families and are with best conduct to serve Emperor. She adds that it’s not related to looks.

Consort Gao thinks they shouldn’t pick some ugly girls as Emperor will be upset after seeing them. She says that it will affect the looks of princes. Empress points out that the girls aren’t better than Consort Gao even if they’re pretty. Emperor arrives. Empress greets him. He helps her get up. The servant Li Yu announces that the girls pick begins.

Emperor tells Li Yu to take off Wu Ya’s shoes and show it to him. Li Yu does so. Emperor tells his followers to take Wu Ya out. She explains that she just faked step making lotus for good luck, and asks Empress to save her. Empress thinks Wu Ya didn’t do anything wrong for the first place, and tells Emperor to just give the flower to Wu Ya.

Empress reminds Emperor that Wu Ya doesn’t have any face to see people if she’s driven out from the palace. Wu Ya says that she will shame her family if she’s driven out in such way. Emperor tells Wu Ya that he ordered girls not to bind up feet, and thinks there’re many girls binding up feet.

Emperor says that Wuya clan learned the bad action. He asks Wu Ya if she wants to learn from the demon consort Pan Yunu to ruin the palace. He thinks she will bring troubles if she gets in the palace. He says that he will punish her father. She tells him that the maid framed her before she’s taken away.

Jin Xiu pours water in Wei Yingluo’s bed because Steward Wu praised her. Wei Yingluo gives her a lesson, and claims she doesn’t come there to make friends. She warns Ji Xiang not to be kind, and learn to protect herself.

She lies in bed, and remembers the looks of her sister Wei Yingning lay in casket. She wants to find out the reason why her sister was dead.

Concubine Yu doesn’t want to sleep with emperor, and claims she is ill. The Senior Concubine suspects her, and sends a doctor to see her giving her loquat medicine.

Concubine Yu feels shamed because Yi Bing is slapped. Madam Zhang says that the status of concubine is lower than maid. Concubine Yu grumbles why she couldn’t detect the toxic of loquat, Wei Yingluo points out that the stone is poisonous. Concubine Yu wants to take her to see Fu Cha, but Madam Zhang refuses it.

Concubine Yu is mad because of Yi Bing’s death, and asks Wei Yingluo to tell the truth. But Madam Zhang tells her she will be death if the imperial concubine knows it. Wei Yingluo reminds her sister, and thinks Yi Bing should fight with them.

She gets angery, and hits the tree Ling Bai. The emperor passes by, and gives her the punishment, but she explains that she knows nothing about Ling Bai.