This is the Ending Explained for Who Rules The World Chinese Drama Episode 40. Han Pu gets shot for protecting Feng Xiyun. Feng Lanxi kills the archers when Feng Xiyun rushes to Han Pu. Dong Shufang takes his troops to retreat. Han Pu tells Feng Xiyun that he wanted to catch a chance to repay her. He thinks it was the chance. 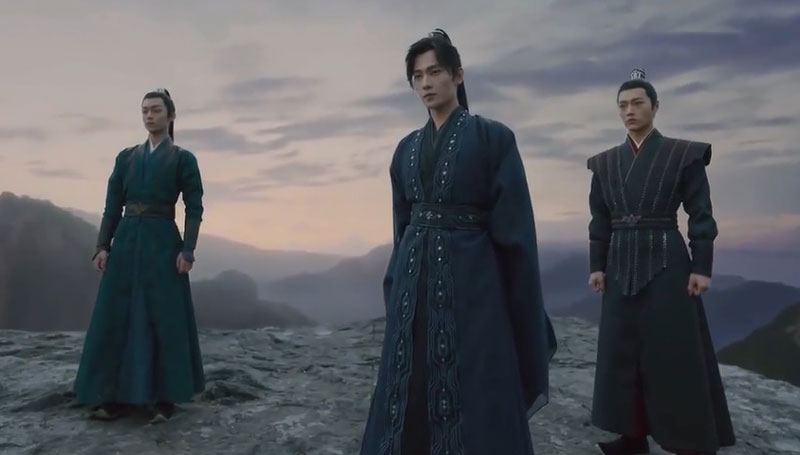 Note: From here on out there are specific plot spoilers for Who Rules The World Chinese Drama Episode 40.

Han Pu asks Feng Lanxi to take care of his sister for him when Feng Xiyun cries. He wishes to be Feng Xiyun’s brother in his next life. He passes away in her arms. She hugs him and tears up when she remembers their past. She buries him.

Feng Lanxi tells Feng Xiyun not to be sad. He thinks Han Pu doesn’t wish her to be like that. She reveals Han Pu wished to be a doctor. She doesn’t expect that he became a hero. She wants to achieve the dream for him. Feng Lanxi hugs Feng Xiyun to comfort her. Feng Xiyun tells the generals to retreat when they think they cannot win.

But the generals want to fight for Feng Xiyun until they pass away. She changes the mountain’s name Falling Hero Mountain into Hero Mountain because there’re man heroes passed away in the mountain. The follower reports to Feng Lanxi that Dong Shufang’s army is close to them. Feng Lanxi lifts his sword. He tells the soldiers to fight with the enemies.

Feng Xiyun flies to Dong Shufang. She attacks him and makes him fall off the horse. She points her sword at him. She asks him if the army was created by Yu Wuyuan. He admits it. She tells him that she wants to have a fight with him. He laughs to accept her challenge.

Feng Xiyun stabs Dong Shufang and makes him get on knees to her. He laughs to tell her that Yu Wuyuan prepared the cannons for her. He believes that she will die with him. She cuts his neck to kill him. The divinity army open fire to attack Yong Army. Feng Xiyun flies to stop the cannons. The cannons get ruined. But Feng Xiyun was hurt. Feng Lanxi flies to catch the falling Feng Xiyun.

Huang Chao reaches Empire City with his army. But Yu Wuyuan kidnaps the citizens. Huang Chao sees the guy on the city wall. He remembers he was the one who stayed with Yu Wuyuan. Huang Chao asks for seeing Yu Wuyuan. But the guy tells him that he will kill the citizens if he attacks the city.

Huang Chao realizes that what Yu Wuyuan wants is the world. He decides to retreat. Feng Lanxi cries to hug Feng Xiyun in the carriage. He tells her not to leave him. He comforts her that the old man Tian Ji will save her. Tian Ji reminds Feng Lanxi that he can only live for ten years if he uses his life to save Feng Xiyun.

Feng Lanxi tells Tian Ji that he cannot live without Feng Xiyun. He thinks it’s enough to let him accompany Feng Xiyun for ten years. He tears up. Feng Xiyun wakes up. She goes to look for Feng Lanxi. She finds out that his hair is white.

Feng Lanxi smiles to ask Feng Xiyun if she doesn’t like him anymore when his hair is white. She runs into his arms. He catches the chance to hug her. She cries to ask him why he was so silly. He leaks that he would break the promise if Tian Ji didn’t help him. He wipes off her tears.

Bai Fengxi asks Feng Lanxi how many lifetimes he used. He reveals he has ten years to accompany her to enjoy the snow. She’s moved to touch his face. He tells her that he will live in the nightmare forever if she doesn’t live in the world. He grabs her hand. He asks her if she will blame him for leaving in advance.

Feng Xiyun thinks Yu Wuyuan shouldn’t hurt people even if he has many complaints. Feng Lanxi thinks he should stop Yu Wuyuan for the people who almost lose their lovers like him. Feng Xiyun decides to go to Empire City with Feng Lanxi.

Feng Lanxi, Feng Xiyun and Huang Chao break into the palace. Yu Wuyuan is waiting for them. Yu Wuyuan doesn’t expect that Feng Lanxi is going to die like him. Feng Lanxi tells Yu Wuyuan that he doesn’t feel any pain because he willingly sacrificed for his lover. Feng Xiyun blames Yu Wuyuan for hurting the people in the world.

Yu Wuyuan complains that Emperor Weilie promised to share the world with his ancestor Yu Yantian. But he didn’t forgive the six years old kid of Yu family. He adds that the Yu family got ruined if the servant didn’t save the baby of Yu family.

Yu Wuyuan thinks the world hurt him. Bai Fengxi tells Yu Wuyuan what he did is like Emperor Weilie. But he thinks he didn’t do anything wrong. He tells Huang Chao that he’s just his piece. He reveals he killed Huang Yu. Huang Chao points his sword at Yu Wuyuan. He asks him why he did that.

Yu Wuyuan confesses to Feng Xiyun that he killed her master because Bai Jiande knew it too much. He tells her that she wouldn’t become queen if he didn’t kill her brother Feng Xieyue. She wants him to repay the life. Feng Xiyun kills Yu Wuyuan with Feng Lanxi after they used the Blue Eagle and Green Moon together.

Feng Lanxi, Feng Xiyun and Huang Chao go to see Jing Yan. They greet him. Jing Yan learns that Yu Wuyuan didn’t get what he wanted. Jing Yan hands over the scroll to Feng Lanxi because he thinks he’s very outstanding to be the next emperor. He walks away. Huang Chao takes a look at the scroll. He’s sad.

Who Rules The World stars Yang Yang and Zhao Lusi.