This is the Recap & Ending for Cheer Up K-Drama: Episode 9. Jung-Woo slaps Woon-Chan’s arm and wakes him up when he falls asleep. He tells him not to doze off. Woon-Chan complains that he dozed off because he had gotten up early. Jung-Woo tells the team members to welcome the star. 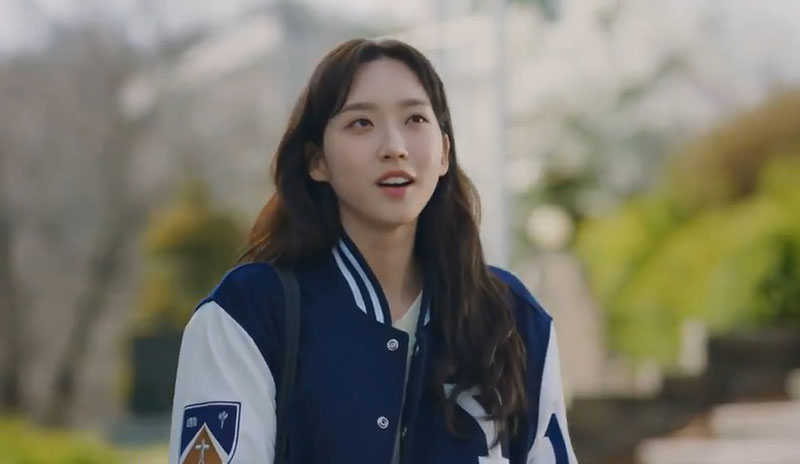 Note: From here on out there are specific plot spoilers for Cheer Up K-Drama: Episode 9.

Yong-Il wonders which star is going to come. Cho-Hee refuses to leak it even if Sun-Ja begs her. Jung-Woo gives the uniforms to Sun-Ho, Min-Jae and Sun-Ja. Sun-Ja is very happy after she got the uniform. Hae-Yi is unhappy because she has to wear the stage outfit. Cho-Hee comforts Yong-Il who’s unhappy as well.

Cho-Hee shows the photo of Sun-Ho and Hae-Yi to Jung-Woo. It indicates that the two are in love. Cho-Hee asks Jung-Woo how they will deal with the two. He tells her to focus on the festival. She agrees to his plan. She walks away. He remembers Hae-Yi hugged Sun-Ho.

Jin-Hee asks the maid if Sun-Ho didn’t come back last night when she’s cleaning the floor. The maid admits it and comforts Jin-Hee that Sun-Ho might sleep in his friend’s house. She finds the tickets Sun-Ho threw away. Yong-Il, Sun-Ja and Hae-Yi think they’re labors when they carry the boxes.

Cho-Hee walks to the three. She tells them to work if they have time to chat. Sun-Ja and Hae-Yi run away. Yong-Il stops Cho-Hee. He tells her that he wants to make her happy. So she tells him to work. Hae-Yi wonders if Sun-Ho is silent because of what happened yesterday. She tries to slap him. He avoids it and walks away.

Hae-Yi remembers Sun-Ho cried to ask her to look at him. Cho-Hee blocks Sun-Ho’s way. She shows the photo of him and Hae-Yi to him. She asks him if he and Hae-Yi are in love. He doesn’t reply her. He walks away. She tells Jung-Woo that she doesn’t wish the senior to date a freshman. He scolds her and walks away.

Hae-Yi wakes up and sees Jung-Woo. She waves the bread at him. She claims that she didn’t sleep. She tells him that she decided not to like him after knowing he doesn’t like her. She wishes him not to be embarrassed when he sees her.

Woon-Chan shows Ji-Yoon’s photo to So-Yoon. He asks her if her sister will come to their school. She admits it. He looks himself in the phone. He thinks his face looks bad. He intends to text Ji-Yoon. So-Yoon remembers what Ji-Yoon told her that she doesn’t like Woon-Chan. She sighs.

Jung-Woo’s mother comes to the dormitory with the side dishes. The guard tells the woman that Jung-Woo won’t come back because he’s the team leader of the cheering squad. The girl follows Ho-Min. She persuades him to focus on the festival. Yoo-Min runs into Ho-Min. She asks him if he’s the one who posted the footage.

Ho-Min tells Yoo-Min that the one who sent messages to him was the member of the cheering squad. She texts the person and asks for a meeting up. Sun-Ja wears Jung-Woo’s uniform to show up. She introduces herself as the team leader of cheering squad when she looks at herself in the mirror.

Hae-Yi reminds Sun-Ja that Jung-Woo will beat her if he finds out that she’s wearing his uniform. Sun-Ja claims that she will put the uniform back before Jung-Woo catches her. She asks Hae-Yi about her looks when she wears the uniform.

Yong-Il thinks Sun-Ja is wearing her father’s clothes. Min-Jae tells Sun-Ja to take off the uniform. She agrees to it and mistakes that he’s flirting with her. Hae-Yi tells Sun-Ja to do the action. She does it but she tears Jung-Woo’s uniform up by mistake.

Min-Jae intends to report it to Jung-Woo. Sun-Ja asks Min-Jae not to do that. He rejects it and tears up Jung-Woo’s uniform by mistake as well. Sun Ja tries to fix the uniform when Min-Jae is watching Cho-Hee and Jung-Woo. She tells Yong-Il that she’s good at fixing clothes.

But Sun-Ho tells Sun-Ja that the uniform costs 5,000 dollars. The team members get a message from someone who asks them to come to the waiting room. Hae-Yi throws a fit to Min-Jae because she mistakes that the message was sent by him. He’s confused.

Jung-Woo runs into his mom. She blames him for telling her a lie that he’s studying. He promises to study next year. But she doesn’t listen to his explanation. She’s furious to walk away when Cho-Hee calls him. Cho-Hee and Jung-Woo walk into the waiting room. Jung-Woo tells the team members that they’re not going to do the performance because the singer of the song was arrested.

Hae-Yi mentions they trained themselves very hard. Jung-Woo feels sorry. He thinks they don’t have any way to resolve the problem. He comforts them that they will have the chance at next festival. Min-Jae asks about their uniforms. Cho-Hee tells him that they’re going to wear the stage outfits.

Sun-Ja takes a look at the stage outfits. She notes that Min-Jae is crying. He denies it and complains that he has waited for the chance. She comforts him that they will do the new song. Yoo-Min takes Jung-Woo to get into the classroom. She shows the messages to him. She tells him that she got the messages like Hae-Yi before.

Yoo-Min tells Jung-Woo that someone texted her and asked her not to get together with Kyu-Jin when she had a date with Kyu-Jin. She reminds him that someone wants to hurt Hae-Yi. She tells him to go to find the person. Sun-Ja tells the team members that they’re going to prepare for the new song. But she tells Hae-Yi to ask Jae-Hyeok a favor.

Jin-Hee arrives at the school. The girls talk about Hae-Yi and Sun-Ho. Jin-Hee takes off her sunglasses. She asks the girl about Hae-Yi. Woon-Chan runs into the guy. The guy mentions Woon-Chan told him a lie that his father is a president. So-Yoon tells Woon-Chan that Jung-Woo is looking for him. She walks away with him. He tries to explain it. But she tells him not to put what the guy said into his mind.

Jung-Woo sees Yoo-Min off. He remembers she asked him to find the guy. He turns around and sees Ho-Min who holds a camera. Yoo-Min is waiting for the guy. Jung-Woo runs to her. He tells her that he worried about her. He thinks the guy didn’t come.

Jin-Il shows up. He hands over the paper to Yoo-Min. He tells her that it was given by someone. She takes a look at the paper. She learns that the guy wants to hurt Hae-Yi. Jung-Woo runs away. He runs into Yong-Il who tells him that Hae-Yi is in the waiting room.

Yoo-Min shows up. She tells Jung-Woo that Hae-Yi doesn’t pick up her phone. They go to look for Hae-Yi. Min-Jae doesn’t know how to dance. Sun-Ja teaches him when she grabs his hands. He has feelings for her. Jung-Woo breaks into the waiting room. He asks Sun-Ja about Hae-Yi. He runs away.

Jae-Hyeok is making the new song. He asks Hae-Yi if she has feelings for Jung-Woo. She denies it. He tells her that Jung-Woo won’t like her. The guy breaks into the music room. He tells Hae-Yi that Jae-Hyeok still likes her. He hands over the new song to her.

Jung-Woo runs into Hae-Yi. He blames her for not picking up her phone. He scolds her. He walks away and runs into Yoo-Min. He tells her that he plans to play with the guy. Cho-Hee shows the dancing footage to Jung-Woo. She reveals the rookies found a new song.

Episode 9 of Cheer Up K-Drama ends with Jung-Woo completing the show with Hae-Yi. Jung-Woo’s mother watches the performance. The team members praise each other. Sun-Ho and Hae-Yi have an eye contact. Cho-Hee asks about the uniform. Sun-Ja thinks the uniform was broken because Jung-Woo gained weight.