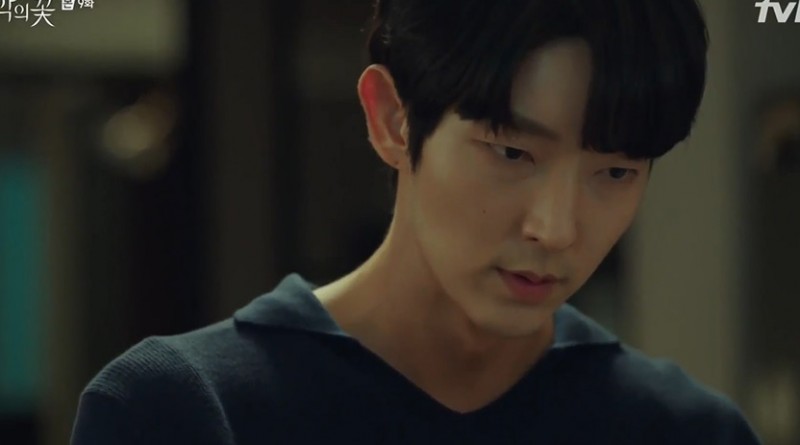 This is the Recap & Review for Korean drama Flower of Evil: Episode 9. Hyun-Soo takes Ji-Won to the light room, and tells her to shut her eyes. She walks in the room in his help, and finds out that the place is beautiful after she opened her eyes. 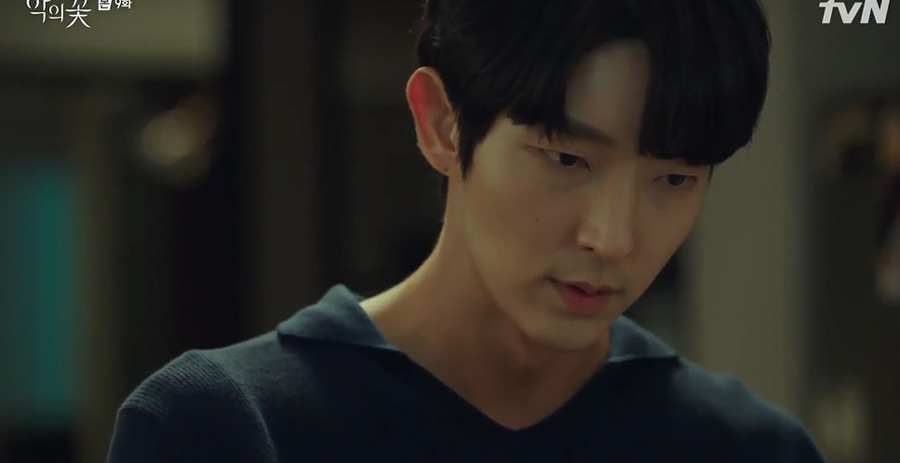 Note: From here on out there are specific plot spoilers for Flower of Evil: Episode 9.

Hyun-Soo says that it’s weird to think a living being is growing inside Ji-Won. She admits that she isn’t quite used to it herself as well. She tells him to say something to their baby. He gets on knees and clears his throat. It makes her laugh as she thinks he doesn’t have to do that.

Hyun-Soo thinks it’s the time for their baby to develop her hearing organs, so he wants to be careful. He holds Ji-Won’s belly, and tells the baby that they moved to a new house. He reveals that he hung yellow wallpapers in her room, and he hopes her to like it.

Ji-Won tells Hyun-Soo that the baby will like it. He gets up and tells her to eat with him as he made bossam. She finds out that the dish is the bossam with oysters. She asks him how he knew that she wanted to eat bossam, and thinks he read her mind. He tells her that it was about time they started craving it.

Ji-Won thinks she’s always the one who receives stuff from Hyun-Soo, and asks him if he wants something from her. He admits it.

Hyun-Soo walks to Ji-Won and asks her what brings her there. But she asks him why he is there instead. He explains that he was helping Moo-Jin with something. He adds that Moo-Jin wanted to know what kind of metal craftsman Min-Seok was.

Ji-Won asks Moo-Jin why he hid that he was with her husband. She thinks Hyun-Soo would’ve told her about it anyway. Hyun-Soo asks Moo-Jin if it was a secret meeting. Moo-Jin says that he doesn’t know why he tried to hide it. Ji-Won offers to go inside and talk with them.

Ji-Won walks in to room and sees Hae-Soo who turns around. Hae-Soo greets Ji-Won. But Ji-Won says that she doesn’t know Hae-Soo. Hae-Soo mentions Ji-Won visited her for Kyung Choon’s case. Ji-Won remembers Hae-Soo thought cops investigate based on imagination.

Ji-Won recognizes Hae-Soo and thinks she seems so different. She adds that she was cold to her and didn’t cooperate. Hae-Soo feels sorry. Ji-Won thinks Moo-Jin’s article will be very big as he’s getting help from her husband and Hae-Soo.

Hae-Soo explains that it’s her first time meeting Hee-Sung. She adds that she and Moo-Jin knew each other because they were friends since they were young.