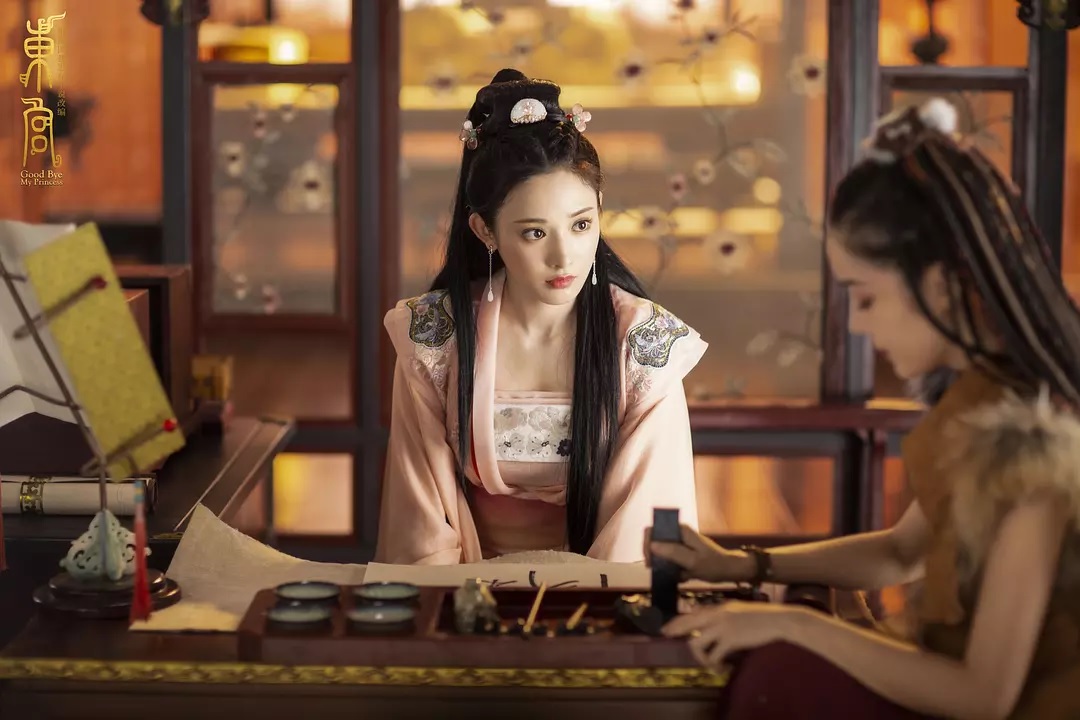 Note: From here on out there are specific plot spoilers for Goodbye My Princess Chinese Drama Episodes 9-10.

The warrior bursts into Qu Xiaofeng’s tent and ties up her and A Do. Gu Xiaowu steps in Tie Daer’s tent and persuades him to surrender. But Tie Daer refuses it and wants to save Dan Chi with his life. So Gu Xiaowu cuts off Tie Daer’s head. Qu Xiaofeng spots it and passes out.

She wakes up and remembers Gu Xiawu killed her grandpa when seeing the armor. She takes the blade and wants to stab him. But she cannot do that because she still loves him. So he does it for her. But Cha Mu stops Gu Xiaowu and stuns Qu Xiaofeng. He binds up his wound and reminds him that his mission.

The warrior who kidnapped Qu Xiaofeng tells Chai Mu that he put weak medicine in Qu Xiaofeng’s food and water. She lies in bed and sweats. Gu Jian shows up and wants to take her to leave. But Chai Mu and Gu Xiaowu surround him. Gu Xiaowu holds the sword but he doesn’t pull it out. So Gu Jian and Qu Xiaofeng leave. Pei Zhao arranges a troop of cavalry follow them.

A Du wonders why the cavalry didn’t arrest them, Gu Jian points out that the ninth is very important to Li dynasty. Qu Xiaofeng realizes Gu Jian cheated her in the beginning. He admits that Gu Xiaowu is the fifth prince of dynasty, and he is his cousin. He confesses that he is the only man who wants to protect her. But she doesn’t trust him anymore.

So he follows them and leaves the fruits and rabbit on the path. But she refuses to eat it. Li Chengye questions why Li Chengyin took the risk to kill Tie Daer, and Pei Zhao explains that Li Chengyin did it to avoid the casualties. Li Chengye takes care of Li Yan and promises him the contribution. Because Li Yan got injured when fighting with Dan Chi army.

Gao Xian gets message from his father who asks him to make Qu Xiaofeng marry Li Chengyin. Qu Xiaofeng and A Du arrive at Xi Zhou. But the palace is silence. A Du wonders why there isn’t any guard in their room. Qu Xiaofeng runs into Qu Wencheng at the court. When he asks her to leave, Gao Xian shows up with warriors. Qu Wencheng points to the warriors, and tells her that they murdered her mother.

An Guogong is talking with his friend about Gao Xian murdered the empress of Xi Zhou. A Do steps in and introduces herself to them. Qu Xiaofeng dresses up to be the maid and flees with A Do because the guard don’t recognize her. An Guogong takes the troop leaving Xi Zhou but Gao Xian stops them. Gao Xian recognizes Qu Xiaofeng, who dresses up to be a soldier. An Guogong threatens to report it to emperor. Gao Xian kills him and the rest of soldiers. The canyon is full of bodies in the snow day, A Du gets up from one of the bodies.

Qu Xiaofeng and A Do is chased by the soldiers, Gu Jian kills the soldiers. But A Do treats Gu Jian as enemy, and waves the knife to him. He keeps avoiding it. Qu Xiaofeng drops off the Ming Di, which Gu Jian gave to him. A Do stabs him when he distracts, and Gu Jian falls off the cliff.

Qu Xiaofeng and A Do get in the cave. Gu Xiaowu and Pei Zhao arrive. Pei Zhao blocks A Do’s way. Qu Xiaofeng arrives the Wang Chuan river. She jumps off even if Gu Xiaowu threatens to ruin her country. Because she wants to forget the miserable past. Gu Xiaowu jumps off as well, and wants to accompany her forgetting it.