This is the Recap & Review for Korean drama Graceful Family Episode 5. Je-Kook sentences Jae-Gu 7 years in prison because he broke the laws on waste water disposal. It shows that she is the judge who cannot be bribed. 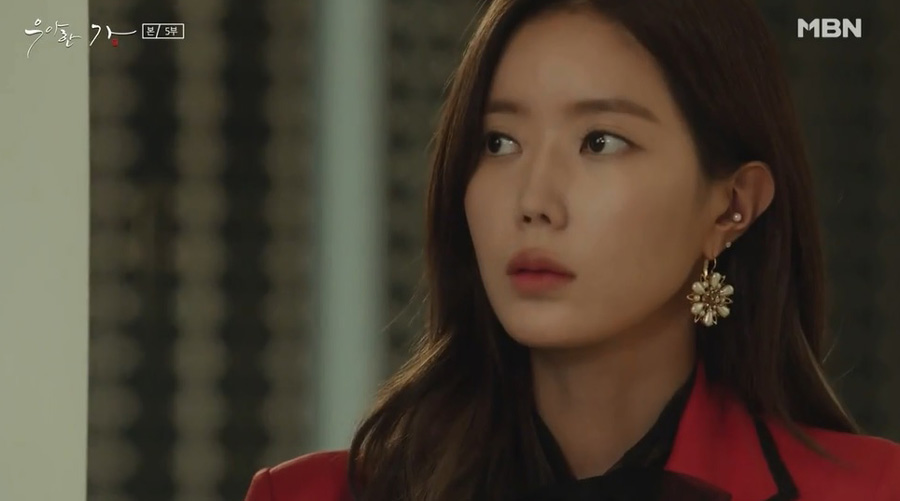 From here on out there are specific plot spoilers for Graceful Family Episode 5.

Je-Kook breaks into the office and asks the leader why he turned over MC Chemical’s Jae-Gu’s ruling. She wonders why the man was found as no guilty. The leader says that he was adhering to the principles of law. She is surprised and thinks he got a bribe from MC Group. He reminds her that there’re lines she shouldn’t across. She talks back that he is the one who crossed the line. He says that he was looking forward to have the first female chief justice.

Je-Kook learns that she’s appointed to another court, and she gets a call from Wang-Pyo. The two meet up. He tells her to join MC Group, and promises to help her.

Wang-Pyo arrives and tells people that he will give all of MC distribution and the real estates to Seok-Hee. He adds that the assets will be donated to charity if she dies.

Young-Seo asks Je-Kook if she already knew about it, and wonders why she didn’t tell them. Je-Kook says that she needs to confirm it.

It flashes back. Joo-Young tells Je-Kook that she looked into the phone and found out that the phone belongs to Yoon-Ja. Je-Kook thinks Yoon-Ja was playing for both sides. Joo-Young wants to look into the hospital and find out Wang-Pyo’s condition.

Je-Kook explains that they had to know what would say, and thinks they can do nothing. Young-Seo asks what they’re going to do if Seok-Hee says that she will manage the company. Je-Kook thinks directors will appoint her as CEO since she’s the major shareholder, and there is no way to stop her.

Wang-Pyo holds Seok-Hee’s hands and asks her if she is her Seok-Hee. She says yes, and he thinks he can die in peace now. He tells her that the hard times are over now and her time will come. She asks him to stay by her side for a long time. He promises it.

Seok-Hee asks Yoon-Ja if she is the one who has been sending her the texts. She says yes, and explains that she had another phone that TOP didn’t know about. Seok-Hee says that she thought Yoon-Ja was on her stepmother’s side, and she feels sorry. She thanks her for taking care of her grandfather.

Yoon-Ja tells Seok-Hee that her grandfather was already unconscious at the hospital due to an accident when her mother was killed. That’s why he couldn’t do anything when she was forced to go to the States. She tells her that her grandfather was always thinking about her, and he couldn’t even contact her because of TOP and just prepared for this day. Seok-Hee swears to return everything back to its place.

Lawyer Yoon leaves. Yoon-Do asks Seok-Hee if she is okay. She says that she just feels a little tired, and thinks he has something to say. He asks her what she meant to return everything back to its place. She says that she wants to find the real culprit instead of a fake one. She thinks there’s a lot of things she needs to work on.

Yoon-Do asks Seok-Hee to tell it to him when she needs his help. He thinks she needs him as she cannot use the company for personal reasons. She asks him if he knows how she has been living for the past 15 years. She tells him that she is going to do her own thing which has nothing to do with him, and it’s up to him whether he helps her or not.

Yoon-Do tells Seok-Hee that he worries about her. But she tells him to go home and take the day off tomorrow as they’re going to be busy. He has to leave.

Yoon-Ja gives the business card to Seok-Hee and tells her the person is the maid who’s stuck in prison. Seok-Hee learns that the maid’s name was Lim-Soon. Yoon-Ja says that she doesn’t know where she is now after visiting her at the time of the incident because of Je-Kook’s watch. She thinks it’s time for her to do something.

Eun-Ji cleans the table, and Jang-Soo praises her. She tells him that she treats him as her father as she is Yoon-Do’s friend. He thanks her for her help, and thinks she should leave as it will be late. She denies. He asks her if she waits for Yoon-Do. She denies and says that she is thirsty.

Yoon-Do shows up, and Eun-Ji asks him if he wants something cold to drink. He tells her to leave, but she stays to drink with him. Eun-Ji thinks Seok-Hee’s family is abnormal, and she is sure there’s a story there. Jang-Soo thinks Cheol-Hee isn’t the CEO’s real son. Eun-Ji agrees to it.

Yoon-Do gets a call from Seok-Hee who asks him to find Lim-Soon. Je-Kook walks in the meeting room, and tells her followers that the real fight starts. Sang-Won says that it’s hard to fight legally as the succession was legitimate. He adds that they’ve already sealed the succession with the National Tax Service, and the government likes it since they’re going to properly pay taxes. Joon-Hyuk thinks it’s the worst scenario that they expected.