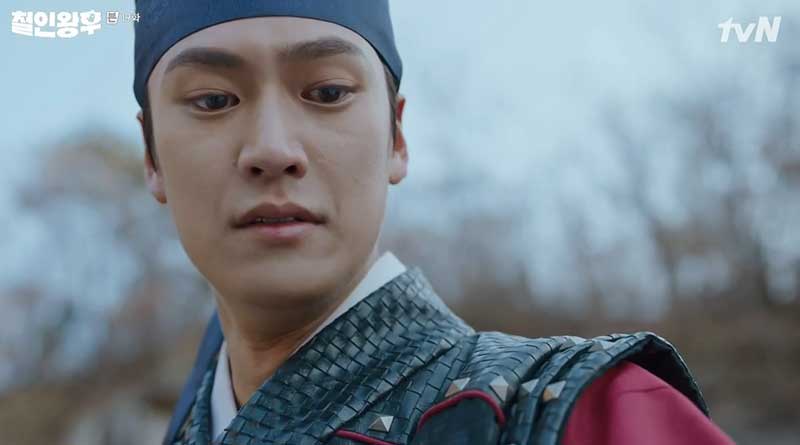 This is the recap for Korean drama Mr. Queen: Episode 19. So-Yong runs in the woods. Byeong-In hunts her and forces her to arrive at the cliff. He throws away his sword and walks to grab her neck. He tries to push her off the cliff. She intends to stab him with her arrow. But he makes the arrow go.

Note: From here on out there are specific plot spoilers for Mr. Queen: Episode 19.

Byeong-In asks So-Yong to tell him the truth, and threatens to kill her. She tells him that she became a female when she woke up. She says that she doesn’t know where So-Yong went. He grabs her neck tightly and intends to take her life. But he sees So-Yong’s smile so that he throws her aside. She coughs and steps back when he holds out.

So-Yong confesses to Byeong-In that she knows her because she has memories of his lover. The bodyguard arrives. Byeong-In picks up his sword and tells So-Yong to unite with him. Because he believes So-Yong is inside her body. She holds his hand. He defeats the bodyguard and takes her to run. But they run into the Masked Man.

Byeong-In is stabbed when he tries to protect So-Yong. So-Yong throws the stone to Masked Man. She flees with Byeong-In. Masked Man takes off his mask. We see his face. So-Yong takes Byeong-In to run. But he cannot move. She cries when she notes that he’s bleeding. He gives the letter to her, and tells her to take care of herself.

Byeong-In touches So-Yong’s hair and tells her to hide somewhere when he gives her the signal. She is in tears and asks him to flee with her. He rejects it and tells her to run away alone. She rejects it. So he points his sword at her. Masked Man spots them. Byeong-In fights with Masked Man. So-Yong takes the letter to run.

Byeong-In asks Masked Man who got him to do that. Masked Man reveals it was his dad. Byeong-In stabs Masked Man when he gets stabbed. So-Yong sees Byeong-In falling down. She cries but she has no time to be sad because the bodyguard is hunting her. Byeong-In remembers he hugged So-Yong when she fell down. He stared at her eyes and it made her laugh.

So-Yong doesn’t know what to do when the bodyguard looks for her. She hides behind a big tree. The bodyguard doesn’t find her. He goes somewhere. Masked Man takes his blade to approach the tree. But he chooses wrong tree, and walks away when his friend finds Queen.

So-Yong opens the letter. But she is furious to throw away the letter because she’s alone. She thinks she can do nothing. She gets on knees and sees someone walking to her with a torch. She thinks he comes to catch her, so she gives in. The man takes off his mask and recognizes So-Yong. He throws away the torch and hugs her. It makes her cry.

Cheoljong comforts So-Yong that it’s a good thing that they’re alive. But she tells him that Byeong-In got killed for protecting her. He tells her that her friends are alive. He tells her to the camp. She hugs Hong Yeon after seeing her. She asks about Lady Choi. Lady Choi cries. So-Yong walks to Lady Choi.

So-Yong wonders why Lady Choi isn’t dead because she saw her getting cut. Lady Choi reveals she tripped so that she was hurt too much. So-Yong hugs Lady Choi and Hong Yeon. She cries because she thought they were killed. Lady Choi asks So-Yong to stay away from her. She tells her that she touched her wound and it was hurt.

So-Yong apologizes to Lady Choi. Hong Yeon asks So-Yong where she went, and reveals she looked for her. Lady Choi reminds So-Yong that she was spotted by King. So-Yong has an eye contact with King. King takes off So-Yong’s clothes and spots her wound. He cleans the wound with the cloth. He thinks she shouldn’t look for him because she has a baby.

So-Yong tells King that she went out of palace because she missed him. He tells her that he missed her as well, and holds her face. He sheds tear and kisses her lip. She sheds tear as well when she accepts his kissing. Jwa-Geun gives a bag of medicine to Sal-Soo, and asks him if she saw the person clearly. He takes the medicine and tells him that it was King.

Hwa-Jin posts the paper on the wall. People know that King is alive. So-Yong walks out of the house. She feels chilly. King puts her hands in his arms to warm her. But she feels uncomfortable and wears the scarf for him. She notes that people jump in front of her. He reminds her that it’s the method she taught him.

So-Yong tells King that Sal-Soo intended to take her life. She says that he failed because of Byeong-In. He tells her that Sal-Soo is the follower of Jwa-Geun. She shows the letter which Byeong-In gave to her. He realizes that he needs to return to the palace.

So-Yong goes to see Byeong-In. She spots him kneeing on the ground. She grabs his hand and makes a grave for him. King stabs Byeong-In’s sword in his grave. So-Yong sees him off and walks away with king. Physician Park stands in front of the wall. She notes that Jwa-Geun walks to her. She smiles at him when he thinks she can hear. He pulls out his sword and kills her.

So-Yong and King hide in the cart. She tells the driver to help them get into the palace. King wants to So-Yong when he holds her face. But she slaps him and tells him that it isn’t the right time. He hugs her after they found the right position. The driver arrives at the gate. He gives some money to the guards. So the guards let him leave.

Jwa-Geun places the gun on the table. He tells Sal-Soo to shoot him when he sees him.