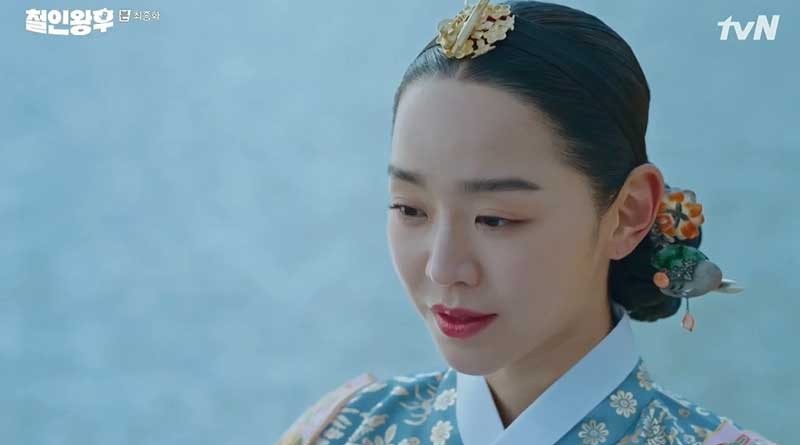 This is the recap for Korean drama Mr. Queen Ending: Episode 20. Jwa-Geun spots the cart and gets his follower to open the cart. The follower tells Jwa-Geun that there is nothing inside. Jwa-Geun pulls out his sword and stabs the cart. He walks away. 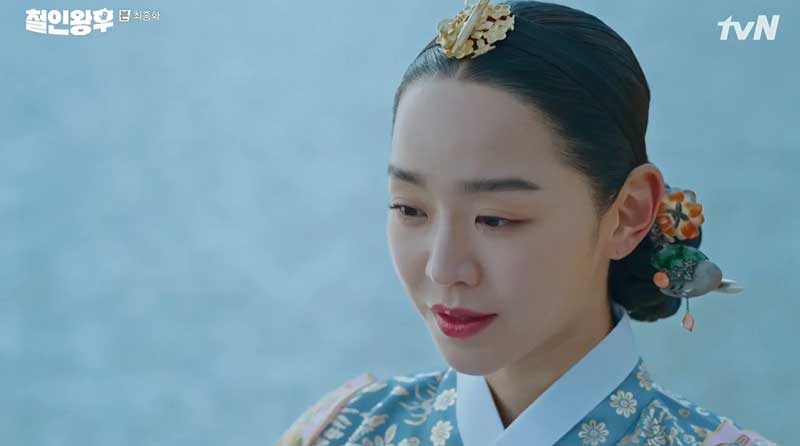 Note: From here on out there are specific plot spoilers for Mr. Queen Ending: Episode 20.

Queen walks out of the cart. The guy calls her when he’s kidnapped. King walks to the guy and stuns him. He decides to walk away because he doesn’t have too much time. So-Yong stops him and gives him a kiss. He is confused but he kisses her back. She wipes her mouth and follows him.

Chief Eunuch is packing his stuff. King shows up and startles him. Chief Eunuch cries to King because he mistakes that he is dead. He gets on knees to him. King tells Chief Eunuch to join him. Chief Eunuch believes it when he sees So-Yong. She tells him to lower his voice. He feels happy and laughs.

So-Yong walks King after their followers got rid of the bodyguards. She praises him for his clothes. He feels happy and wants to say something to her. But the bodyguards show up. King runs to kill the bodyguards. But Prince appears and casts the dagger to So-Yong. She avoids it. He is furious to rush to her. She takes out her dagger and casts it to him.

Prince’s leg is hurt. King asks So-Yong how she did that. She brags that she is good at using kitchen knife. Prince tries to attack So-Yong. But King defeats him. Prince wants to pick up his sword. King places his sword on Prince’s neck. Prince hears the sound and thinks King is going to fail. King kicks Prince. He is surprised that his enemies took action in advance. But So-Yong tells him that she has a plan b.

Byung-Hak opens the seal box and finds out that the seal is missing. He is shocked and shows the empty box to Queen Sunwon. Kim Hwan takes the seal and hides in the room. He remembers So-Yong asked him to steal the seal. King learns that they have the seal. He feels happy. Prince is furious to attack King after he heard it. But he gets killed.

So-Yong arrives at the palace with King. She holds his hand and asks him if he fears it. He admits it and walks forward with her. She spots Sal-Soo taking the gun to aim at King. So she stands in front of him. She gets hurt. King finds the blood on her dress. She falls down and thinks she should stop her enemies.

King takes out a cloth and tries to treat So-Yong. But Sal-Soo shoots King. Director Hong shoots Sal-Soo. Sal-Soo’s neck is hurt. He jumps off the rooftop and throws away his gun. He flees. King passes out. So-Yong tries her best to climb to him. But she feels painful. She cries because she wants to see if King is fine. She returns to the hospital when she touches King’s finger.

Bong-Hwan wakes up and thinks he should help King. He gets off the bed and robs the detective’s phone. He runs out of the room and jumps off the building when people chase him. He goes to the library and reads the book. He wishes King to be alive.

It flashes back. So-Yong wakes King up. Jwa-Geun shows up and bulls out his sword. He intends to kill King. So-Yong takes her hairpin to stab Jwa-Geun’s leg. Jwa-Geun feels painful and steps back. He tries to stab King. But King rolls aside. He takes his sword to block Jwa-Geun’s hit, and cuts him. But Jwa-Geun avoids it.

King stands up and tells Jwa-Geun that he’s the king. But Jwa-Geun cuts him down. So-Yong tries to help king. But her baby tells her that he is going to be born. King takes his sword to rush to Jwa-Geun. He cuts his sword off. Jwa-Geun trips. He notes that his face is bleeding. King places his sword on Jwa-Geun. Jwa-Geun closes his eyes to accept his fate.

But King only cuts off Jwa-Geun’s crown. Jwa-Geun begs King to take his life. But King tells Jwa-Geun that he wants him to feel guilty. Jwa-Geun takes the sword and wants to kill himself. King takes away Jwa-Geun’s sword. He tells him that he will keep his life no matter what he does. Jwa-Geun yells because he feels painful.

Director Hong shows up and tells King to leave. He promises to protect So-Yong, and gives the seal to him. King wears the scarf for So-Yong. He takes the seal away. Queen Sunwon scolds the ministers and thinks they’re trashes. She notes that her son hides behind the throne. She cheers him up. So he sits on the throne.

King shows up. Byung-Hak passes out after he saw the blood on King’s face. King walks to Kyung-Won and places the seal on the table. He tells him to get lost. Kyung-Won runs aside. King turns around and looks at Queen Sunwon. So-Yong lies in the bed. The maids takes care of her.

King breaks into the room. He grabs So-Yong’s hand and asks the doctor about So-Yong’s condition. The doctor tells King that the baby and So-Yong will be dead. So-Yong wakes up. She yells because she is in pain. Lady Choi tells King to get out of room because they need to do something to So-Yong. King feels hopeless.

King takes care of So-Yong. She opens her eyes and takes a look at him. The doctor sees So-Yong and reports the good news to King. King tears up when he holds So-Yong’s hands. She smiles at him.