This is the recap for K-Drama My Roommate Is a Gumiho: Episode 1. Woo-Yeo drinks with the ladies. The ladies mention the monster Gumiho. Woo-Yeo tells the two that he doesn’t want to drink with them. Because he worries that he will be eaten by the fox. 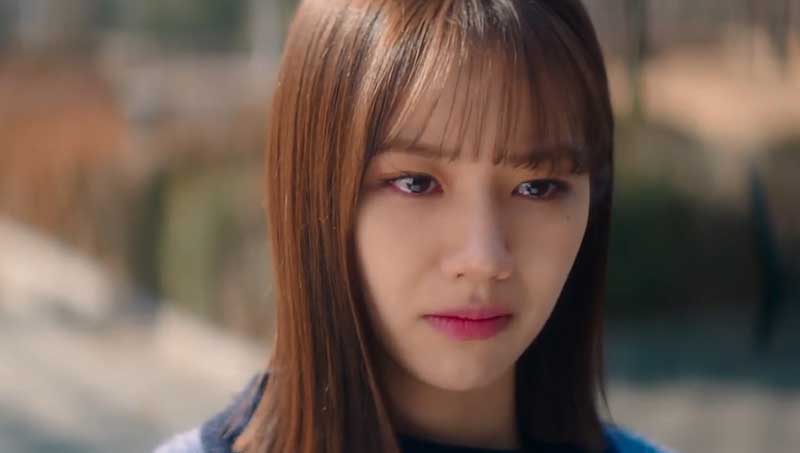 Note: From here on out there are specific plot spoilers for K-Drama My Roommate Is a Gumiho: Episode 1.

Woo-Yeo drives the car to arrive at the building. The girls feel happy to see him. He nods and greets them. He goes to the office and has a meeting with Yoo-Jin. She asks him out. But he wants to do it next time. She follows him and asks him for giving a ride. He rejects it. Yoo-Jin tells him that she wants to be a friend of him. She thinks he was hurt by a woman.

Lee Dam Dresses Up To Be A Queen

Lee Dam tears up when she stands on the bridge and dresses up to be a queen. She gives a touching speech to the maid Soo-Kyeong after Soo-Kyeong asked her why she cried. She ends the speech because her eyes are hurt by the dust.

Soo-Kyeong blames Lee Dam for getting her to be the maid because she thinks she’s outstanding. Lee Dam talks back that she bought the dresses. Someone calls her and reminds her that the time is up. She has to leave the bridge.

Lee Dam drinks with Jae-Jin. She learns that he got dumped twice. He tells her not to talk to him because he’s very sad. She mentions what she said that his girlfriend is a bad girl. He thinks the girl didn’t intend to hurt him, and begins to tear up. She tells him to end the relationship. But he says that he’s thinking about the girl.

Jae-Jin wipes his tears and wishes some bad things happening on his lover. But he still tries to call the girl. Lee Dam takes the phone away. He begins to sing the song and fall asleep because he’s drunk.

Soo-Kyeong needs to take the class. But Jae-Jin doesn’t allow her to leave. Lee Dam tells Soo-Kyeong to do anything she wants to do because she will handle the boy. She carries Jae-Jin and walks at the street. She trips because he’s too heavy. He wakes up and begins to run. He confesses his feelings to the woman he loves. She chases him and finds out that he lies on the expensive car. The car owner Woo-Yeo is standing aside.

Lee Dam carries Jae-Jin off the car and tells him not to touch the car. She wants to compensate. But he rejects it because she’s a student. She thanks him for doing so. But she trips when she tries to take Jae-Jin away. Woo-Yeo tries to help Lee Dam. But his marble drops into her mouth.

Lee Dam wakes up and finds out that she’s at Woo-Yeo’s house. She asks him why she’s there. He tells her that he took her home because she ate his marble. He reveals he’s a Gumiho. He wants to live with her for the marble. She gets angry and tries to call the police.

Woo-Yeo turns into the Gumiho. Lee Dam is scared to pass out. She wakes up and sees Woo-Yeo again. She flees when he tries to get the tea for her. She notes that someone is following her. So she closes the door after she returned home.

She finds out that the person is her brother Lee Dan. He’s startled by her when she stares at him. She tells him that she saw a Gumiho, and asks him to shoot the Gumiho for her. But he wants to shoot her instead.

The Marble Begins to Make Troubles

Someone touches Lee Dam by mistakes in the bus. She doesn’t feel well because of the marble. The man asks the driver to stop the car because he thinks she’s going to go to the restroom. Lee Dam goes out of the restroom and runs into Soo-Kyeong.

Lee Dam tells Soo-Kyeong what happened in her belly. Soo-Kyeong tells Lee Dam to go to see a doctor. But Lee Dam rejects it and remembers she ate Woo-Yeo’s marble. Moo-Geun hugs Lee Dam from her back to greet her. But she passes out.

Hye-Sun asks Woo-Yeo for buying her a meal. But he rejects it. She thinks they should have a talk because they haven’t see each other for a long time. So he takes her to the restaurant. She thinks he doesn’t become a human because he rejected to the power from people.

Lee Dam runs into Woo-Yeo at the street. She asks him if his marble made her sick. He admits it and tells her that she will get pain when she encounters tiger man. He touches her face to cure her. He persuades her to live with him because it’s only way to save her.

Lee Dam packs her stuff and tells Lee Dan that she’s going to move out for some days. She tells him to call the police if something bad happens on her. But he tells her to use something to protect herself. She goes to the store to buy the flashlight.

Lee Dam moves in Woo-Yeo’s house. She’s startled when he stares at her from the window. He shows up in front of her and takes the luggage for her. The weapon Lee Dam just bought drops. He asks her about it. She explains that it’s a gift for him.

Lee Dam wakes up and takes a look at outside. She sees Woo-Yeo taking a sickle. He stares at her with scary eyes. She flees to the living room, and sees the blood on the floor. He gets back and walks to her. She tries to step back but she trips. He explains that he just fixed the tree.

Lee Dam Reminds Herself That Woo-Yeo Is a Gumiho

Lee Dam wakes up in the morning. She finds out that Woo-Yeo is very handsome when he’s making tea. But she reminds herself that he’s a evil Gumiho. Woo-Yeo tells Lee Dam to drink the tea, and thinks it will be good for her liver. She’s vigilant.

But Lee Dam feels pleased after Woo-Yeo showed the foods he bought her. He tells her that he’s going to leave for some days. She feels happy. But she’s startled after he turned into a middle-aged man. Soo-Kyeong tells Lee Dam that they’re going to go to the club. Lee Dam wears a beautiful black dress to show up.

Soo-Kyeong takes Lee Dam to get into the club. But Lee Dam’s phone drops. The guy picks up the phone for her. But he catches the chance to hug her. She realizes that he’s a tiger man when she feels pain in her belly.

Yoo-Jin praises Woo-Yeo and asks him for drinking with her. But he ignores her and goes to call Lee Dam. But she doesn’t pick up his phone. She leans in his arms when he finds her. She passes out. Woo-Yeo takes away Lee Dam’s phone from the guy, and throws him away when he wants to fight with him.

Gumiho Tells Lee Dam Not To Fear Him

Lee Dam wakes up in the cafe. She refuses to get up because she has no face to see Woo-Yeo. He tells her that he’s going to buy her a cake. She apologizes to him for making him come to save her. He tells her not to go to the club, and asks her not to fear him. Because she contains his bead. She feels happy and thinks he’s a good Gumiho.