These are the Recap & Ending for The Glory K-Drama: Episode 8. Hye-Jeong gets on knees to Dong-Eun. She asks her for her mercy. She tells her that it was a mistake. Dong-Eun holds the fire wood to be close to Hye-Jeong. Hye-Jeong is scared to step back.

How Does Yeon-Jin Find out that She Loves Do-Yeong? 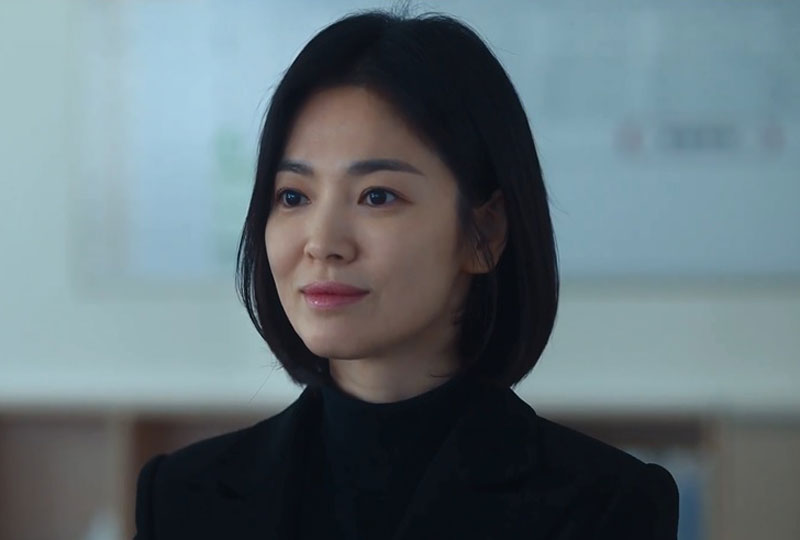 Note: From here on out there are specific plot spoilers for The Glory K-Drama: Episode 8.

Hye-Jeong reminds Dong-Eun that she’s a flight attendant. She thinks she’s crazy. Dong-Eun throws away the fire wood. She mentions Hye-Jeong did it to her everyday. Hye-Jeong stands up. She begs Dong-Eun not to tell Tae-Uk’s mother about what she did to her.

Hye-Jeong asks Dong-Eun not to contact Tae-Uk’s mother before she gets married. She tells her that she needs the marriage because she’s resigned. Dong-Eun tells Hye-Jeong that she doesn’t want to get anything from her. She asks her about her idea.

Do-Yeong helps Ye-Sol get in the car. He notes that Jae-Jun still watches his daughter. He walks to him and asks him about it. Jae-Jun tells Do-Yeong that he likes to watch little girls laugh. He thinks Ye-Sol isn’t like Do-Yeong. Jae-Jun asks Do-Yeong if he met with Myeong-O. Do-Yeong claims that he doesn’t need Myeong-O anymore. He drives away.

Dong-Eun walks out of the building. She sees Jae-Jun. She remembers he stared at her chest when she was soaking. She protected her chest. He told her not to drink milk before he left. She cried. Dong-Eun walks to Jae-Jun. He asks her if she was close to Ye-Sol for Yeon-Jin.

Dong-Eun denies it. Jae-Jun mentions the rainy day. She gives him a slap. He thinks she’s grown up because she knows how to get angry. He asks her about her scars. She tries to give him another slap. But he holds her arm. He takes a look at her scars. He tries to bite her arm. But he gives up the mind. He tells her not to touch Ye-Sol.

Do-Yeong meets with Hye-Jeong at the restaurant. She feels happy after she saw the present. But he asks her about the relationship of Dong-Eun and Yeon-Jin. He reveals he knew Dong-Eun when he played Go with her. Hye-Jeong laughs. She asks Do-Yeong if his wife knows he’s meeting with her. Do-Yeong tells Hye-Jeong that he won’t tell his wife about their meeting up. She reveals Yeon-Jin bullied Dong-Eun in high school.

It flashes back. Yeon-Jin walks into the gym. She asks Dong-Eun to clean the bathroom for her. Dong-Eun rejects it. Yeon-Jin gives Dong-Eun a slap. She asks Myeong-O to kick Dong-Eun.

Hye-Jeong tells Do-Yeong that Dong-Eun had to drop out of the school because of it. She tells him to hear the rest story from Yeon-Jin. He realizes that Dong-Eun wasn’t the first one Yeon-Jin bullied. Hye-Jeong asks Do-Yeong to tell Dong-Eun that she told him the story when he sees her. She takes away the present.

Do-Yeong remembers Dong-Eun told him that she planned something. He goes to the park. He sees Yeo-Jeong playing go. Yeo-Jeong introduces Do-Yeong as his friend to the people. He walks to him. Do-Yeong is surprised that he’s Yeo-Jeong’s friend. Yeo-Jeong asks Do-Yeong to help him.

Yeo-Jeong notes that Do-Yeong is checking his phone when he plays Go with him. He believes that his wife doesn’t wish him to play Go. He reveals he moved to Semyeong for taking revenge. Do-Yeong laughs. He thinks Yeo-Jeong cannot make it because he’s not allowed to use a gun. Yeo-Jeong points out that he can kill the person with a knife if he’s close to him. He feels sorry for startling Do-Yeong. He hands over his business card to him.

Yeo-Jeong tells Dong-Eun that Do-Yeong is very tall. Dong-Eun points out that Yeo-Jeong is tall as well. Yeo-Jeong wishes that he’s the only tall guy. He thinks Do-Yeong was very cool to make him look like a fool. It makes her smile. She reveals Do-Yeong didn’t call her. Yeo-Jeong believes that Do-Yeong will call Dong-Eun soon.

Do-Yeong returns home. Yeon-Jin is waiting for her husband. She blames him for answering her texts. She tells him that she wants to learn how to play Go. He asks her if she’s Dong-Eun’s friend. Yeon-Jin realizes that Dong-Eun badmouthed her. She reminds her husband that she and Dong-Eun come from different worlds. She asks him if Dong-Eun told something to him.

Do-Yeong mentions Yeon-Jin called Dong-Eun a crazy woman. He asks her if she worried that Dong-Eun would hurt their daughter. Yeon-Jin reminds Do-Yeong that they have gotten married for ten years. She tells him to trust her. She thinks he shouldn’t listen to what others said. She asks him to let her and their daughter shine.

Gyeong-Ran sees Yeon-Jin’s scar when she helps her change shoes. She wants to bring a new band-aid to her. Yeon-Jin throws a fit to Gyeong-Ran. She gets a call from Jae-Jun who asks her for a meeting up. Jae-Jun tells Yeon-Jin to get a divorce with Do-Yeong because she wants to be Ye-Sol’s father.

Yeon-Jin thinks Jae-Jun is insane. He asks her if she has feelings for Do-Yeong. He mentions she didn’t tell Do-Yeong about Dong-Eun because she worried that Do-Yeong would dislike her. Jae-Jun tells Yeon-Jin that he will take her side even if he knows what she did to Dong-Eun. He believes that it’s love. She realizes that she loves Do-Yeong.

Yeon-Jin looks at herself in the mirror. The maid brings the medicine to her. Yeon-Jin tells the maid to leave. She gets a call from Yeong-Jun who asks her for a meeting up. Yeong-Jun gives the papers of Dong-Eun to Yeon-Jin. He tells her that what Dong-Eun did are clean. She asks him about Dong-Eun’s mother because the woman did a great job in high school.

Mi-Hee eats apple on the street. The thugs watch her. Yeo-Jeong asks Dong-Eun about the woman in the photo. She reveals the woman is her mother. Sang-Im goes to the prison to see Yeong-Cheon. He feels sorry for what he did to her husband. She blames him for sending letters to Yeo-Jeong. She tells him that she will take his life if he continues to send letter to Yeo-Jeong. Yeong-Cheon reminds Sang-Im that she’s a doctor who cannot kill a person. He reveals her husband was killed because of the oath. He tells her that he wishes her son to go to hell. She gets angry but she cannot do anything to him.

Dong-Eun shows the cash to Hyeon-Nam. She asks her for Seon-A’s passport. She tells her that she’s going to send Seon-A to study abroad. He explains that Seon-A needs to leave Korea because they’re going to begin the plan. She admits that she lied to Hyeon-Nam. She tells Hyeon-Nam that she cannot have a lovely dinner with her daughter.

Do-Yeong calls Dong-Eun. He asks her for a meeting up. She meets with him in the park. She thinks he wants to know if she intended to be close to him. He tells her that he wants to ask her questions before his wife because she’s a victim.

Episode 8 of The Glory K-Drama ends with Yeon-Jin getting into the building. She sees her house. She smiles and calls someone. She asks the guy to open the door for her when she hands over the cash to him. He recognizes her. But she tells him that it won’t change anything. She smiles when she looks at the camera. She walks into Dong-Eun’s room. She sees the photos on the wall.

Dong-Eun admits to Do-Yeong that she learned Go for him. But she tells him that she found out that she liked Go very much after she had learned it. She mentions playing Go is like building a house. She reveals she wanted to be an architect. He asks her about the house she lives. She tells him that he will be hurt if he knows it. Yeon-Jin regrets for not killing Dong-Eun when she stares at the photos. Do-Yeong shows up. Yeo-Jeong goes to the morgue to check So-Hee’s dead body. He finds out that the box is empty. Dong-Eun plays Go alone.