These are 1-2th episodes of The King of Blaze Chinese Drama Recap, Zhong Tian comes from heaven and looks for the energy, which could save his homeland. He runs into his love Feng Jian, but she stabs him with her sword because she thinks he killed prince. 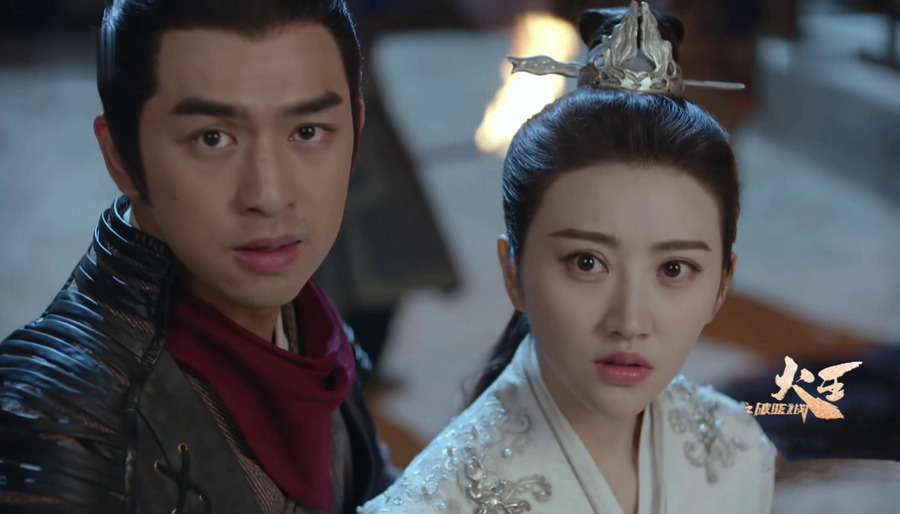 Note: From here on out there are specific plot spoilers for The King of Blaze Chinese Drama Episodes 1-2.

One thousand years ago, there is a star field in the universe, which has beautiful mountains and rivers. The God of fire Zhong Tian, Aeolus Qian Mei and the God of mountains Di Yun maintain the star field’s peace. The Gods take a hit when they’re Against the dark forces. Qian Mei dies for saving Zhong Tian, and star field faces the great calamity. Zhong Tian goes to remote east region looking for the power to save homeland.

Zhong Tian is healing in the caravan, and remembers the crisis in star field. He doesn’t know if he can find new energy or not. His friend Shang Xuan is waiting for him. Yu Qianqian calls him to eat meal, and mentions the flame mirror of Bafang temple. The flame mirror can get rid of beast. The tax officer Mr. Song flees to the caravan, and claims he was attacked by The thieves. Shopkeeper Qi wants to save Mr. Song, but he is killed by the leader, wolf king of desert. Shopkeeper Qi isn’t wolf king of desert’s opponent. So Zhong Tian helps Shopkeeper Qi to catch the wolf king.

Shopkeeper Qi asks the thieves to be out of the village with wolf king’s life. Qi Le opens the head of the Wolf king, Zhong Tian unexpectedly finds out that the Wolf king and his friend Hao Yue looks exactly the same. The Wolf king frowns, immediately saying he did not know Hao Yue. At night, the Wolf king struggles with the chain as hard as he could. Zhong Tian asks him the reason of killing innocent. Wolf King claims he only kills those who should be killed, and he did it for removing the evils from the people. He doesn’t regret what he has done. Hearing Wolf King’s words, Zhong Tian unties his chains to release him.

The people of Taishi Department is going to stay in the hotel. Zhong Tian and Hao Yue arrive at the hotel, he doesn’t expect that Taishi Department sent a woman there. The woman has pretty eyebrows, named Situ FengJian who is prince’s best friend. She arranges the room for prince, the maid Xing Qiu thinks Feng Jian is going to be the chief. But Feng Jian thinks the most important thing is to protect prince. She knows the mirror meeting is hidden dangers.

Zhong Tian and Hao Yue are send to prison. Feng Jian visits him, and Zhong Tian claims he wants to do business in imperial city. So she asks him how he got stuff with distance. He is silent. She doesn’t trouble him, and leaves the foods. Zhong Tian moves to Hao Yue and takes him to leave the prison. Hao Yue marvels at Zhong Tian’s ability. Feng Jian investigates Zhong Tian’s history and hands over her token to Xing Qiu. She wants prince to protect Zhong Tian and Hao Yue. Li Jingzhong leads people to show up, and mentions Zhong Tian disappeared. He wants her to accept the investigation. She agrees.

In the morgue, the coroner is inspection the bodies. One of the man in black wakes up and stabs poison sting to his companions. The bodies are poisoning, and begin to hurt people. Feng Jian and Li Jingzhong fight with the bodies. But the sword cannot hurt them.

They detect the weaknesses of the bodies, and defeat them with flame. The abbot introduces the history of flame mirror to prince. Flame mirror defeated devil in God and Devil’s war. Prince admires flame mirror. Jing Qiu takes Feng Jian’s token to show up, and cries out. He decides to walk out of temple since Feng Jian is in danger.

In the barracks, Feng Jian studies the poison needle pulled from the corpse, concluding it’s witchcraft of black clothes sect. But black clothes sect comes from western regions and isn’t controlled by court. So they cannot attack them. Prince arrives and wants to arrest Li Jingzhong, who didn’t respect Feng Jian. She rejects Prince’s concern and asks him to forgive Li Jingzhong. Prince agrees. The man in black flees to the camp of black clothes sect, and reports the message to chief. But chief thinks prince’s life isn’t important anymore since the meeting is coming.

The court suspects Zhong Tian united men in black to murder prince. But Yu Qianqian doesn’t believe it. Zhong Tian remembers mark of caravan when the man in black threw out the black powder. Shopkeeper Qi admits that his business isn’t good, so he carried the black powder to Western Regions. Zhong Tian promises to keep the secret for him, but worries those men in black will use it at the mirror meeting. So he decides to join the caravan and stop them. Xing Qiu mentions prince’s feelings to Feng Jian. But she knows that she didn’t fall for him, and doesn’t give the wish to him.

The next day, Feng Jian asks Li Jingzhong to guard the mirror pavilion, and she protects prince. Zhong Tian thinks the flame mirror can save heaven since he can get rid of devil. It’s dark when prince touch the mirror. Zhong Tian looks at the sky and is shocked that wing clan arrives. Shopkeeper Qi knows the devil is coming, so he asks others to leave. The energy of flame mirror hurts prince, Abbot wants to protect prince. But all of monks turn into carrion. Zhong Tian saves prince, but prince passes out. Feng Jian thinks Zhong Tian murdered prince, so she stabs his chest with the sword. He remembers Qian Mei did same thing, and gives his life to her. She is shocked by his behavior, and releases her sword. Zhong Tian tells Feng Jian that he will prove her innocent, and leaves with Hao Yue.

Zhong Tian is injured, Hao Yue stays with him. Li Jingzhong decides to take prince returning court. Feng Jian hears someone calls Qian Mei, and looks for the person. She is close to Zhong Tian but she didn’t see him. Li Jingzhong takes people arriving and stabs Zhong Tian who is under the straw. Zhong Tian opens his eyes and takes Hao Yue to leave with his last power.

Feng Jian escorts prince to court and is arrested. Pei Luoqing sneer at her that she was just a abandoned kid. The dog eat sun in the sky, Pei Luoqing thinks it means bad luck and wants to report to the director. But she is blocked. She is furious to break into director’s room.

Zhong Tian wakes up after a few days. Feng Jian asks Li Jingzhong to speak out the real person stealing flame mirror, and returns her innocent.