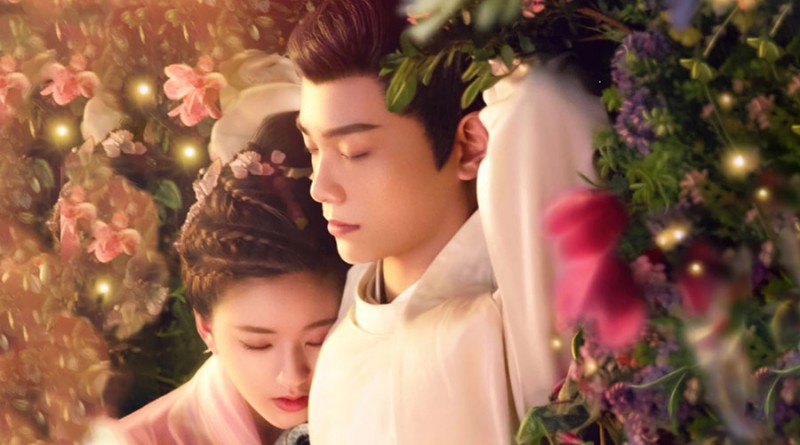 Chen Qianqian dies for Han Shuo on The Romance of Tiger and Rose.

The Romance of Tiger and Rose: Episode 21 Recap

This Romance of Tiger and Rose recap contains spoilers.

Chu Chu thinks Han Shuo blames her for the fault of Qian Qian, and asks him if he only has Qian Qian in his mind. Qian Qian and Pei Heng arrive before Han Shuo kills Chu Chu. Han Shuo learns that Qian Qian chose her mom and rose city. The follower reports that the bandits helped them get the city gate.

Qian Qian visits Han Shuo in the jail. He feels regret that he didn’t get Meng Guo to be his follower. She tells him that she came to save him. But he thinks Rose City Chief won’t let him alive for keeping her face. He says that he doesn’t trust her anymore. She complains that it will run with his idea no matter what she does. Qian Qian takes off Han Shuo’s clothes, and sleeps with him.

Rose City Chief thinks she must kill Han Shuo, and orders to do it. Qian Qian stops the killer and hugs Han Shuo. She wishes her death can give a ending to the disaster, and stabs herself. Pei Heng cries, and Qian Qian dies in his arms.

Pei Heng sees Qian Qian and thinks he was wrong to attack Han Shuo and get Rose City Chief to kill him. Han Shuo emphasizes that Qian Qian prefers to stay in the coffin because of Pei Heng. Pei Heng is furious to grab Han Shuo’s clothes, and thinks Qian Qian didn’t see his real face.

Han Shuo beats Pei Heng and tells him to forget Qian Qian. But Pei Heng says that he cannot forget her, and feels regret for making her wait too long. He thinks he shouldn’t give Qian Qian to Han Shuo. But Han Shuo points out that he fought for Qian Qian, and his true heart is treated like grass by Pei Heng.

Qian Qian admits it and tells Han Shuo to leave. She tells Pei Heng that she heard his confession, and thinks they’re impossible in the beginning. She tells him that the one he imagines isn’t her, and thinks he should treat her dying in the wedding night. But he points out that she doesn’t die, and he feels lucky that he fell for her after her wedding.

Pei Heng adds that his life had meaning from that moment, and she told him to do what he wants to do like women. But he found out that his dream is her. Qian Qian points out that she only knew what is love after encounter Han Shuo. She tells him not to miss her as he will encounter a good woman. He grabs his fists tightly, and tells her that he won’t like her anymore.

Qian Qian climbs out and wonders why Mom didn’t say anything to her. Han Shuo thinks Rose City Chief knew Qian Qian’s plan. Rose City Chief learns that Qian Qian pretended to die, and thinks she did it for rose city. She tells Sang Qi to let Qian Qian stay at the cemetery, and gives the leaving chance to her.

Chu Chu tells Zi Ying to die at the cemetery, and she wants to take back flower badge as she doesn’t want men to own power.

Zi Ying kidnaps Qian Qian from the coffin, and he tries to kill her. Lin Qi saves Qian Qian, and asks Zi Ying if Chu Chu sent him there. He tells her to kill him. Qian Qian tells Meng Guo to tie Zi Ying up.