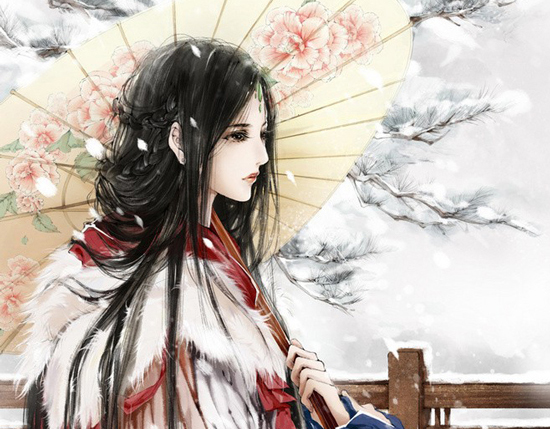 Yun Meng leans her body on the slave girl while feeling sickness. Qiu Lian hides her guilty at the same time. She is suspect Yun Qianmeng sensed her previous intention while she sent out chill opening eyes.

“Young master slept for one hour because of losing lots of blood. Fortunately, she is safe now because old lady’s soul protects her.” Qiu Lian covers quilt for Yun Qianmeng, saying with red eyes while seeing queen’s servants arrive.

Seeing Qiao Lian hides her intention in such short time, Yuan Meng sneers in her mind and pretends weakly, pointing to the desk which is in front of her and says, “I am thirsty, Qiu Lian gets me some water!”

Then, closing her eyes and takes a break.

Qiu Lian has to follow her directive and gets her a cup of water while seeing servants discovery Yuan Qianmeng is alive and reports it to queen.

She found Yun Qiaomeng falls asleep while she went back to bed. Some brave servants look at them. Qiu Lian has to obey her master’s instruction to hold cup standing in front of her and waits her waking. But, her hands are is numb and feet is tingled after half a hour. Her eyes send out anger intention.

Yun Meng opens her eyes slowly while she isn’t vertigo. While seeing Qiu Lian’s impatient, she rises her hand with smiling and says, “Are you tried? Please give it to me!”

Qiu Lian just wants to deliver the heavy cup after seeing she wakes in the end. She extends her right hand with anger and gives the cup to Yuan Qianmeng without seeing a single eye.

“Impolitely!” At this time, there is a serious voice comes from doorway. Servants recognize their master’s voice and kneel down except Qiu Lian.

“Your highness!” Qiu Lian kneels down at this time after hearing servant’s crying out. She trembles and lowers her head when compares to her previous action. She glances the person’s clothes behind queen.

“Queen…” Yun Qianmeng wants to off her bed with fear, but her body cannot and has to lie in her bed, looking at Queen with regret.

“My child, How could you so silly! Shui Er, Bin Er, help your miss lie in bed!” The Queen helps Yun Qianmeng lie in bed in person, then orders the two maids and puts her intention in Qiu Lian who kneels down in front of her.

“Yes!” Qiao Lian is confident after knowing she is the Queen. She raises her head without Queen’s permission.

“Anyone, slapping her. She didn’t call her maid when I asked her.” It seems like Queen wants to give Qiu Lian a lesson. The maid who stands beside Queen begins to execute Queen’s order before Qiu Lian doesn’t reaction.

“Queen, please cool down your temper! I have known the mistake!” Qiu Lian fears after slapped.

She withdrawals her honor and gives Queen kowtows to beg her forgiving her.

“Bah! How can you dare to beg for my mercy?”