This is the Recap & Ending for K-Drama Ghost Doctor: Episode 2. Young-Min drives his car away. The car almost hits Seung-Tak. Seung-Tak blames Young-Min for doing so. He gets a call from Jae-Won who asks him for doing something for him. 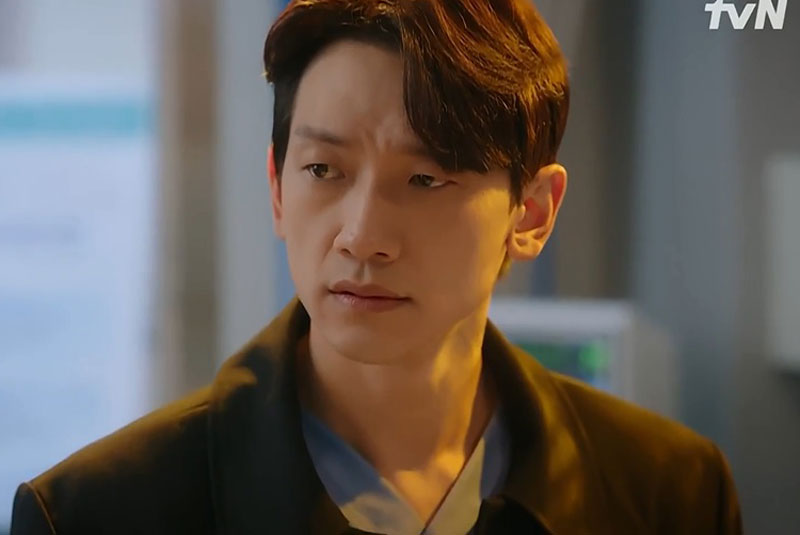 Note: From here on out there are specific plot spoilers for K-Drama Ghost Doctor: Episode 2.

Young-Min arrives at the dating place but Se-Jin isn’t there. He sits on the bench to wait for her. He sees her showing up with smiling and waving to him. But it’s just his illusion. He touches the place where she sat. Sun-Ho calls Young-Min and reports to him that something bad happened to Kwang-Deok.

Sun-Ho tells Tae-Sik that Kwang-Deok needs surgery. Tae-Sik gets Sun-Ho to call Young-Min. Jae-Won hears the talk and calls Seung-Tak. He asks him about the task he asked him to do. But Seung-Tak tells Jae-Won that he’s busy because there’re two patients sent to the hospital.

Soo-Jung finds out that the patient is Young-Min. She sends him to the emergency room. Jae-Won climbs runs and climbs the stairs, arriving at the Nurse Station. He hands over Kwang-Deok’s blood to the nurse and asks her to test the blood.

Young-Min doesn’t know what to do when he stares at his heart. Soo-Jung wakes him up. He completes the surgery. Young-Min tries to get into his body. But he gets kicked out. Se-Jin waits outside. The doctor tells her that nobody can operate on him after he had a traffic accident.

Se-Jin runs to the emergency room and sees Young-Min lying on the operating table. She tears up. Young-Min sees Se-Jin as well. He tries to reach her but he passes out. Tae-Hyun shows up. The doctor tells Tae-Hyun that Seung-Tak just operated on Young-Min. Tae-Hyun is furious to push Seung-Tak over. He saves Young-Min’s life.

Young-Min runs into the ward and thinks he will be fine since the one who treated him was Tae-Hyun. But Tae-Hyun tells Soo-Jung that Young-Min won’t wake up. Young-Min doesn’t believe it. He tries to get into his body. But the body doesn’t accept him. He cries. Tae-Hyun thinks Seung-Tak should take the duty for Young-Min because he operated on him.

Seung-Tak sits on the bench to think about the surgery. Jae-Won runs to join him. He feels happy for him because he just completed his first surgery. But Seung-Tak tells Jae-Won that he cannot remember what he did. Jae-Won thinks Seung-Tak was used by ghost doctor.

Soo-Jung remembers Seung-Tak rotate his wrists before he began the surgery. She stares at him and walks to him after he showed up. She asks him for an explanation. He laughs and tells her that he’s actually a talented doctor but he didn’t show his true side to her.

Seung-Tak asks Soo-Jung for keeping the secret for him. She agrees to it since he saved Young-Min. But she still doesn’t believe what he said. She walks away. Young-Min watches himself in the ward. He finds out that the connectors don’t connect.

Young-Min throws a fit. But nobody replies him because he’s a soul. He remembers he got into Seung-Tak’s body. He wants to do same thing to the doctor. But Ms. Kim stops him and connects the connectors. She takes a look at him and leaves the ward.

Se-Jin wants to get into the ward to see Kwang-Deok. But she’s stopped by Min-Ho. She tells him that she will do something if he didn’t show her the medical record of her father. She walks away. Young-Min follows him. She sits on the bench and begins to cry. He blames her for breaking up with him. But he still wants to do something for her.

Young-Min tries to get into Jae-Won’s body to check the medical record of Kwang-Deok. But he fails. Tess tells Young-Min that he failed because he’s not dead. Tae-Hyun calls Jae-Won to outside. Jae-Won confesses that he told Seung-Tak to inject the medicine to Kwang-Deok.

Young-Min is furious to run to Seung-Tak. He gets into his body by mistake. Young-Min throws away the lollipop Seung-Tak just ate. He’s rude to Tae-Hyun and treats the patient. Young-Min runs to Tess and asks him for teaching him to leave Seung-Tak’s body. Tess teaches it to Young-Min.

Young-Min feels happy after she left Seung-Tak’s body. But he’s told that he won’t wake up if he continues to do that. Seung-Tak sneaks into the ward and wants to take a look at the patient he just treated. Soo-Jung tells Seung-Tak that the patient is fine after he treated him. She asks him to get a cup of coffee for her.

Jae-Won rushes to Seung-Tak when he’s waiting for the coffee. He tells him that Kwang-Deok is in a coma after they saw Kwang-Deok. Young-Min goes to see Kwang-Deok. But he gets hit by Kwang-Deok’s soul. Young-Min tells Kwang-Deok that the one who hurt him wasn’t him. He yells at him that he’s a ghost as well.

But Kwang-Deok doesn’t believe what Young-Min said. He thinks he failed in his duty as a doctor. Because he left when he didn’t wake up. Min-Ho shows up. He tells Kwang-Deok that he wouldn’t do that if he trusted him. He walks away.

Young-Min follows Min-Ho to the rooftop. He sees Seung-Won. Seung-Won thinks they will have a problem if Young-Min wakes up. So he needs to do something to Young-Min. Seung-Tak remembers Jae-Won told him to inject medicine for Kwang-Deok when he gets off the elevator. Seung-Won takes away the coffee from Seung-Tak before it hurts him. He tells him that he will get Tae-Sik to replace him treating Young-Min. He walks away.

Young-Min follows Seung-Tak to get into the office. He thinks he did it for getting promoted. So he yells at him. Seung-Tak gets a call from someone. He turns over the coffee and runs away after knowing something happened to Young-Min. Young-Min runs to follow Seung-Tak and gets into his body.