This is the recap for K-Drama Melancholia: Episode 1. Hye-Mi arrives at the Asung High School to attend the ceremony. The girl greets Hye-Mi. Hye-Mi greets the girl back. She walks in the hall. Jung-A shows up and gives a speech. She tells people that they cannot succeed even if they work hard. 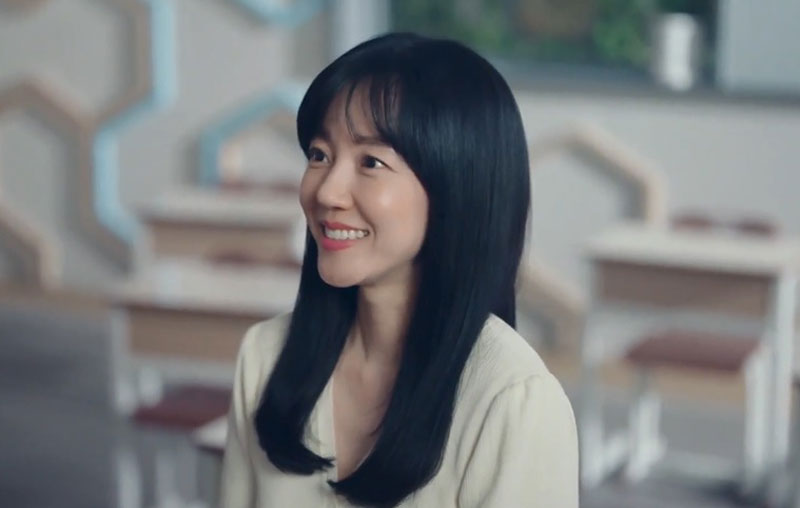 Note: From here on out there are specific plot spoilers for K-Drama Melancholia: Episode 1.

But Yoon-Su scolds Jung-A for giving the wrong message to people. She tells everyone who sits in the hall to believe in justice. She wishes the students to remember her words even if she knows their parents will ignore it. Jung-A gets the police to arrest Yoon-Su.

Seung-Yoo arrives at Asung High School when the police is going to take his teacher away. He tells Yoon-Su that he will prove her innocence. She gets into the police car. Jung-A is summoned to the police station. She tells the police officer that Yoon-Su is a great teacher. She adds that she couldn’t conceal her secret. She reveals Seung-Yoo’s mom Hee-Seung broke into the office and gave Yoon-Su a slap. Jung-A tells the police officer that Yoon-Su fell for Seung-Yoo. He throws Seung-Yoo’s resume to the table. She asks Yoon-Su if she did it to Seung-Yoo.

Seung-Yoo sees the man who rides motorcycle hitting a woman, and he rides the motorcycle away after he made the woman trip. The guy reports it to the police. But he cannot remember the number on the plate. Seung-Yoo tells the number to the guy.

Hye-Mi arrives at the hotel. She sees the gifts. She gives some cashes to the guy, asking him not to mix her gift up with those gifts. Sun-A asks Hee-Seung to stand up. She reveals the seat belongs to someone. She greets Hye-Mi when the woman shows up.

Hye-Mi takes off her sunglasses and recognizes Hee-Seung. She tells her that she cannot sit there according to her son’s degree. Hee-Seung has to walk to her seat when other women mock her. Hee-Seung calls Min-Sik when he’s wiping the trophy at home. He asks her not to hang up.

Jung-A shows up with her daughter Ji-Na. Hye-Mi asks Jung-A for giving a speech after she reminded the parents that it’s Jung-A’s birthday. Jung-A tells people that the school is going to take part in the credit system. Seung-Yoo visits the temple. He gets a call from his dad Min-Sik. But he doesn’t pick up his phone.

Seung-Yoo walks outside. He takes out a camera and takes some photos. Jung-A tells the parents that they’re going to hire a skilled math teacher. Yoon-Su texts Sung-Jae that she’s going to arrive. But someone bumps her and the stone drops. She picks up the stone.

Yoon-Su gets on the train. She finds her seat. She has a seat. Seung-Yoo gets on the same train. He has a seat and puts his camera into the bag. The man puts his head on Yoon-Su’s shoulder when he falls asleep. She pushes his head away. She sees the little girl who sits in front of her. She knows her age.

Yoon-Su puts the book in front of her. She ties her hair and she takes out her phone. Seung-Yoo goes to the restroom. He’s going to wash hands. He gets a message from Yoon-Su who asks him what the bear’s color is. He tells her that it’s white after he drew something on the mirror. He leaves the restroom when the kid wants to use the restroom.

The man puts his head on Yoon-Su again. She leaves her seat and joins Seung-Yoo. She takes out of stone from her bag and stares at it. But she trips when the train passes the tunnel. Seung-Yoo helps Yoon-Su with his arm. The two have an eye contact. Their bags fall to the floor.

Yoon-Su greets Seung-Yoo and sees the number on his cap. The train stops. Yoon-Su realizes that she doesn’t take her luggage. So she gets back to her seat. Seung-Yoo sees her bag. He takes her bag and returns it to her when she’s taking her luggage. He walks away.

Yoon-Su gets in Sung-Jae’s car. He explains that he didn’t pick her up because he was busy. But she tells him that she prefers to take the train. He agrees to what she said, telling her that she’s pretty. He tries to kiss her but he’s stopped by the seat belt.

Sung-Jae takes Yoon-Su to their new house. She’s not happy because the furniture was done by his parents. Because she wants to put something she likes in the house. He comforts her that she can do it in the cupboard because it’s empty. She has to agree to it.

Seung-Yoo finds the camera in her bag. She realizes that she took the wrong bag. She remembers the bag was given by Seung-Yoo. Seung-Yoo returns home. He gets scolded by Min-Sik who asks him where he went. Seung-Yoo tells his father that he went to take part in the death anniversary.

Seung-Yoo tries to return to his room. But Min-Sik stops Seung-Yoo because he wants to have a talk with his son. Seung-Yoo sits on the couch. Min-Sik tells Seung-Yoo to do the thing. Sung-Jae takes a look at the photos Seung-Yoo left. He finds out that the photos are terrible.

Yoon-Su is interested in those photos. Seung-Yoo hangs his cap on the door. Melancholia: Episode 1 lets us see that there’re several caps there. Seung-Yoo opens his bag. He doesn’t find the camera inside the bag. He remembers he gave his bag to Yoon-Su.