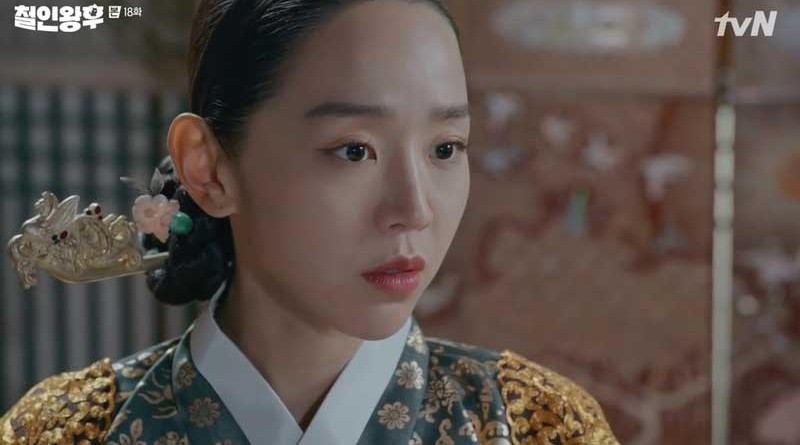 This is the recap for Korean drama Mr. Queen: Episode 18. King rides away with his troops. So-Yong runs out of the palace and calls him. But he ignores her. She is confused and asks Lady Choi if King visited her. Lady Choi admits it and comforts So-Yong that King will get back. 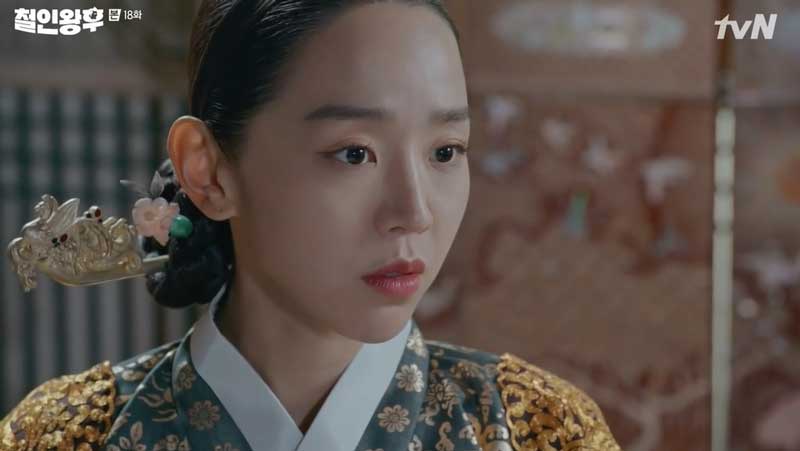 Note: From here on out there are specific plot spoilers for Mr. Queen: Episode 18.

Queen Sunwon stands in front of the throne and asks about So-Yong. Byeong-In tells him that So-Yong is against King for her child. Queen Sunwon thinks she should take So-Yong’s side. She smiles when she stares at the throne.

Byeong-In fights with King. They hurt each other. King kicks away Byeong-In’s sword and flees. Byeong-In chases King. His followers join him. King’s arm is bleeding when he runs. He arrives at the cliff. He turns around when Byeong-In walks to him. Byeong-In tells King to surrender. But King chooses to jump off the cliff. Byeong-In takes a look at the place under the cliff. He finds out that it’s sea.

So-Yong is upset. Byeong-In visits her and tells her that King is fine. But she spots the blood on his shoulder. He covers the blood with his palm. She worries about him. He explains that he was hurt when he practiced, and asks him to join his clan. She rejects it. He tells her that he will take her side when she needs him. He walks away.

The bodyguard looks for King. He finds the clothes of King. So-Yong is writing the letter to her child. She asks him if he thinks of his father. The baby kicks her. She feels happy because she thinks her baby is a talented person. Lady Choi shows up and gets So-Yong to drink up the soup.

Lady Choi breaks into the room and tells So-Yong that King passed away. Hwa-Jin gets the message as well. She is furious to put down her brush. Chief Eunuch stands on the rooftop. He calls King and throws away King’s clothes. Queen Sunwon tells Byeong-In that she wants to get someone to replace King. He tells her that he will stop King if he gets back.

Queen Sunwon feels happy after knowing Byeong-In’s plan. She asks him if So-Yong will unite with them. He tells her that he will make So-Yong do that. So-Yong is furious to throw away the book. But she finds the words King wrote to her baby. She tears up when she’s reading.

Prince Youngpyeong puts his sword on So-Yong’s neck. He claims that he wants to kill her because he believes that she and Byeong-In murdered King. She closes her eyes when she hugs her belly. Lady Choi begs Prince Youngpyeong not to do that because the baby inside So-Yong’s belly belongs to King. He has no way but throws away his sword. He’s taken away by the bodyguards.

Byeong-In tells So-Yong to be a friend of Queen Sunwon. But she remembers the wound on his shoulder. She goes to check the body’s King. She finds out that it’s someone else. She stays in the palace and wonders why Byeong-In did that. But Lady Choi and Hong Yeon keep crying. So-Yong cannot think about it. So she tells her maids that King isn’t dead.

So-Yong packs her stuff and decides to flee. But Byeong-In spots her. He tells her that she will be hurt if she goes outside. But she tells him that she knows that he hurt King. He tells her to surrender because King passed away. She laughs and thinks King is fine.

So-Yong intends to shoot Byeong-In. It hurts him deeply. He blames her for doing that, and confesses his feelings to her. She tells him that So-Yong disappeared, and shoots the ground. She tells him that she can do the thing which So-Yong couldn’t do. But he still goes forward. So she shoots his leg. He breaks off the arrow and grabs it tightly.

So-Yong jumps off the wall. Lady Choi and Hong Yeon applaud. The two ask So-Yong to let them join her. But she tells them to go home. Hong Yeon tells So-Yong to step on her if she wants to leave alone. So-Yong steps on Hong Yeon’s foot. Hong Yeon yells because of the pain.

King wakes up and finds the letter from the drawer. But someone lifts the stick and tries to beat him. So-Yong and her maids walk around the woods. But the bodyguard finds them. Lady Choi tells Hong Yeon to protect So-Yong. She rushes to hug the bodyguard so that he cannot reach So-Yong.