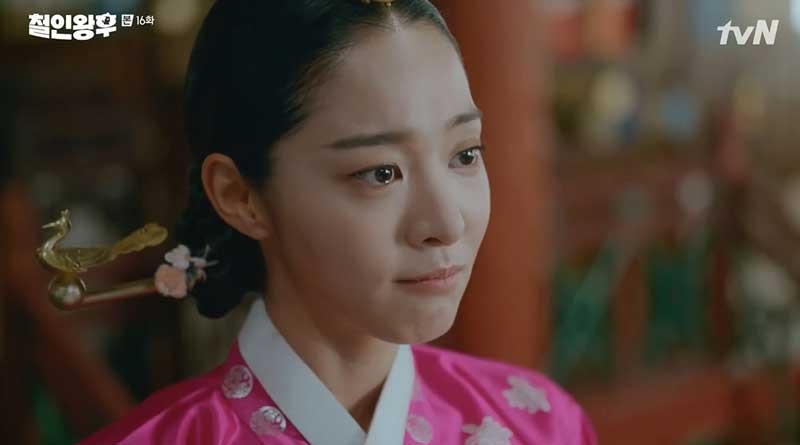 This is the recap for Korean drama Mr. Queen: Episode 16. So-Yong stops King from touching the book. He asks her if she helped him from the well. She admits it and complains that he didn’t remember it. She says that her arms were hurt when she took him out of the well. But he points out what he means isn’t this time. 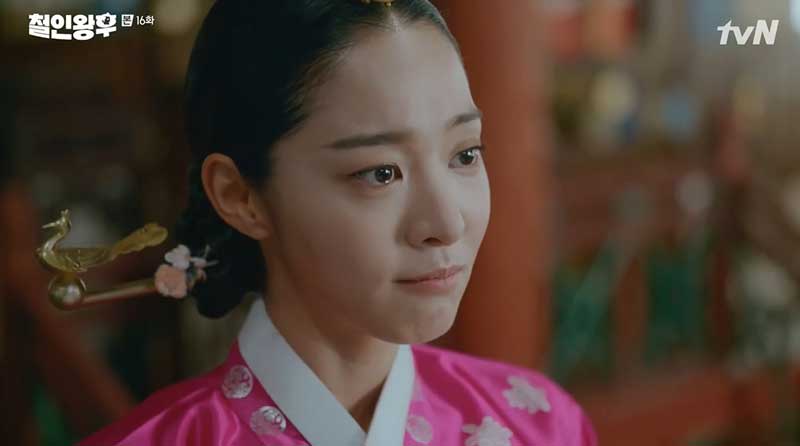 Note: From here on out there are specific plot spoilers for Mr. Queen: Episode 16.

King asks So-Yong why she treats the book like a treasure. She says something he cannot understand. He reveals he missed her when he was in the well. But he spots her trying to eat the noodles. She explains that the noodles will go bad if she doesn’t eat it.

So-Yong notes that King is reading the book. She asks him about it. He tells her that it’s a martial arts book. He says that he wants to get trained to be a good king. She tells him not to work hard, and thinks he will be victory if he chooses her. He laughs and doesn’t believe in what she said. She tells him that she comes from future, and teaches him what she knows to him.

Sal-Soo reports what So-Yong did to Jwa-Geun. Jwa-Geun praises Sal-Soo and gives him some money. Kim Hwan joins Byeong-In and thinks they should be nice to King because he thinks King is a good person. But Byeong-In doesn’t think so. Kim Hwan tells Byeong-In that So-Yong slept over in King’s palace.

So-Yong stares at King when he falls asleep. She thinks her fate will be changed if she changes his fate. He wakes up and wants to kiss her. But Lady Choi shows up and interrupts them. She tells So-Yong that her dad is sick. So-Yong goes to see Moon-Geun. He tells her not to leave because she worries that she will get hurt.

Moon-Geun feels guilty for sending So-Yong to carry the poison. But she tells him that he didn’t do anything wrong. He tells her that he feels good now, and reveals her mother wished her to be happy. She tells him that she wants to take revenge, and asks him to do something.

So-Yong tells Moon-Geun to give his foods to people for earning reputation. She gets King to release people. Byeong-In is against it. He reports to Queen Sunwon what King did. He asks her if she still gets angry for what King and So-Yong. She says yes.

So-Yong meets with the ministers and tells them not to be against King when he gives out the orders. She warns them that she will do something bad to them if they do that. Byeong-In meets with Daebi Jo and wants to deal with King with her. She agrees to it because she hates King as well. But the follower tells a message to Byeong-In. Byeong-In is shocked.

Hong Yeon tells So-Yong about the novel “The World of the Married”. It makes Lady Choi get angry. Byeong-In shows up and asks So-Yong why she gave up Kim clan. She points out that Kim clan wants to kill her. She tells him that she doesn’t want to use his love anymore. She tries to leave. He stops her and asks her why she chose King. She tells him that it’s not related to King. She adds that she doesn’t love him.

Byeong-In is in tears and tells So-Yong not to give up him. He tells her that she is his world. But she ignores him and walks away.

Hwa-Jin visits King and wants to leave since he doesn’t have any thing to say to her. He stops her and tells her that he fell for her after she saved him from the well. Prince Youngpyeong shows up. Hwa-Jin has to leave. She remembers what he said to her, and wonders why he knew the truth. So she goes to see King. But she sees King falling asleep with So-Yong.

Hwa-Jin is in tear and thinks King doesn’t like her anymore. He tells her that he just didn’t want to hurt her. She tells him that she handed over the ledger to Queen Sunwon because she dislikes So-Yong. King is shocked and blames Hwa-Jin for doing so. He thinks she ruined his dream. She confesses that she felt uncomfortable when he was obsessed by So-Yong.

King gives the book to So-Yong. He feels sorry for not recognizing her. She comforts him that she wasn’t honest as well. He wonders what she did these days. It makes her laugh.

Lady Choi goes out to see Man-Bok. She tells him that she came to badmouth So-Yong. He teaches her how to release her temper in the right way after seeing her anger.

The wine comes out. So-Yong shares the wine with her maids and Man-Bok. But she wants to vomit when she smells the it. She doesn’t put it into her mind. King gives the books he wrote to So-Yong. She praises him. He catches the chance to kiss her. But she vomits.