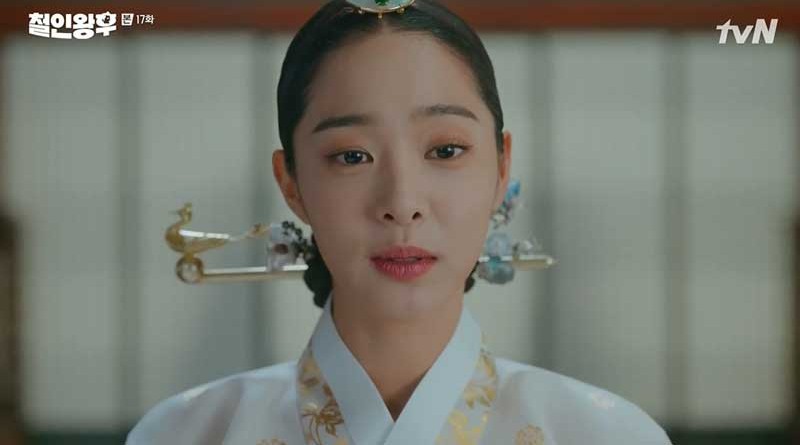 This is the recap for Korean drama Mr. Queen: Episode 17. The doctor tells King that So-Yong has a baby. King feels happy and hugs So-Yong. She is shocked when everyone dances. She is furious to stop then, and kicks them out. She throws a tissue to King and closes the door. He wonders why she wasn’t happy. 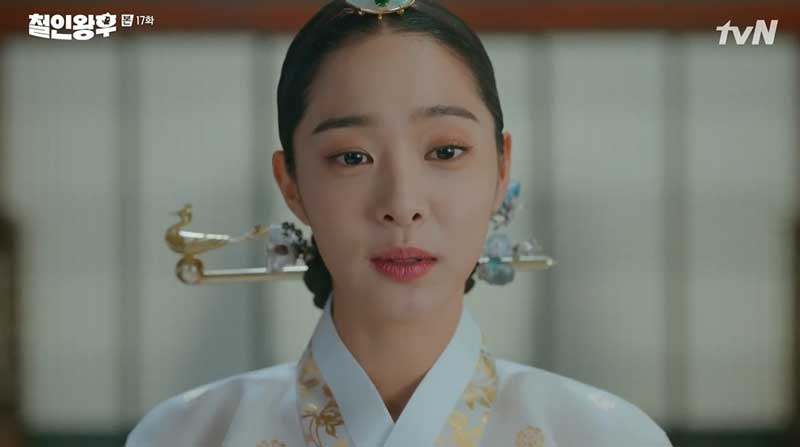 Note: From here on out there are specific plot spoilers for Mr. Queen: Episode 17.

Lady Choi explains that So-Yong did that for telling King that she feels good. So-Yong complains to the heaven and tells him that she doesn’t want to have a baby. Hwa-Jin is furious to break into Daebi Jo’s room, and tells her not to force her to do things. Daebi Jo thinks Hwa-Jin has to do that because she is her bird.

Byeong-In is furious to cut off the painting after knowing the news of So-Yong. Chief Eunuch gets a tea for King and tells him to do something to comfort So-Yong. King asks Chief Eunuch how to achieve that. But Chief Eunuch doesn’t know about it.

Daebi Jo and Queen Sunwon visit So-Yong. So-Yong explains that she cannot move so that she didn’t tell the news to them. She wants to get up to greet the two. They stop her and tell her to be careful. She wants to vomit and gets Hong Yeon to bring a big pot to her. She vomits in the pot.

Hwa-Jin draws a grass. Prince Youngpyeong visits her. She knows that he worries about her, and tells him that she is fine. She reveals she went to the palace because she wanted to aid King. But she realized So-Yong is better than her. She visits Man-Hong and tells him not to hurt So-Yong.

Sal-Soo reports to Jwa-Geun that Byeong-In didn’t meet with So-Yong. Jwa-Geun runs into Byeong-In and tells him to take a break at home. So-Yong goes to the kitchen to look for wine. But she finds out that the wine is missing. She yells and blames Man-Bok. He shows up and tells her that he threw out the wine.

So-Yong doesn’t believe in what Man-Bok said, and throws him away. She spots the drunk Lady Choi. Lady Choi smiles at So-Yong. So-Yong is furious to shake Lady Choi. She tells her to return the wine to her. But she is stopped by Man-Bok. So-Yong cries. Hong Yeon comforts her master.

So-Yong walks out of the palace. She runs into King who is riding a horse. He invites her to ride the horse with him. Lady Choi cries and tells So-Yong not to do that with King. But So-Yong is furious to jump on the horse. King joins her. Lady Choi cries to chase So-Yong but she trips.

King walks So-Yong and tells her that he will give her what she likes. She thrills and mistakes that it’s nightlife. But he tells her that it’s just freedom. She feels disappointed. He intends to return the palace since she doesn’t like his plan. But she stops him. She says that she wants to take a look at the house.

So-Yong walks into the house and likes the place instantly. King tells her that he doesn’t know why she wasn’t happy being a mom, and thinks she has her reason. She smiles. He catches the chance to hold her hand, and tries to make her lean on his should. But she feels uncomfortable, and walks away.

King tells So-Yong that he will give his throne to their child. He touches her belly. She realizes that her baby will rule the world, and decides to teach him about it. Daebi Jo spreads the rumor that the baby in So-Yong doesn’t belong to King. King meets with So-Yong and tells her that she will get fired if the rumor comes true. She hugs him and shows it to people.

Hwa-Jin visits Daebi Jo and asks her if the rumor was made by her. Daebi Jo admits it and tells Hwa-Jin that she cannot control it. Hwa-Jin tells Daebi Jo that she will tell people what kind of queen she is. Daebi Jo is furious. But she cannot stop Hwa-Jin.

Hwa-Jin meets with So-Yong and asks her if she thinks she will defeat the enemies. So-Yong tells Hwa-Jin that she has to be victory. Hwa-Jin gives the bow and arrows to So-Yong, and tells her to get trained on her own. So-Yong asks Hwa-Jin to instruct her. But Hwa-Jin rejects it.

Hwa-Jin visits King and asks him to fire her. He rejects it. She points out that they don’t have feelings for each other. He has to do what she told him. Prince Youngpyeong visits Hwa-Jin. He says that he doesn’t believe King would do that on her. She tells him that she got King to do so, and thinks she will only hurt King if she stays there.

Queen Sunwon reminds Byeong-In that he needs to do something for his clan. She tells him to kill So-Yong because people believe the baby in So-Yong’s belly belongs to him. He tears up and tells Queen Sunwon that he cannot do that. So she threatens to get someone else to do that. He has to accept the order. It makes her smile.

King returns to the palace. He pulls out his sword and points it at the guy after he found out that someone is in his house. He finds out the guy is Byeong-In. Byeong-In walks to King and tells him that he knows he contacted Donghak believers in his book. King pushes Byeong-In to the wall, and wants to kill him. He asks him why he didn’t report him. Byeong-In says that he did it for So-Yong.