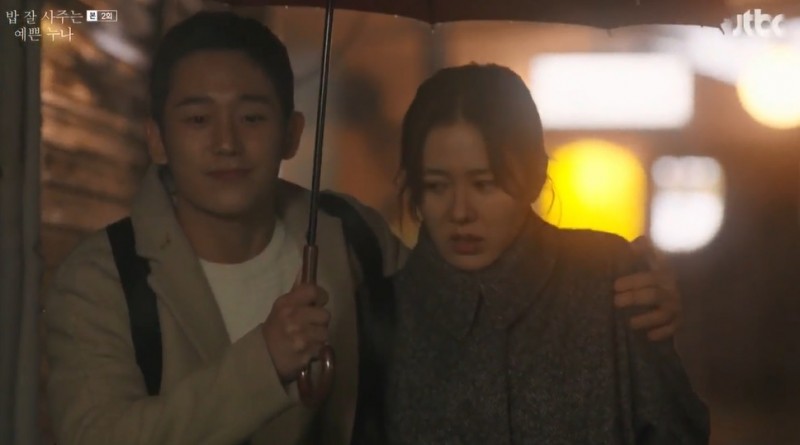 This is second episode of Pretty Noona Who Buys Me Food Korean Drama, Kyu Min wants to make it up with Jin Ah after he was dumped. Kyung Sun and Joon Hee is against it, but Jin Ah’s parents ask Kyu Min to have dinner and discuss their marriage at home. 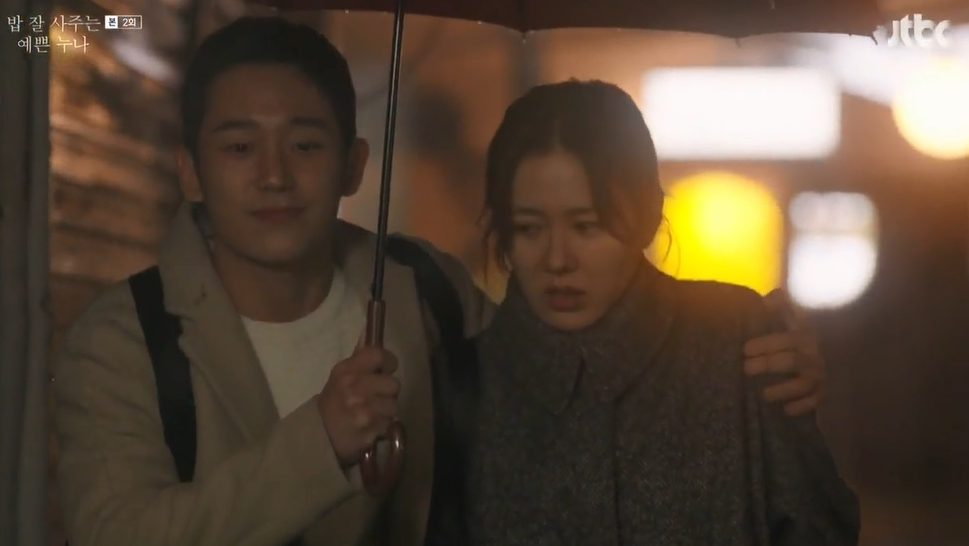 Joon Hee calls her from outside when Jin Ah is dancing, she is scared and asks why he is here. He tells her that he heard there is a new club here, but it doesn’t look good. Jin Ah hits and chases him in the office. Just then Ye Eun is back and tells her that Deputy Gong did disgusting on her at the bar, Joon Hee has to hide under the desk and hears what they said.

Jin Ah persuades Ye Eun to forget what happened and sends her home, but Ye Eun locks the door after they left. Jin Ah has to run back and open it after seeing Ye Eun off. She looks for Joon Hee in the office, he is lying in couch and waiting for her, thinking she came here by climbing, although he saw she ran at street.

Kyung Sun runs into Joon Hee outside in the morning and asks if he just plays around, he claims he stay up all night at office. She doesn’t believe what he said and thinks his little brother has a woman, claiming that he will die if the woman is brainless and impolite.

Deputy Gong scolds Jin Ah, Bo Ra and Se Young for absence company dinner, Bo Ra thinks she doesn’t have any energy to eat with boss since they are busy working outside, when walks Jin Ah and Bo Ra. Then they run into Joon Hee and Seung Cheol while eating out.

Se Young wants to handle Kyung Sun’s store after she knew she is Joon Hee’s sister, but Jin Ah rejects it and thinks her friend will feel upset. Mi Yeon asks Sang Ki to invite Kyu Min to discuss marriage and marry off Jin Ah after attending her friend’s wedding.

Kyu Min takes Jin Ah to the restaurant which he ate with another lady, this make Jin Ah upset and tells Kyung Sun about it, Kyung Sun thinks she should pour water to his face and leaves. Joon Hee gets irritated and thinks she shouldn’t give him any chance when driving Kyung Sun.

Jin Ah thinks Kyu Min shouldn’t take her to the restaurant he ate with other girls if he wants to make it up with her. He thinks she cheated on him and mentions the guy he saw in front of her office, Jin Ah sneers and asks him if he doesn’t have cash to pay parking fee.

Joon Hee runs into Jin Ah and Se Young outside elevator, he offers to have lunch with Se Young at pizza restaurant, she accepts it. But Jin Ah doesn’t give him answer when he asks her. Chief warns to fire Jin Ah and others after he knows the store in Gasan is closed, and asks them to arrive at the store in 30 minutes.

Se Young feels sorry and asks Joon Hee to cancel the appointment while she is in his way. Ho Gyun claims to pay lipstick and coupon fees after Yeong In wants to report Jin Ah’s case to chief. Jin Ah leaves a note on the store owner’s door and tells him that avoiding cannot solve problem.

Jin Ah is upset when Joon Hee thinks she still stays with Kyu Min, asking him that if Kyung Sun told him. He denies and reveals he heard that they were passionate while is in relationship. She thinks he mocks her according his speech. He apologizes to her and thinks she is pretty when Jin Ah asks him if man loves pretty woman.

Joon Hee goes to store buying a red umbrella when she wants to call taxi while raining, and asks her to come to him when she fears to be hit by rain. Jin Ah asks why he only bought one umbrella, he thinks it’s waste and hugs her shoulder walking in the rain.

Se Young tells Jin Ah that Joon Hee asks her for meal and thinks she shouldn’t eat a lot for lunch. Jin Ah asks Ye Eun, which one should she chooses, man’s words or behavior? Ye Eun thinks both are lies and reveals they can say anything when seducing a woman.

Jin Ah arrives home after knowing Kyu Min is visiting her parents. Seung Ho asks Joon Hee to end the relationship with Jin Ah after knowing he is dating his sister and reveals he will have a hard time if he does it. Meanwhile, Jin Ah wears sexy and asks what Kyu Min thinks, when he is eating with her parents, and reveals he likes young lady.

Mi Yeon realizes he betrayed her daughter, Sang Ki presses Kyu Min on desk and hits him after knowing he cheated on his daughter. Kyu Min points out Jin Ah cheated on him also and points Joon Hee. Joon Hee takes Kyu Min when seeing him grasps Jin Ah’s hand.