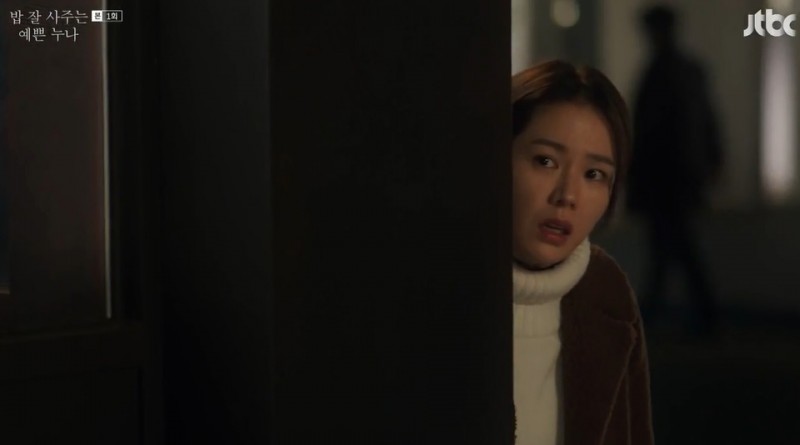 This is first episode of Pretty Noona Who Buys Me Food Korean Drama, Jin Ah runs into Joon Hee at street after she is dumped by Kyu Min who is a two timer. He asks her to treat him and knows her ex calls her konjac. 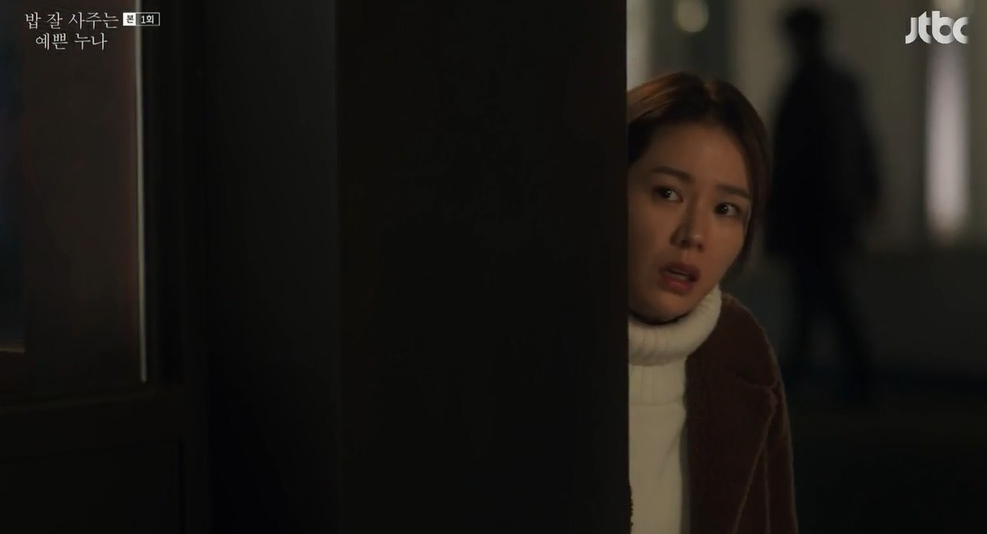 Note: From here on out there are specific plot spoilers for Pretty Noona Who Buys Me Food episode 1.

Jin Ah tells Kyung Sun that Kyu Min wants to see her, Kyung Sun thinks she is scared and encourages her. Jin Ah looks at her shoes and orders some clothes, asking installment while paying. Jin Ah asks Kyu Min why he doesn’t like her anymore because he is silent while she mentions the places she wants to travel with him.

He thinks their relationship is like a konjac, although she found many reasons that he wants to break up with her. Kyu Min asks Jin Ah cash to pay parking fee for him, she scolds him that he should bring cash since they are end. Kyung Sun tells Jin Ah not to give in and thinks she only wasted money on clothes. Jin Ah tells her that she googled konjac, Kyung Sun sneers at her and reveals people want to try fresh stuff. Jin Ah reveals a college student waited her at her house, he just wanted to get her number.

Mi Yeon asks Jin Ah to take Kyu Min having meal weekend and complains she keeps on making hangover soup for her, Jin Ah accepts it, but she doesn’t drink the hangover soup. Sang Ki asks to drive Jin Ah to office, but she lets him drive her next time.

Representative Kim discovered a worker wears earrings and uses phone during working and asks who is the store’s supervisor. Se Young claims it’s her store and wants to fix it, Jin Ah wants to help her and thinks the owner is hard to deal with. But Se Young doesn’t want to thank her, even if she helped her.

Jin Ah runs into Joon Hee while he is biking. She thinks she saw wrong person in the beginning and asks him when he returned, while he stands in front of her. Jin Ah laughs and chases him when he replies that when she was sleeping. She thinks he should tell Kyung Sun since she worries him, Joon Hee doesn’t want to bother his sister and asks about Jin Ah’s love. She reveals it’s processing and vomits when he mentions konjac.

Joon Hee takes Jin Ah to walk a shortcut, a couple runs away when sees them. She is shocked that how he knows the shortcut, he reveals Seung Ho kissed a girl at there and thinks she shouldn’t act cute in his current age when Jin Ah wants to reports it to mom. She claims most of time she isn’t at office when he wants her to treat him during she is in office.

Mi Yeon asks Jin Ah what ingredients Kyu Min likes and thinks her daughter should catch him as her friends are worship her for becoming an in-law of attorney. But Jin Ah claims she wants to wash up and sleep, Mi Yeon has to leave.

Joon Hee texts Jin Ah and thinks her taste too old after seeing her with Cheol Goo. Then Cheol Goo thinks she should gets marry and lets her share foods while eating. Kyung Sun tells Jin Ah that Kyu Min is a two timer and shows photos he dated another lady.

Jin Ah leaves lipstick and socks in Kyu Min’s car, the lady breaks up with him after seeing the lipstick and socks. Jin Ah tells Kyung Sun that she wants to get marry and thinks she is right that he doesn’t have ability to pick man. She hits Joon Hee when he mentions the konjac again.

Kyung Sun asks Joon Hee to drive Jin Ah with slow speed, because she is drunk. He lets her take a break on the road after seeing her tearing up in the car, taking a photo of her then. Jin Ah asks to check his phone after noticing it, but he refuses and thinks nobody wants to see her drooling. She warns to put him into jail if he spreads her photos.

Joon Hee holds Jin Ah’s hand and drives Kyu Min away when he argues with her, pretending to call police and reports Kyu Min as stalker. She thinks she is embarrassed to ask her best friend’s brother to help her, But he thinks Jin Ah is luck, otherwise she has to spend rest life with Kyu Min.

Seung Cheol asks Joon Hee to introduce him to Jin Ah and reveals he is interested in Se Young, Se Young asks Jin Ah to introduce her to Joon Hee as well. The director harasses Jin Ah while drinking, but she is silent. Se Young thinks she gets pay for doing it.

Cheol Goo asks to sing with Jin Ah, but she claims she needs to deal with her document when he thinks she is single. Jin Ah runs into Joon Hee in the hall and leaves with say goodbye, when he flirts with other girls while calling. He finds out she is dancing in the office while he returns.