In the 3th episode of Pretty Noona Who Buys Me Food Korean Drama, Jin Ah ends the relationship with Kyu Min, but he doesn’t want to give up. She has the feeling with Joon Hee, but she doesn’t move until Joon Hee confessed his love. 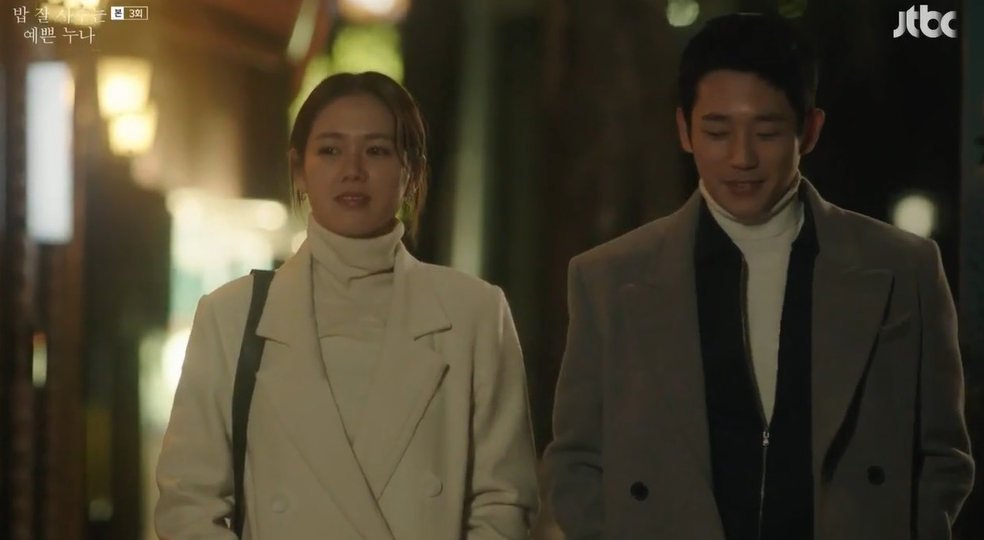 Seung Ho asks what happened and introduces Joon Hee as his friend to Kyu Min, but he lets him get lost after knowing he cheated on Jin Ah. Joon Hee lets Seung Ho mind his business when he asks about Joon Hee and Jin Ah’s relationship. Jin Ah reveals she asked Joon Hee to pretend to be her boyfriend stopping Kyu Min from chasing her. Sang Ki thanks to Joon Hee for what he did. Seung Hoo thinks it’s humiliating that her older sister was cheated at this age.

Mi Yeon scolds Jin Ah that why she asked Joon Hee to pretend her boyfriend since he is her younger brother’s friend, and thinks Kyu Min wouldn’t cheat on her if she treated him well, revealing other daughter of her friends got marry easily. Jin Ah thinks she is dumb and drives Mi Yeon mad, Sang Ki takes his wife away.

Kyung Sun thinks Joon Hee had a fight when she goes to his room take beer and see his exhausting. Mi Yeon has a fight with Sang Ki while lying in bed, and thinks Kyu Min wouldn’t break up with their daughter if her husband is in high position.

Seung Ho reveals Joon Hee almost hit Kyu Min and thinks she should find a appropriate to pretend to be her boyfriend when Jin Ah asks if they fought? Jin Ah visits Joon Hee’s house and tries to avoid Kyung Sun after he didn’t pick up his phone. But Kyung Sun opens the door and asks why she is here. Jin Ah claims she smells alcohol and takes a can of beer from her, then Kyung Sun takes her to her room.

Kyung Sun reveals Joon Hee goes somewhere after returning home with angry face and guesses he has a fight, but she cannot help him as his sister. Kyung Sun discover that Jin Ah doesn’t come here to drink, Jin Ah denies it and accepts it when Kyung Sun asks her to sleep in her room.

Jin Ah thanks to Joon Hee for what he did yesterday, but he is curious why she didn’t scold him for step in her life, revealing that he thinks she is going to make it up with Kyu Min since she dressed up so sexy. Jin Ah tells him that her parents invited him.

Se Young visits Kyung Sun’s shop and asks to have coffee with her, but Kyung Sun tells her to do it next time when Kyu Min visits her. Joon Hee asks Se Young to go club together after knowing Jin Ah is dating someone, then Se Young invites Bo Ra and Ye Eun.

Kyu Min tells Kyung Sun that Jin Ah has a boyfriend and reveals saw him at Jin Ah’s house, and he is Seung Ho’s friend. Kyung Sun asks if he is the guy who takes Jin Ah away in front of her office, Kyu Min admits it. Just then Jin Ah appears. Kyung Sun asks why she didn’t tell her that Joon Hee visited her, she reveals it’s because of Kyu Min and discovers that Joon Hee takes Se Young in the club after seeing the photos Ye Eun sent to her.

Kyu Min asks Joon Hee and Jin Ah’s parent apologize to him and thinks she isn’t from a wealthy family, she gives him a slap and asks him why he makes her treat him in such way. Meanwhile, Ye Eun tells Joon Hee that she told Jin Ah that he is in the club, but she didn’t reply. Joon Hee smiles and says that just leave her alone.

Jin Ah pushes Kyu Min to street after he claims he is going to commit suicide, he is scared and badmouth Joon Hee. She reveals it’s because of Joon Hee but her, asking Kyu Min to give up. He swears that he will get her one day. Se Young asks if Jin Ah made it up with his boyfriend, she reveals they are end. Ye Eun reveals Joon Hee let her leave Jin Ah alone when she wants to contact her.

Chief praises Jin Ah for Gasan’s case, Young In thinks it’s best to open the store so that both company and owner get the benefits from it. Director tells Jin Ah that he will cover the cost of new store for her while they run into outside elevator, Cheol Goo asks her to lower her head and thank to director.

Jin Ah thanks to Young In for her case, Young In thinks she just did what she should and lets Jin Ah to work. Jin Ah tells Kyung Sun that Se Young will take over her job and thinks she is a good woman when it comes to work. Kyung Sun thinks she might be jealous to Se Young and reveals it’s her mother’s anniversary when Jin Ah wants to treat her.

Kyung Sun tells Jin Ah that how she raised Joon Hee and thinks it’s joke when Kyu Min tells her that Jin Ah is in relationship with her little brother. Kyung Sun thinks Jin Ah and Kyu Min had a fight and reveals she visited his room last night after Joon Hee picked up her outside the market.

Joon Hee draws for Jin Ah after watching movie together, she thinks he drew her too small. But he thinks she is small and cute in reality. She thanks to him for his praising as people called her cute when she is 20. Joon Hee asks Jin Ah to keep his umbrella since she doesn’t want to throw it away.

Joon Hee’s colleague asks Jin Ah that what kind of man she likes, she reveals she likes nice person. They think Joon Hee is eliminate and reveal he is a bad guy who can get women he want. Joon Hee agrees, but he reveals there is one woman he doesn’t make her fall because he doesn’t ask her, even if they have the feelings. Just then Jin Ah holds his hand when Se Young thinks he isn’t in relationship with the woman.