In the 69-70th ending episodes of Story of Yanxi Palace Chinese Drama 2018 Recap, Consort Lin and Emperor defeat Empress, Yuan Chunwang and Hong Zhou on the end. She never forgets her older sister Ying Ning’s death, and takes her revenge. 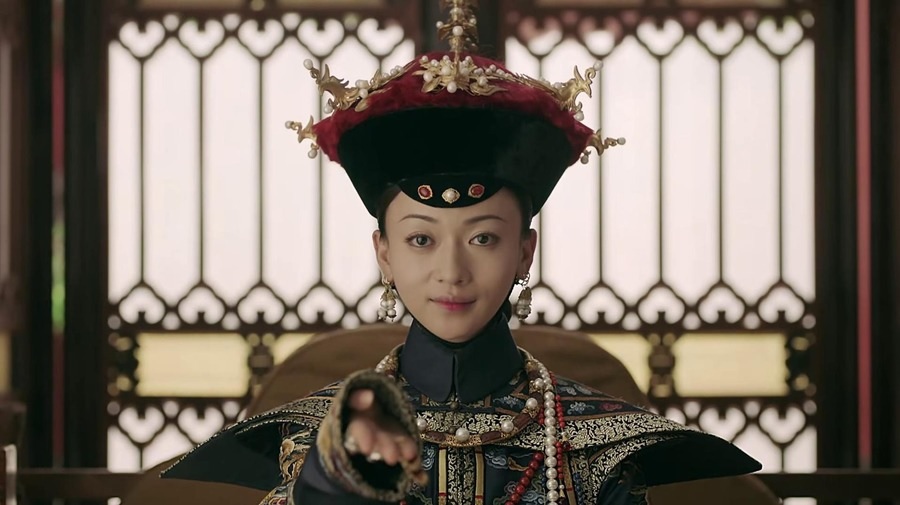 Note: From here on out there are specific plot spoilers for Story of Yanxi Palace Chinese Drama Recap: Ending Episodes 69-70.

Yuan Chunwang tells Empress that officers gave beauties to Emperor and reveals Hong Zhou wants to see her. She is furious that Emperor lost her face to sleep with the chicks. She suggests him to respect his status. But he ignores her and thrills to see the dancing. So she has to ask Consort Lin to persuade him. But Consort Lin thinks the dancing girls are pretty, and wants to take them home.

Emperor stops Consort Lin and thinks she will lose his face if she continues saying such words. Empress is furious and doesn’t expect Emperor anymore. Hong Zhou tells Empress not to be merciful. She says that she will obey his order since he always stands by her side. But she sends message outside through pigeon. Zhen Er tells Yuan Chunwang about Empress’s plan, and worries that their plan will fail since Empress has another plan. But he doesn’t think so and claims he will inform Hong Zhou to take action in advance.

Ye Tianshi tells the fifth prince that he can cure his leg, but he will get painful treatment and he cannot promise the success rate. The fifth prince wants to take the risk to try it because he doesn’t want to sit on the wheelchair all his life.

The water flows to Queen’s cabin, the fire keeps spreading. People on the ship are scared. Hong Zhou keeps Emperor in the cabin to burn him to death. Empress wants to save emperor, but is stunned by Hong Zhou. He leads his followers to kill the people who know truth.

Yuan Chunwang says Emperor isn’t there and asks Hong Zhou to host it. Emperor takes Queen to walk out of hidden path. Hong Zhou doesn’t expect Emperor has such way and pretends to be innocent. Emperor tells Hong Zhou that the path was designed by Fu Heng for preventing the accident.

He takes all of the sins to him. Empress claims she just pretended to promise Hong Zhou, and contacted ministers to save Emperor. She expected they would fail, so she sent message to ministers with pigeon.

Hong Zhou realizes that Empress utilized him. Just then Yuan Chunwang says Hong Zhou and Empress are in love, and she rebelled as well. He shows the jewelry Zhen Er stole from Empress, and wrongs her. His intention is to ruin palace. Zhen Er and Empress realize that they were betrayed, but it’s too late. Zhen Er takes all the sins to herself, but Emperor doesn’t trust Empress. Empress is disappointed because she betrayed Hong Zhou was to tell Emperor that she wouldn’t betray him.

Yuan Chunwang tells Empress that Hong Zhou wants to get the chance to see her. He adds that Emperor took two beauties to the ship, and tells her not to get angry. She tells Emperor that it will damage his reputation if he keeps the beauties, but he ignores her.

Consort Lin arrives, and Empress tells her to persuade Emperor. But Consort Lin tells Emperor that she likes the beauty. He thinks the beauty is match for the wine, and praises Consort Lin. Consort Lin mentions what saint said that foods and beauties are good things, and thinks people like beauties. She says that she will hug beauties if she is a man. Emperor talks back that Consort Lin is a woman.

Consort Lin says that she wants to get herself some handsome servants, and thinks it will help her eat well when she takes a look at them. She thinks De Sheng is very nice, and asks Emperor to give the servant to her. De Sheng tells Consort Lin not to make fun of him.

Consort Lin thanks the two, and says that she wants the servants who are good at talking and make her happy. Emperor scolds Consort Lin and stops the beauties from dancing. He warns Consort Lin that she would get him involved if the minister heard it.

The consort thinks what Emperor says is right, and tells Consort Lin to be careful while talking. Consort Lin wonders why it’s not allowed since she just puts some servants in her palace to watch. She thinks Emperor blinds her eyes as they’re going to arrive at the beauty place.

Hong Zhou tells Empress that he will be successful as he takes the duty of the south travel. He tells her not to hesitate, and thinks she should think about it for 12th prince. He tells her to trust him, and promises to help her. She smiles and thinks he always stands by her side. She adds that she remembers his grace and knows his feelings. Empress comforts Hong Zhou that she will listen to him.

Empress writes the letter and gets the pigeon to send the letter. The maid tells Yuan Chunwang that Empress has another plan. He smiles and thinks Empress has more ideas than other people. The maid asks Yuan Chunwang if the plan will be changed. He tells her not to worry about it as he will inform Hong Zhou to take action in advance.

Doctor Ye treats the prince and asks him if the leg has feelings. The prince says that it gets pain when the bad weather comes, and he can only walk with the cane. He asks him if his leg can be saved. Doctor Ye comforts the prince that his left leg wouldn’t have feelings if it was broken. But he needs to cut the bone and get rid of the carrion. So the bone will grow up.

Emperor asks Consort Lin is she is still in anger. She says that she worry about Yong Qi if Doctor Ye fails. He says that he knows Yong Qi than anybody as he is his son. He thinks he wants to be killed if he can only walk with the cane all his life.

Empress asks Emperor to be close to her. He knows he will be in danger, but he sends his followers to protect Consort Lin. Empress realizes that he never loves her, and thinks he is stupid. She tells him that she took most of ministers to her side after her father passed away, she could be next queen if Emperor died.

She says that she didn’t take action because she loved him, and cuts off her hair to end their relationship. Cutting off hair is a big sin, but she doesn’t care. Emperor asks his followers to take away Empress. Hong Zhou asks Emperor not to punish her.

Zhen Er wants to die with Yuan Chunwang, but he kills her in advance. He asks Emperor for punishment and agrees to speak out the name of rebels. But Consort Lin discloses that he is the boss, and reveals she sent Xiao Quanzi to Tai Hang mountain.

Consort Lin prepares to die, but her poison is cleaned then. Hai Lancha tells her that Fu Heng brought the antidote. She is happy and wants to see Fu Heng. But Hai Lancha tells her Fu Heng got malaria when battle. Fu Heng’s body has carried to the Forbidden City. Fu Heng asked Hai Lancha to take words to Consort Lin, “I protect you in my life. Can you protect me next life?”

She is silent, but Hai Lancha doesn’t want to give up and asks her the words again. She says ok to the sky and sees Fu Heng. He smiles and leaves. Empress is sent to cold palace. The maid who takes care of her is Hong Zhou’s friend, he asked her to take care of Empress. Empress knows Hong Zhou loved her until he died, but she cannot make up for it. Consort Lin visits Empress. Empress doesn’t know why she helped her. Consort Lin says that Empress saved her ever, so she remembers her kindness.

Hai Lancha gets poisonous wine to Hong Zhou. Zhong Zhou knows that Emperor wants him to die home to keep the reputation of imperial household. Hong Zhou drinks up the wine then. Yuan Chunwang is insane, Queen asks Yuan Chunwang to release him. Zhen Zhu doesn’t understand why Queen want to release Yuan Chunwang. Consort Lin stops her from saying. Because it means nothing now.

Consort Lin gets the title of Imperial Noble Consort, and concubines are on knees to her. Empress asks her how it feels. She says that she cannot tell him his position in her mind, but she will pay back with her life.