In the 61-62th episodes of Story of Yanxi Palace Chinese Drama 2018 Recap, the outstanding maid Ming Yu commits suicide because of her illness, and Consort Lin steps into the trap of Chen Bi while taking revenge. Queen asks emperor to punish Consort Lin, and he has to send her to cold palace. The servant Xiao Quanzi betrays his master as well, and becomes Yuan Chunwang’s follower. 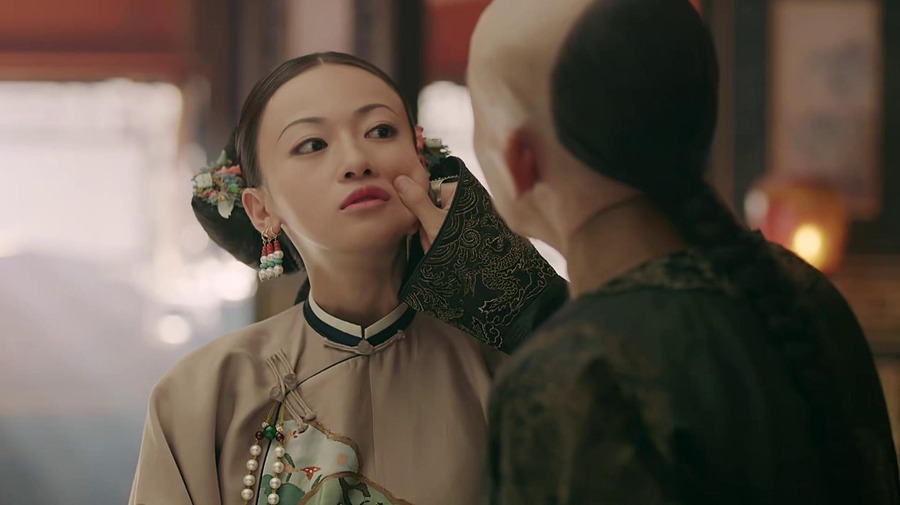 Note: From here on out there are specific plot spoilers for Story of Yanxi Palace Chinese Drama Episodes 61-62.

Ming Yu doesn’t want to involve Hai Lancha, and returns his betrothal gifts. He asks her why she refused him, and she says that she was nice to him because of Consort Lin. So they have to separate since he doesn’t have any value. Empress finds many dilapidated zithers in Household Bureau, and decides to fix it to win emperor’s heart. The twelfth Prince is hit by the zither, and cries out. Empress scolds him.

Emperor doesn’t visit empress, but Hong Zhou writes letter to her frequently. Fu Heng takes Fu Kangan to study in the palace, and punishes his son to stand at the corner of wall, because he is too naughty. Chen Bi shows up, and drops the handkerchief which Consort Lin takes. Fu Heng sees it, and flurried. Chen Bi knows Fu Heng loves Consort Lin after seeing his expression. He is upset after finding out his sachet has same design with the handkerchief.

Fu Heng gives his house to Hai Lancha for his wedding, he was intention to live in the house with Wei Yingluo, but she is Consort Lin now. Chen Bi shows up, and she is the woman Fu Heng saved. She tells him that she will remember his kindness forever, and he asks her about the handkerchief. She claims she embroiders it because she likes the design.

Chen Bi remembers Fu Heng was nervous of his sachet while saving her, and figures up Fu Heng and Consort Lin’s relationship. Ming Yu commits suicide with scissors when Consort Lin goes to prepare more dowry. Consort Lin is sorrow after Ming Yu died, and locks herself up in her room. Hai Lancha knocks at a door to blame Consort Lin, and emperor asks his follower to take Hai Lancha away.

Fu Heng worries Consort Lin, and finds her at the eternal palace. He keeps comforting her since she is sad. But Chen Bi asks the maid to tell emperor about it, and makes him misunderstand them. Consort Lin tells Fu Heng that she regretted that she didn’t wear the wedding dress, so she asked Ming Yu to achieve it for her. She tears up, and emperor just passes by. Consort Lin asks Fu Heng how he found her, and he says that Chen Bi told him the place.

Chen Bi gives the sachet to emperor, and tells him that Fu Heng and Consort Lin have same sachet as well. Emperor is furious, and stops her from talking. Chen Bi is pleased since her goal is achieved.

Chen Bi sleeps with Ying Luo and asks her if it’s warm. The next day, Chen Bi takes a look at Ying Luo when she falls asleep. She shows an evil smile. Queen thinks Consort Lin doesn’t have to copy the Buddha books since she doesn’t want to do it. She thinks it doesn’t respect Buddha.

Consort Lin visits the palace. The maid asks her if she came to give the books she just copied. Consort Lin admits it and tries to pass the maid. But the maid stops Consort Lin, and claims that she will hand it over to Queen in person. Consort Lin wants to come tomorrow. But the maid rejects it, and tells her that Queen doesn’t want her to copy books again.

Consort Lin claims that copying Buddha books isn’t hard task, and she wants to continue to do it. The maid tells Consort Lin that she just tells her the order of Queen. She tells her that Queen wants to talk with Buddha, and she doesn’t want her to come.

Ming Yu walks Consort Lin and wonders why Queen changed her mind. Consort Lin tells Ming Yu to think about her business on her own while seeing Hai Lancha. Hai Lancha pays his respect to Consort Lin, and he wants to have a talk with Ming Yu.

Consort Lin tells Ming Yu to sort out with Hai Lancha. Hai Lancha takes Ming Yu’s hand. She scolds him for touching her as she doesn’t go out of palace. He tells her that Emperor released the order to marry her to him. He thinks it’s fine to talk with his fiancee. He asks her why she returned all of the wedding gifts to him.

Ming Yu says that she needs to pay first if she wants to use Hai Lancha. But he points out that there’re tears in her eyes even if she says something heartlessly. He holds her hands and asks what happened. She lets his hand go, and tells him not to waste time on her. He holds her hand again, and says that he doesn’t believe what she said. He wants to ask her about it after they get married. But she walks away.

Yuan Chunwang feels regret for the zither. Empress tells him to send zithers to her each five days as she wants to play it. He tells her not to do it in person as he will find the best zither worker for her. She mentions the zither was used by previous emperor Kang Xi, and thinks Emperor will throw a fit if he sees the old stuff of his grandfather not being used by anybody.

The maid reminds Empress that Emperor hasn’t stepped into Chengqian Palace because of Shun Ping. She thinks she shouldn’t miss him. Yuan Chunwang thinks Emperor will be moved by Empress if he knows what she does for him as Kang Xi’s birthday is coming.

Empress thinks the zither cover is too tacky, and wants to resign it. Yong Ji ruins the zither from the table, and he cries. The maid gets on knees and feels sorry for not managing the prince well. She asks for Empress’s mercy. Empress scolds Yong Ji, and tells Yuan Chunwang to get a experienced worker to fix the zither.

Empress tells Yong Ji not to cry and thinks he isn’t like her. The maid tells Empress not to get angry as 12th Prince is still young. Empress points out that everyone stares at him because he is the crown prince. Yuan Chunwang comforts Empress that he will get the best worker to fix the zither.

The maid brings a gift to Empress, and says that it was given by Hong Zhou. Empress is surprised. The maid finds a letter from the lantern, and she hands it over to Empress. Hong Zhou tells Empress not to worry about her son as he will train him when he gets into emperor’s study. She smiles.

Consort Lin checks the stuff Ming Yu left, and Xiao Quanzi tells her that Ming Yu met up with Chen Bi before she died. Consort Lin suspects Chen Bi, and visits emperor in the rain. But Mr. Li stops her, and tells her that emperor doesn’t want to see her. She has to leave with disappointment.

Consort Lin thinks Chen Bi wants to hurt herself, and robs the gold scissors. But she stabs Chen Bi. Queen passes by, and asks emperor to punish Consort Lin since she thinks Chen Bi is her daughter Princess of He An. Emperor is embarrassed.

Empress interrogates the servants of Consort Lin, and wants to find the evidence against her. Xiao Quanzi betrays his master, and gets empress’s trust. Consort Lin is sick in the cold palace, and nobody serves her. Yuan Chunwang scolds her, and thinks she was so stupid to step in the trap Chen Bi made. He arranges Xiao Quanzi to serve her, and Xiao Quanzi keeps maltreating her.

Fu Heng argues with Hong Zhou about Gao Bing’s corruption, and Hong Zhou asks emperor to watch the executing of Gao Bing. Fu Heng thinks it’s too cruel, and persuades emperor to forgive Gao Bing because of their relationship. Emperor thinks Fu Heng wants him to forgive Consort Lin, and rejects it.

Chen Bi tells Fu Heng that Consort Lin lives in the cold palace without food and water, and suggest him to take Consort Lin to leave. But he is rational, and wants to report what she said to emperor. But she doesn’t care.