In the 67-68th episodes of Story of Yanxi Palace Chinese Drama 2018 Recap, Empress isn’t intentional to rebel, but Yuan Chunwang and Hong Zhou keep persuading her, and Emperor doesn’t trust her no matter what she explains. In addition, Emperor wants Consort Lin to replace Empress to manage the palace. 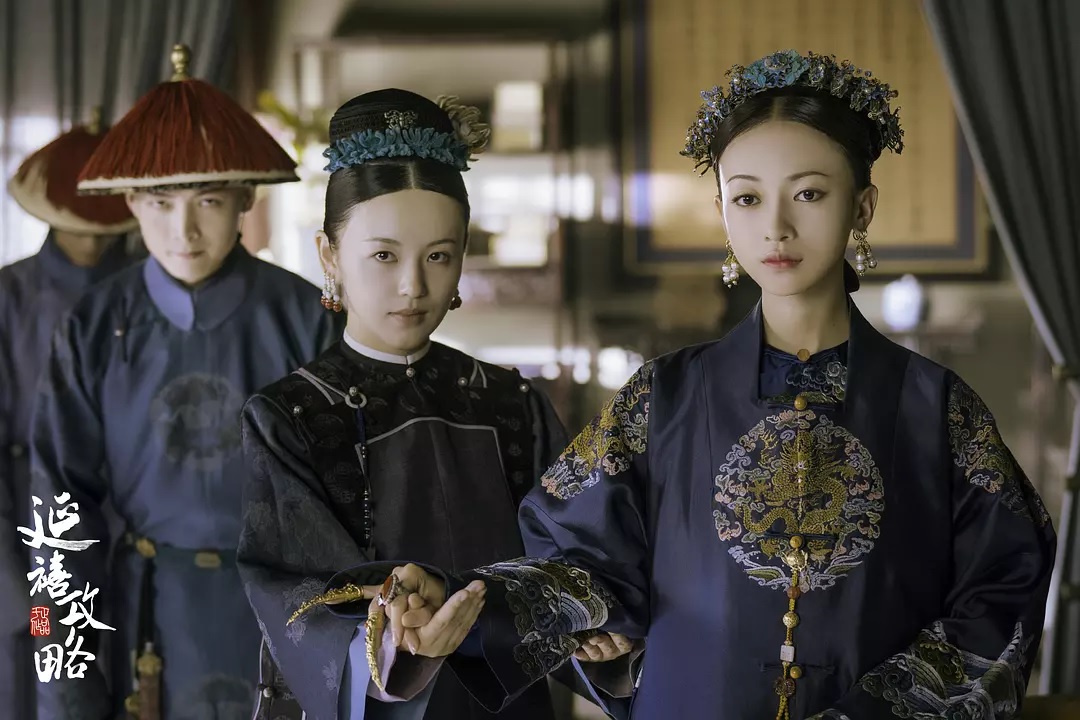 Note: From here on out there are specific plot spoilers for Story of Yanxi Palace Chinese Drama Episodes 67-68.

Empress doesn’t expect what she raised son bit her, and swears that she didn’t murder the fifth prince. Mr. Li reports to Emperor that the sweet dumplings are not poisonous, and the doctor testifies for Zhen Er that he didn’t see the fourth prince.

The fourth prince realizes that he is wronged by empress, and cries out that he didn’t get her love even if he tried his best. Emperor knows the fourth prince is wronged, but he cannot save him, so he locks him up in the Zong Ren house.

Empress wants to save the fourth prince since she raised him many years, but she doesn’t suspect Yuan Chunwang. Consort Lin thinks she needs to find Ye Tianshi, and visits emperor to take revenge the fifth prince. But Emperor doesn’t know how to do, since they’re his sons.

Consort Lin thinks the case is related to Empress, and worries Empress hurts fifteenth prince. Emperor promises to protect her son, but she doesn’t believe his promise. Mr. Li reports to Emperor that Empress is illness, but Emperor doesn’t have any reaction.

Empress dresses up when she is sick. Yuan Chunwang flirts with the maid Yun Xiang and wears flower on her head. Empress thinks Yun Xiang provokes her that she is old, and hits her. Emperor passes by. Empress explains to Emperor that she didn’t hurt the fifth prince. But he doesn’t trust her. So she punishes Yun Xiang.

Yun Xiang runs into Yuan Chunwang and blames him. But he kills her then. Mr. Li reports Yun Xiang’s death to Emperor. Emperor thinks Empress did it. Empress is happy that her wrinkles are gone. But the servant reports to her about Yun Xiang’s death. She collapses.

Zhen Er knows Yuan Chunwang did it, but she doesn’t know his intention. He asks her to help him with the excuse of the twelfth prince. Yun Xiang’s death spreads in the palace. Nalan Chunxue tells Queen that Yun Xiang died of Empress, so Queen isn’t pleased when seeing Empress.

Emperor is going to tour in southern China. Consort Lin worries that Empress hurts princes. So she invites Empress to attend the tour. Nalan Chunxue complains to Consort Qing that she doesn’t trust her, and claims she likes fifteenth, although she dislikes Consort Lin.

Consort Lin thinks she treated Nalan Chunxue excessive, but Yuan Chunwang sees the scene. Empress asks Emperor to take her to tour for her pride, but he doesn’t agree and asks her to recuperate. Yuan Chunwang tells the twelfth prince that Empress insists on tour is for his future, so he is on knees to beg Emperor.

Yuan Chunwang thinks the tour is a good chance, and sends his follower to inform Hong Zhou. Emperor tells the twelfth prince that he won’t take Empress to tour. Just then the fifth prince shows up to persuade Emperor.

Empress swears that she never hurts 5th prince and she doesn’t know the evil action of Yong Cheng. She says that she can accept of the hit of thunder if she breaks the oath. Yong Cheng tells Emperor that Empress is lying, and thinks she is a hypocrisy and heartless woman. He mentions what Shun Ping said that Empress can do anything for her real son.

Yong Cheng says that Empress wants to get rid of him and 5th prince supporting her son. He tells Emperor to trust him. Fu Heng tells 4th prince that they will know it once they look into it. The servant reports to Emperor that there isn’t any poison in the food, and Zhen Er is sick. He adds that Zhen Er said that she didn’t see 4th prince tonight.

Yong Cheng doesn’t believe it, and says that Empress wanted to kill him with poison. He adds that he heard and saw it. Emperor asks about the eunuch. The servant says that Jing Zhong disappears. Yong Cheng realizes that Empress planned everything. He asks her why she treated him in that way, and tells her that he treated her as his real mother.

Yong Cheng asks Empress if he is the chess piece she can give up anytime. She steps back and asks him if he wants to make mistakes again. He yells and asks what mistakes he had made. He says that people only praised 5th prince even if he worked hard. He adds that he wants to be Empress’s real son. He thinks he is a joker in their eyes.

Empress tries to be close to Yong Cheng. But Yuan Chunwang stops her. Emperor orders to take Yong Cheng away, and tells Fu Heng to follow him. Empress calls Emperor. But the servant tells Empress to talk it later as Emperor is upset.

Emperor thinks maybe Yong Cheng didn’t have the mind to kill Yong Qi, but he’s narrow-minded and despicable. He adds that he became the edge of someone else, and she hurt his two sons after he took action. He thinks Yong Cheng was the most stupid. He asks to get him to stay at Zongren House to think about his sins.

Yuan Chunwang tells Empress not to be uneasy as Yong Cheng has been sent to Zongren House. She thinks Yong Cheng is very stupid but he was raised by her. She thinks Emperor wouldn’t trust her since Yong Cheng was related to 5th prince’s injury.

Yuan Chuanwang points out that Emperor said nothing. But Empress thinks it’s not doubt if someone asks about it. She thinks it’s clear because Emperor didn’t give her any chance to explain. She complains that Yong Cheng is a fool, and he got anyone to suspect him because of his impertinence. Empress has a headache and tells Yuan Chunwang to summon the doctor.

The servant reports to Consort Lin that Empress summoned the doctor again. She tells him to ignore it and asks about the follower she sent to Jiang Nan. He tells her that Doctor Ye is living in Hangzhou, and reveals he sent his men to look for him.

Consort Lin thinks she should let Ye Tianshi leave if she knew Yong Qi would be injured. The maid points out that Ye Tianshi would flee even if she didn’t let him go because he hated the palace. Consort Lin swears to find Ye Tianshi as she believes that he can save Yong Qi. The servant promises to try his best to do that, but he worries about 15th prince.

Emperor has a headache. Consort Lin massages for him, and mentions what he said to live long if he eats and sleep regular. She thinks it hurts his health when he stays up late to read over the papers. He says that he knew she would come to demand a justice for Yong Qi.

Consort Lin confessed that she wanted to take away Emperor’s paper to throw it when she walked in the palace. She adds that she wanted to question him how he will deal with Yong Cheng. He holds her hand and asks her why she changed her mind. She says that she didn’t want to do that because she knew he’s too tired.

Consort Lin asks Emperor if he’s pitiless to see Yong Qi’s decadence since he was blessed by God but his wing was broken. She adds that Yong Qi didn’t ask for the justice because he was kind. But she’s not kind and wants to ask it for Yong Qi. She thinks Emperor would be sad no matter what he did because Yong Qi and Yong Cheng are his sons.

Emperor sighs and thinks other people would say his son is her son. He adds that only Consort Lin talked directly. She asks him why he liked to listen to since he knew it was lie.

The fifth prince persuades Emperor to agree Empress to tour, and he wants to attend it as well. Because the doctor Ye Tianshi is in in southern China, and he can cure his leg. Emperor worries about the fifth prince, so he agrees it.

The twelfth prince tells Empress that his father agreed her to tour. She thrills but is disappointment after knowing the fifth prince convinced Emperor. She is furious that the fifth prince did it with a few words, but her son was on knees for three hours. Yuan Chunwang is pleased.

Consort Qing argues with Nalan Chunxue. Nalan Chunxue suspects Empress. But Consort Lin thinks Empress didn’t do it because she is a careful person. Nalan Chunxue really loves the fifteenth prince, but Empress wronged her. She is furious to report it to Queen. Queen punishes Empress to be on knees, and warns her not to hurt princes.

Hong Zhou visits Queen and talks about things when he was a child. She laughs and says Emperor got punished for him, and asks Emperor to forgive Hong Zhou. Emperor decides to give him a chance, Hong Zhou wants to prepare the tour. Emperor agrees it and wants to give title of Imperial Noble Consort to Consort Lin, so she will replace Empress to manage palace.

Hong Zhou hears what they talk, and worries about Empress. Queen thinks setting up Imperial Noble Consort will hurt Empress, and asks Emperor to do it until they complete the tour. Emperor wasn’t intentional to do it, but he cannot trust Empress anymore.

Yuan Chunwang tells the message to Empress, and she is shocked. She meets with Hong Zhou and asks him to stop it since she loves Emperor. But he wants to kill Emperor and gets the twelfth to throne. She isn’t intentional to hurt Emperor, but she agrees it for her son’s future.

Empress tells Zhen Er that she decided to rebel with Hong Zhou. Zhen Er reports it to Yuan Chunwang. He is pleased but asks Zhen Er to steal a jewelry from Empress. Fu Heng reminds Consort Lin that Yuan Chunwang and Hong Zhou wanted to rebel, and asks her to be careful. She asks Xiao Quanzi to investigate someone.