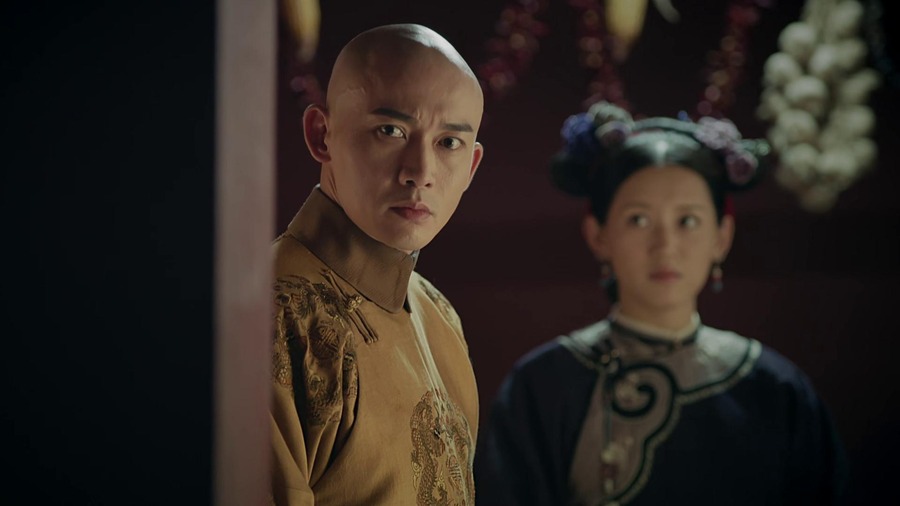 Note: From here on out there are specific plot spoilers for Story of Yanxi Palace Chinese Drama Episodes 31-32.

Hong Zhou wants to stay at the tomb for three years to show his filial piety, but his actions made the emperor angry. The emperor said frankly that he had acted foolishly before, only obeying his mother’s words, but did not think of himself as a prince. He thinks he destroyed himself by making a fool of himself. After listening to the emperor’s words, Hong Zhou realizes that his brother has high hopes on him, and couldn’t help but feels guilty. The emperor asked him to think about if he would go back to his filial duty or think about what contribution he could make for the country.

Hong Zhou stumbles out of the palace gate and runs into Imperial Concubine Xian who comes to discuss with emperor about disaster relief. She sees his eyes are red, and goes to comfort him, inviting him to be relief with her to benefit people. He is more devoted to her than before, and praises her kindness afte she left.

Wei Yingluo was seriously ill, lying in the house coughing. Jin Xiu intentionally evades disaster, and returns to harm Wei Yingluo. Imperial Concubine Xian takes charge of the disaster relief outside the palace, the number of victims of the disaster are too many, and the scene is chaotic. Nalan Chunxue pretends to be a victim of the disaster, and publicly accuses Imperial Concubine Xian mixing sand in her charity, encouraging the rest of the refugees to mutiny. Seeing the scene go out of control, Yuan Chunwang immediately killed the refugees who led the trouble, and publicly pointed out that the rioters were dressed in luxury were not refugees at all. The refugees are in panic after seeing some people were killed, fortunately Hong Zhou arrived in time, leading the soldiers to seize the rioters, so the disaster relief was able to proceed smoothly. They do not know which one is the real refugee, so Yuan Chunwang offers a solution.

The grandpa and grandson are beaten by the servant for poor practice, and the grandson cries and feels that they can not go home. The scene is very pitiful. Wei Yingluo tells them that they can go home safely if they take her advise, but the scene is seen by Jin Xiu.

Er Qing sees Fu Heng falling asleep outside, and puts a coat on him. He is waken up, and declines her kindness, turning around to leave. She asks him what he thought about his grandfather requests the emperor to give marriage to them, but he doesn’t care, and refuses her politely, hoping that she can choose another person. Er Qing is gaffe in front of Imperial Concubine Chun after hearing his words. Imperial Concubine Chun loves Fu Heng as well, and asks herself if her spending is worth it.

Emperor thinks assassins are intention to do it, and asks his followers to search the palace. Hai Lancha thinks Yuan Chunwang looks weird when he takes a tumbrel to pass through. But he gets nothing, so he searches Wei Yingluo’s house. Imperial Concubine Gao refuses to be applied ointment because she is afraid of scar. So emperor forces her to get treatment, and Ye Tianshi finds out she isn’t damaged by iron melt but manure water.

Imperial Concubine Gao asks maid to call emperor, and does the farewell to him. He tells her to take a break, but she wants to dance for him. She leans in his arms, and begs him to let her mother sleep in her family’s grave. This is why she wants to be empress.