In the 59-60th episodes of Story of Yanxi Palace Chinese Drama 2018 Recap, empress and other concubines frame Chen Bi because she gets emperor’s favor. But Consort Lin saves her because Chen Bi treats her as friend, and leaves sign on her chin. So queen forgives Chen Bi because she thinks she is her daughter Princess of He An’s reincarnation. 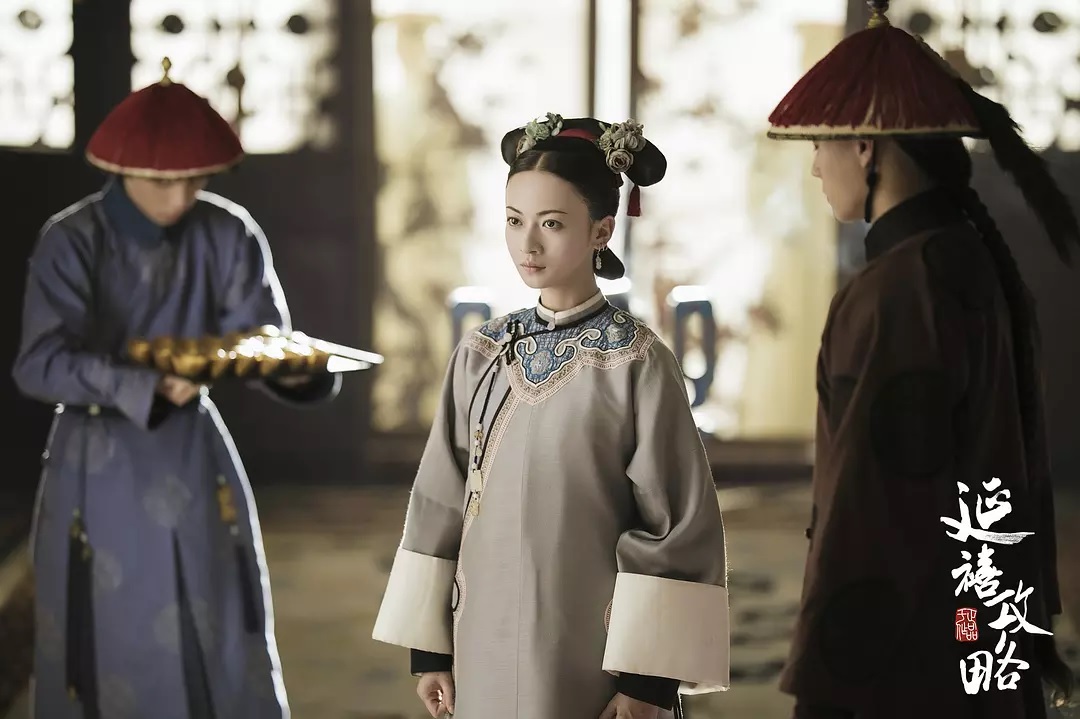 Note: From here on out there are specific plot spoilers for Story of Yanxi Palace Chinese Drama Episodes 59-60.

Fu Heng returns court, and tells emperor that he saw Consort Lin. Emperor is silent, and lets Fu Heng’s son Fu Kangan to study in the palace. It’s an honor for Fucha family.

Emperor visits Yanxi Palace, and Ming Yu tells him that Consort Lin passed out for writing classic book. He tells Consort Lin to stop it, but she says that it’s a wish she promised to God. He feels embarrassed, and wants to leave. She persuades him to stay overnight, as everybody knew he visited Yanxi Palace.

Emperor has to stay at Yanxi Palace, and claims it’s just for her pride. But he requires to sleep at side palace. Consort Lin goes to side palace at midnight, and wants to sleep with him. But he remembers she took birth control soup. She tells him that her mother died of giving birth, and she wasn’t ready for a mother, so she took birth control soup. He gets along with her since she opened her heart, and has a sweet night with her.

Emperor looks at Consort Lin, and thinks she doesn’t know what he wants. The next day, she wakes up, and finds out he went to Chen Bi’s palace. Ming Yu is frustrated, but Consort Lin cheers her up, and visits empress. The concubines dislike Consort Lin, but they have to defeat Chen Bi. Empress is pleased, and wants to see their battle.

Queen returns palace, and empress instigates concubines to badmouth Chen Bi to queen. Queen has bad impression to Chen Bi since everybody says so, and empress is pleased as her goal is achieved. Consort Lin takes Chen Bi away before she visits queen because Chen Bi treated her as a friend.

Consort Lin is curious why queen changed her mind so suddenly. Queen reveals she visited all temples when Princess of He An was dying, and the monk suggested her to leave sign on her daughter’s body, so that they would meet at afterlife. Queen left two signs on Princess of He An’s chin, and finds it on Chen Bi’s chin. Queen believes Princess of He An is reincarnation, but Consort Lin thinks it’s nonsense.

Emperor hears the news, and persuades queen not to trust the monk. He explains that Chen Bi is just a normal beauty, and isn’t a sinister. He thinks Consort Lin badmouthed Chen Bi, and she feels wronged. Queen thinks emperor misunderstood Consort Lin, but emperor points out that Consort Lin isn’t kind-hearted. He holds Chen Bi’s hand to leave, and Consort Lin is sad.

Emperor tests the short gun and thinks the gun Fu Heng gave him is better than Chen Mingxia’s. Fu Heng tells Emperor that Zhang Tingyu passed away and his son asked to escort him home. Emperor thinks Zhang Tingyu did many things for Qing Dynasty and orders to let Zhang Tingyu enjoy royal tomb.

Fu Heng pays his respect to Emperor and thanks him for Zhang Tingyu. Emperor tells Fu Heng that he knew he punished Heng ministers, and mentions they thought he’s heartless. He adds that he hated Zhang Tingyu when he thought of Liu Tongxun’s working hard.

Emperor asks Fu Heng if he went to The Old Summer Palace to pay his respect to Queen. Fu Heng says that he didn’t see Queen because she was paying her respect to Buddha. He adds that he saw Consort Lin and told her Ai Bida took back a super beauty and gave it to Emperor.

Emperor arrives at Yanxi Palace and asks about Consort Lin’s condition. The doctor tells Emperor that Consort Lin’s stomach isn’t well so that he made a prescription. He thinks she didn’t eat regular. Emperor asks the maid how they served Consort Lin. The maid gets on knees and reveals her master used her blood to copy Huayan book. The maid says that Consort Lin hadn’t stopped even if she arrived at Old Summer Palace.

Consort Lin tells Ming Yu to sort out the copies and send it to Old Summer Palace. But she sees Emperor. She asks him why he came, and pays her respect to him. He asks her about her hand. She tells him that it’s just the small scar of bleeding. He orders her not to write. But she says that she cannot obey him because she promised Queen.

Emperor tells Consort Lin that he wanted to let her die, but he reminded her because she took care of Queen. He tells her that she has to take the result if she insists on doing it. He adds that it’s not related to other people if Queen questions it. She says that she understands it, and asks him if he remembers the promise he made. She mentions what he said that he won’t let her get bullied.

Emperor tells Li Yu to clean up the side palace as he will sleep there tonight. Consort Lin gets into Emperor’s sheet. It wakes him up. He gets up and tells her to get out. She tells him that there was mouse in her palace and she fears. He drags her and wants to get someone to catch the mouse for her.

Consort Lin tells Emperor that she doesn’t want to leave and her feet will catch a cold as she doesn’t wear shoes. He tries to drag her off the bed, but she jumps to hug him. He tells her to get lost as he doesn’t forgive her. She kisses him and hugs him again.

Consort Lin confesses that she took birth control pills because she feared to die. She adds that she didn’t want to die in the bed like her mom.

Queen calls emperor to stop, and tells him that she won’t hurt his woman, and invites Chen Bi to visit Birthday Palace. Consort Lin is frustrated. Chen Bi tells emperor that Consort Lin knew empress’s plan, and left signs on her chin. Emperor knows Consort Lin has accompanied queen, so Chen Bi would have die if Consort Lin wanted to frame her.

Chen Bi thinks emperor is still in anger to Consort Lin since he knew she was innocent, but to scold her. She knows he is nice to her, but he had someone in his mind. Emperor laughs since Chen Bi knew his feelings, and tells her not to talk nonsense. He asks her if she is pissed at him, she denies. He claims he doesn’t regard Consort Lin too much, but cannot bear that he isn’t the first in her mind.

Empress waits Consort Lin at Yanxi Palace, and blames her for didn’t get rid of Chen Bi, but saved her. But Consort Lin thinks emperor will punished her if Chen Bi died, empress reminds Consort Lin that she will pay the price for what she did in the future.

The next day, queen calls Consort Lin, and thinks the sign on Chen Bi’s chin is related to her. But Consort Lin denies. Queen calls Chen Bi to confront, and says that she will punished both if she finds out Consort Lin lied to her. Chen Bi makes up a story to cheat queen, and queen is pleased. Consort Lin asks Chen Bi who told her the story, and Chen Bi says it was emperor. Consort Lin is jealous.

Consort Lin sends Ming Yu to take black stone, but Ming Yu is sick on the way, and sees Xiao Quanzi carrying betrothal gifts. Xiao Quanzi tells her that Consort Lin is preparing wedding for her, and Hai Lancha confesses his love to Ming Yu. Ming Yu thrills but her chest is in pain. She remembers Ye Tianshi told her the silver needle is in her lung.

Ming Yu is in pain, and pushes over Hai Lancha’s betrothal gifts. She tells Consort Lin that she doesn’t want to get marry, and Consort Lin asks her for a reason. But Ming Yu cannot tell the truth, and is in tears in her room.

Chen Bi visits Ming Yu, and asks her why she doesn’t want to get marry with Hai Lancha since she made shoes for him. Ming Yu has to tells Chen Bi there is a silver needle in her body. Chen Bi suggests Ming Yu to see doctor, but Ming Yu tells her that there isn’t any treatment can cure her illness, and doesn’t want Hai Lancha to see her death. Chen Bi suggests Ming Yu to get marry since Hai Lancha asked emperor for the marriage, and he cannot face others if Ming Yu cancels it.

Chen Bi claims to Yanxi Palace, and talks with Consort Lin in the bed. She suggests her to pretend to be weak, so people will like her. Consort Lin asks Chen Bi why she keeps annoying her. Chen Bi tells Consort Lin that they’re same kind of person who doesn’t belong to the forbidden city, but has to stay in there. Chen Bi suggests Consort Lin to help each other since they’re lonely. Consort Lin claims she has Ming Yu. But Chen Bi thinks Ming Yu just obey Consort Lin’s orders, but never understands her.