This is the recap for K-Drama The Red Sleeve Cuff: Episode 5. Deok-Im follows Yi San to walk into the house. But the bodyguards put the swords on her neck. They drop the swords when Deok-Ro shows up behind Deok-Im. She’s surprised to see him, and asks him who are the people around her. 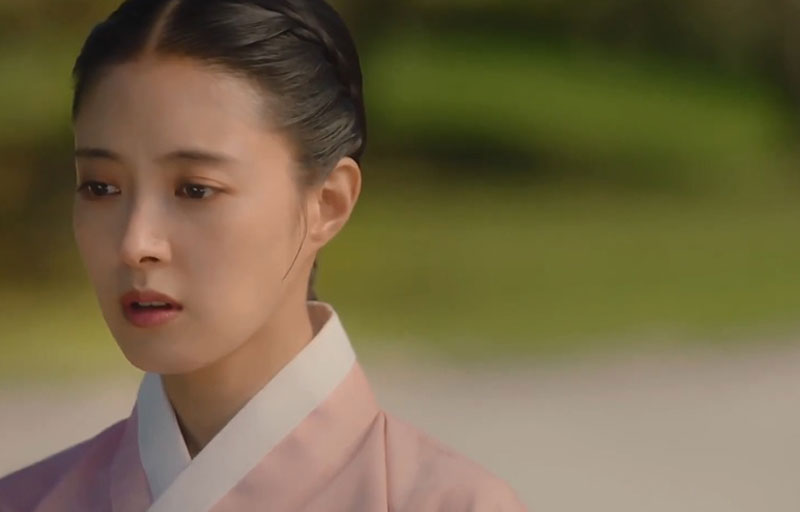 Note: From here on out there are specific plot spoilers for K-Drama The Red Sleeve Cuff: Episode 5.

Yi San tells Deok-Im that she’s not his personal maid. He asks her for leaving his palace. She’s shocked. She tells him that he knows that he’s the only person who can save her. She adds that she doesn’t want to get killed. He asks her why she didn’t tell the truth to him.

Deok-Im tells Yi San that she worried that he would fall for a courtesan. Because he’s a man as well. He yells at her that he’s the future king, and tells her that he wouldn’t do such a thing. She praises him and thinks it’s her honor to work for him.

Yi San asks Deok-Im if she’s flattering him. She denies and tells him that she said it with her heart. He sighs. She asks him if he’s not in anger. He tells her not to speak. She follows him and gets into the house where a lot of followers are waiting for him.

Yi San lets Deok-Im sit next to him. She finds out that Deok-Ro sits in front of her. Yi San introduces Deok-Im as the woman he trusts to the followers. He adds that he invited her to take part in the meeting. But the guard points out that he didn’t receive such an order from Yi San. Yi San blames the guard for not remembering it. The guard gets on knees to Yi San. He apologizes to him. Yi San forgives the guard.

Jae-Hwa remembers that Deok-Im is a friend of Princess Chungyeon. She greets him and sees the token Deok-Ro prepares for her. He tells her that he did it for welcoming the new member of their party. Yi San thinks Deok-Ro doesn’t have to treat Deok-Im as a member because he just gives her a task. But Deok-Ro points out that Deok-Im has become the member after she walked into the room. Deok-Ro offers to leak the background of Deok-Im. Yi San tells the followers about Deok-Im’s background.

Yi San walks at the street. He tells the followers to leave. He takes Deok-Im to the bookstore. He buys some books and throws the books to her. He leaves the bookstore with her. He asks her for reading the book and leaving the note. He adds that he will explain it to her if she has questions.

Yi San notes that Deok-Im isn’t happy. She denies when she holds the books. She tells him that she’s happy because she only got the light punishment from him. It makes him angry. Because he thinks it’s not a punishment. She gets his point and thanks him for giving those books to her when she bows to him.

Yi San walks Deok-Im and tells her that the ladies in his palace are ants. But she points out that the teacher of crown prince is too offensive. He stops. She realizes that she said something wrong, and asks him for his mercy. He tells her that she doesn’t fear him because she still treats him as the teacher of crown prince. Yi San tells Deok-Im that he was happy when he stayed in the library with her. He confesses his feelings to her. The books drop after she heard what he said. He tells her to take the books home. He walks away.

Deok-Ro shows up when the ladies wear the beautiful dresses. Bok-Yeon trips when she sees Deok-Ro. But he takes Deok-Im away because he wants to have a talk with her. Deok-Ro feels sorry for almost killing Deok-Im. She gets his point and tries to leave. He tells her that he didn’t intend to hurt her.

Deok-Im tells Deok-Ro that she’s not a fool. She says that she knows that he’s a bad person. He tells her that she misunderstood him. He adds that he wants to be a friend of her because they need to serve Crown Prince together. He asks her what kind of woman she is in Yi San’s eyes. She tells him to ask Yi San about it himself.

Deok-Ro tells Deok-Im that he cannot ask Yi San about it because he’s the future king. He decides to find the truth himself since she refused to tell it to him. He tries to walk away. But she stops him and asks him if he wants to know her feelings to Yi San. He tells her that he’s not interested in her feelings because she’s just a lady.

Deok-Im returns to the palace. Bok-Yeon and other ladies surround Deok-Im. She asks her what Deok-Ro said to her. Deok-Im reveals Deok-Ro asked her to look for the book for him. Bok-Yeon tells Deok-Im to go to complete the task. King Youngjo has a meeting with the ministers. The ministers think Yi San is qualified to be the king. King Youngjo laughs. He intends to let Yi San regent.