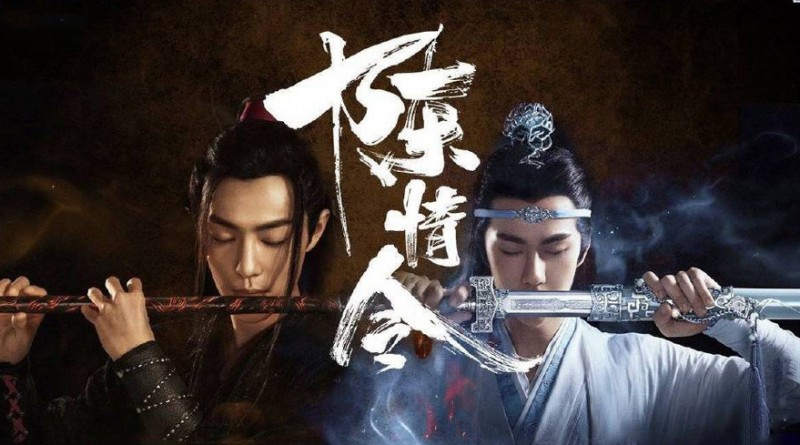 These are recaps of The Untamed Chinese Drama 2019 Episodes 13-14, Wu Xian stands the nausea and moves inside the the body of the monster. He meets a lot of ferocious bodies, and they lost their souls. It seems that the tortoise chewed up their soul, and Wu Xian finds a sword. 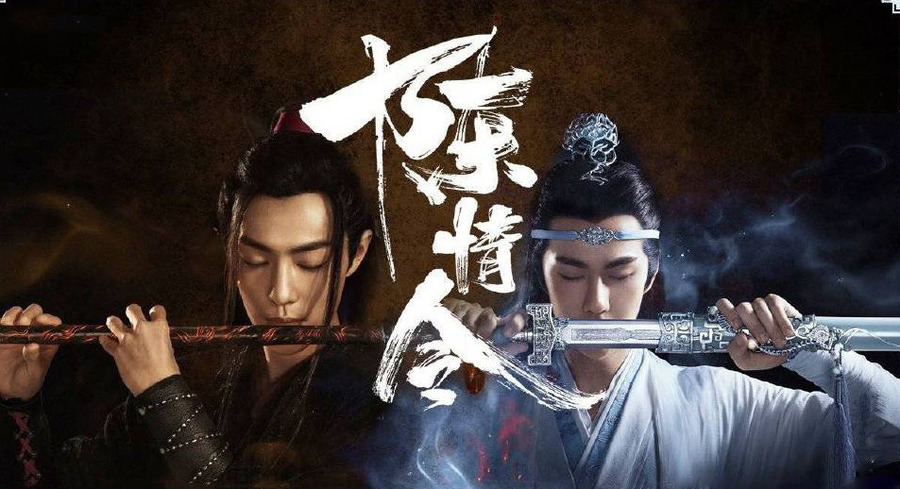 Note: From here on out there are specific plot spoilers for The Untamed Chinese Drama 2019 Episodes 13-14.

Wen Chao takes people to go to Muxi Mountain. Wu Xian worries about Wang Ji’s injury and wants to carry him. But Wang Ji rejects it. Wu Xian posts a paperman on Wen Qing and asks her to help Wang Ji rest. So Wen Qing asks people to take a break, but Wen Chao warns her not to bring trouble.

The girl Ling Jiao gets people to find the entrance of cave, which monsters live. She is the maid of Wen Chao’s wife, and slept with him because she is pretty. People don’t find the entrance, and Wu Xian takes out a spell and disperses the fog. The entrance appears.

Wu Xian takes torch and lead people to walk in the cave, which is full of rubble. Wen Chao pushes Wu Xian down to detect for him. Wang Ji and Jiang Cheng go down as well, and Wu Xian is safe. They walk through a deep and serene path, and see a pool with green light. Wen Chao arrives with his men, and prepares to draw monsters with Mian Mian’s blood. Zi Xuan doesn’t want Mian Mian to get killed, and Wu Xian kidnaps Wen Chao with his sword. He jumps to the rock in the center of water.

Wen Chao fears death, and Zhu Liu doesn’t dare to take action. Wu Xian senses the shake under his feet and treats it as earthquake. But he finds that the rock moves after Wang Ji reminded him. The huge head shows up from the water, and we see the scared Killing Turtle. Wang Ji asks everyone to hold your breath. As the turtle doesn’t have good eyesight, and he cannot recognize direction if nobody makes voice. But Wen Chao asks Zhu Liu for help, and the turtle begins to attack people.

Ling Jiao is jealous of the beauty of Mian Mian, and wants to hurt her with scalding iron. Wu Xian saves Mian Mian but gets hurt on his chest. Wen Chao takes Ling Jiao and Wen Qing to flee, and cuts off the rope used for escape, regardless of Wen Qing’s stop. He blocks the exit with rock, and doesn’t want Wu Xian to go out with life. Wang Ji detects that only pool has maple leaves, and it indicates there is an exit at the bottom of pool.

Wu Xian casts the torch to turtle, and Wang Ji catches the chance to jump into the pool and find the exit. Wu Xian asks people to flee with Jiang Cheng, and he leaves to stop turtle. Mian Mian trips into water while fleeing, and her hand is hurt by rock. The blood seeps into water, and it makes turtle mad. Turtle attacks Wu Xian, and Wang Ji helps Wu Xian. But Wang Ji’s leg hurt again. Wu Xian gets up and takes Wang Ji to flee to narrow cave. Turtle’s big head cannot pass the cave, so he dives. Wu Xian fixes Wang Ji’s bone with branches, and pulls down his band as rope. Wu Xian knows there is a gore in Wang Ji’s chest, and he intended to ask him to take the medicine Wen Ning gave, but it lost while fighting. So he takes off his clothes. But it irritates Wang Ji, and he vomits blood. The injury is cured.

Wu Xian feels pain in his chest, but he doesn’t regret. Even if the scar will stay on his chest all his life, it proves that he acted heroically ever. He comforts Wang Ji that someone else will save them. But Wang Ji is dejected that Cloud Place is burned into ruins, his uncle is injured, and his older brother is missing. Wu Xiao also worries about Jiang Cheng and Cloud Dream.

Wang Ji falls asleep, and Wu Xian dives to the pool. He finds out the giant turtle is very smart, and he doesn’t find the exit Jiang Cheng mentioned. He thinks it has been blocked by giant turtle, and he and Wang Ji cannot avoid the fight. Wang Ji remembers Lan Yi told him that Chong Hai controlled an ancient monster tortoise. It seems that the monster is left by Chong Hai. Wu Xian is excited, and thinks he will get the reputation if he kills the monster.

Wu Xian and Wang Ji make a lot of arrows for dealing with tortoise. They have plan to get Wu Xian to sneak into the turtle shell, and forces turtle to get out of the shell. Wang Ji will use string killing art and fights with the monster. Wu Xian stands the nausea and moves inside the the body of the monster. He meets a lot of ferocious bodies, and they lost their souls. It seems that the tortoise chewed up their soul, and Wu Xian finds a sword. He holds the sword handle, and ghost’s crying come. The sword gathers much resentment to trap the tortoise.

Wu Xian pulls out the sword, and tortoise begins to attack him. Wu Xian stabs tortoise’s chin and draws him out of his shell. Wang Ji catches the chance to attack. Wu Xian holds the sword and doesn’t let it go. He feels uncomfortable in the beginning, but he shows evil smile and waves. The swords by the shore stand up and stab to tortoise’s neck.

Wu Xian falls into water and passes out. Wang Ji helps Wu Xian arrive at the shore. Wu Xian wakes up and claims he was stunned because he heard the scream. Wang Ji finds out that Wu Xian is in fever, so he infuses spirit power for him. Wu Xian asks Wang Ji to sing for him, and Wang Ji does it. Wu Xian thinks Wang Ji’s music is beautiful, and passes out. He wakes up and finds out that he is lying at the grass. Jiang Cheng and Zi Xuan are there, and Wang Ji went to Gusu.

Wu Xian has passed out for seven day and night, and Jiang Cheng couldn’t ride sword to return to Cloud Dream for men because he didn’t have sword. Zi Xuan convinced chief of Jin family to be against Wen family with other families. So he took his men to save Wu Xian and Wang Ji. Wu Xian thanks Zi Xuan and thinks he has guts. Nobody notes Wu Xian’s sword with resentment.