“You Are My Hero” is a new Chinese medical and military romance drama which comes out in 2021. The drama tells a story about a doctor Mi Ka who is saved by a special cop Xing Kelei in the jewelry robbing case. She falls for him but he doesn’t know who he is. Because he wore a mask when he helped her from the robbers.

“You Are My Hero” is adapted from Mu Qingyu’s novel “You Are My City and Fortress“.

Ma Sichun and Bai Jingting are the lead actors.

Bai Jingting starred Chinese romance drama “Irreplaceable Love” in 2020. He cast “The Rise of Phoenixes” in 2018. He played the swordsman Gu Nanyi who wants to protect the empress. 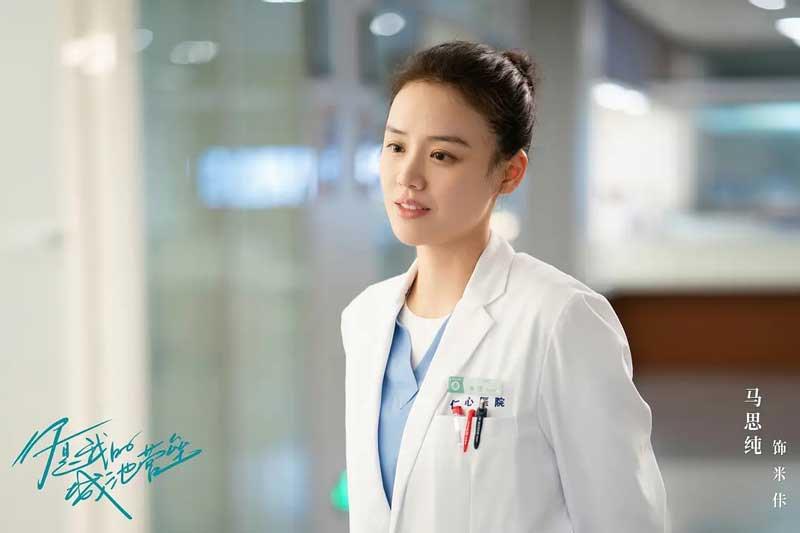 Title: You Are My Hero

Mi Ka gets involved in the jewelry robbing case. The robber puts the bomb into her hands. She is scared. The special cop shows up and tells her not to be nervous. He saves her and asks her about her name. She tells him that her name is Mi Ka.

Mi Ka looks for the special cop. But he left. She doesn’t know his name and she didn’t see his real face because he wore a mask. Mi Ka is asked to get into the police school to accept the training. She encounters the demon instructor. She dislikes him because he always gives her hard time. But she doesn’t know the instructor was the one who saved her.

Mi Ka waits for Shao Yuhan and tells him that she worships him. He thanks her but gets into the elevator. She runs downstairs and asks for a talk. But he tells her that he needs to take the flight. She walks him and asks him to take a look at the case of her friend. But he rejects it.

Mi Ka mentions what Shao Yuhan said to let patients live with dignity. But he thinks it’s unprofessional to invest too much emotion in patients. She talks back that they shouldn’t give up patients when there’s a little wish. He tells her that he will reply her. She smiles.

Xing Kelei waits for Mi Ka and thinks she has guts. He hears the talk of the girls, and learns that they tricked instructor. Xing Kelei picks up the foods for Mi Ka in the convenience store. He asks her if she doesn’t recognize him. She realizes that he was the person who drove her to the city. She wants to buy him foods. But he rejects it.

Shu Wenbo introduces Xing Kelei to the students. Xing Kelei tells the two students who tricked Shu Wenbo to run around the playground for 10 circles. He tells the students that someone left the camp without permission. He punishes everyone because of the person.

Mi Ka visits Xing Kelei and asks him for his mercy. He tells her that he should expel her according to the rule. She’s surprised and tells him that she had a reason so that she didn’t ask for leave. He asks her to clean up the restrooms.

Shu Wenbo tells Xing Kelei that there will be a reporter coming. Xing Kelei tells Shu Wenbo to pick up the reporter for him because he wants to train the students.

Ruan Qingxia tries to get in the camp. But Shu Wenbo stops her. She tells him that she’s the reporter. He feels sorry and puts her luggage in his car. He drives her to the house which she’s going to live. Shao Yuhan calls Mi Ka and tells her to come with the patient Ye Xiaoman. She promises it and runs away. Xing Kelei fails to stop her.

Mi Ka thanks Shao Yuhan for helping her friend Xiao Man. He mentions what she told him not to give up lives. He adds that he thinks so as well. He tells Xiao Man that he can send her abroad to get the treatment. But she needs to pay the alimony. Xiao Man wants to give up. Mi Ka stops Xiao Man because she wants to pay the alimony for her.

Mi Ka apologizes to Xing Kelei. But he tells her that she got expelled. She begs him not to expel, and promises to clean up each place. He tells her that he wouldn’t punish anyone because his personal emotions. He scolds her for emphasizing her personal reason. She cries and tells him that she wants to learn something there to save some people.

Mi Ka tells Xing Kelei that she won’t leave. He tells her that she won’t give her the degree. She yells at him that she doesn’t come for that. Ruan Qingxia recognizes Mi Ka and gives her a hug.

Xing Kelei finds Mi Ka in the woods. She tells him that she just tripped. He carries her to his office after knowing she couldn’t walk. He wants to call a doctor since he doesn’t know how to treat her wound. She stops him and treats her wound herself.

Mi Ka thinks Xing Kelei will punish her again. She worries about it. But he asks about her friend Xiao Man instead. She wonders how he knew it. He tells her that Ruan Qingxia told the case to his leader. He tells her not to get training tomorrow because she’s injured. She learns that he won’t kick her out, and sneezes. He avoids it.

Mi Ka blames Xing Kelei for not being a gentleman. He tells her that he doesn’t want to waste time on caring for women, and gives the medicine to her. Shu Wenbo finds Ruan Qingxia and blames her for her late. She explains to him that she has texted him about it. He tells her that the time of special police cannot be changed.

Ruan Qingxia tells Shu Wenbo to appoint it tomorrow. He blames her for disturbing their works as a media worker. He thinks it’s unprofessional. He mentions she let Captain Hao force Xing Kelei to keep Mi Ka. She talks back that it’s unreasonable he replaced Xing Kelei to get interview. He points out that he didn’t want to come. But he follows her. She wonders why he follows her since he didn’t want to come.

She’s not a qualified doctor. But she wants to save more people after she was saved by Xing Kelei. She has looked for Xing Kelei but she doesn’t know the person is the instructor who pursues her. The love begins after they knew each other’s feelings.

He falls for Mi Ka after he saved her. He recognizes her and cares for her after she got into the police school. But she mistakes that he wants to bully her. So she doesn’t know his feelings to her even if he tries to be close to her.

He is an outstanding doctor. He wants to train Mi Ki to be the doctor like him. Because he sees the passion inside her body. But Xing Kelei mistakes that Shao Yuhan likes Mi Ka, and treats him like enemy.

She is a reporter. She is also Mi Ka’s best friend. She likes the special cop Shu Wenbo, and tries to be close to him. But he thinks he cannot be match for her. Because he’s not rich.

He’s a special cop. He’s also the best friend of Xing Kelei. He likes Ruan Qingxia but he isn’t confident enough. So he rejects her.

She’s the older sister of Xing Kelei. She sets a blind date for her younger brother. But she finds out that Xing Kelei isn’t interested in the girl.