This is the recap for Eternal Love of Dream (Three Lives, Three Worlds, The Pillow Book): Episode 1. Demon Queen Miao Luo fights with Dong Hua, and casts the fire rocks to attack him. But he stabs her chest with his blue river sword. She tells him that he cannot kill her as she is demon queen. 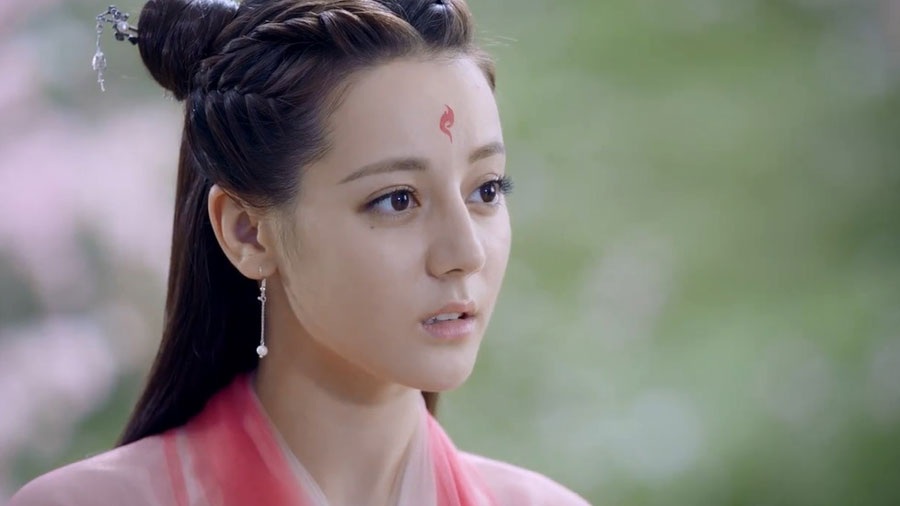 Note: From here on out there are specific plot spoilers for Eternal Love of Dream: Episode 1.

Demon Queen Miao Luo turns the rock into the fire rock and casts to Dong Hua. He blocks the fire rock and flies to stab her chest with his sword. She tells him that he cannot kill her even if he takes Blue River Sword as she is demon queen.

Miao Luo holds Dong Hua’s sword and attacks him. But he avoids it. She laughs after knowing he wants to lock her with Locking Soul Jade. But she learns that he wants to use his cultivation to seal her. She tells him that he and the world will be ruined when she goes out of the seal. She swears to make him see what he cares for turning into purgatory.

Feng Jiu draws the painting and thinks she did a great job. But the master reminds her that it’s the class of buddhist. He tells her to copy the buddhist scriptures for ten times since she worships Dong Hua. She promises to bring the homework before the class.

Dong Hua is fishing. Lian Song tells Dong Hua there is no fish if the water is too clean. He asks him if he’s in meditation because there’s no hook and bait. Dong Hua points out that Lian Song cannot see the flower realm in the heart with his cultivation. But Lian Song thinks Dong Hua is just a weird old man. Dong Hua fishes a big fish. Lian Song is surprised. Dong Hua learns the reason why Cheng Yu ignores Lian Song.

Feng Jiu talks with the classmate about how to steal the pomegranate of black bear’s family. Jing Wei calls Feng Jiu and tells her that Bai Qian and Zhe Yan invite her to appreciate the peach blossom. But she says that she won’t be fooled since the two appreciate flowers each day.

Feng Jiu thinks Bai Qian and Ye Hua are in love each day, and the two want to hand over her to the old phoenix to discipline. She says that she doesn’t want to get disciplined by Zhe Yan. Feng Jiu tells Jing Wei to tell Bai Qian and Zhe Yan that she is busy in studying.

Feng Jiu intends to go to Qingyao Mountain to look for treasure with her classmate. But Jing Wei stops her as his master asked her to take her back. She reminds him that he’s just a little mount of her little uncle, and claims that she is the princess of Blue Mountain. She tells him to catch her, and gets her friends to take him down.

The wind blows Feng Jiu, and she falls in the forbidden valley. The guards note that someone has broen into their place, and look for Feng Jiu.

Chi tells Xuan that Chishui clan and Qingshui clan fight for the valley. Xiao Yan is furious and thinks they cannot live after demon queen got defeated.

The demons want to break into the sealed place and save demon queen. Chi worries that Demon Queen will attack them as well. Xiao Yan wants to fight with Dong Hua. But Xuan reminds Xiao Yan that Chi is the chief.

Feng Jiu draws the guard’s attention with her tail and stuns him. She tries to get in the cave, but she is blocked by the seal. The tiger attacks Feng Jiu, and Demon Queen thinks Dong Hua’s ending will come true like what she planned.

Dong Hua saves Feng Jiu from the mouth of the tiger. Feng Jiu recognizes Dong Hua, and runs away.

Chi asks Dong Hua why he broke into their forbidden place. Dong Hua explains that he noted some unusual things and went to check. But the tiger rushed to him. Feng Jiu is furious and wants to deal with the tiger. But Jing Wei takes her away.

Jing Wei flies and reminds Feng Jiu that demons will threaten Qing Qiu with them if they get caught. She thinks she cannot walk away as Dong Hua conflicted with the demons for saving her. He tells her that nobody can hurt Dong Hua.

The guard reports to Chi that the one broke into forbidden place was a girl, and Chi asks Dong Hua to hand over the girl. But Dong Hua says that he didn’t see anybody. The guards are around Dong Hua.

Lian Song stops Xu Yang and thinks he is declaring a war against the gods. Xu Yan asks Dong Hua to hand over the girl. Lian Song smiles and thinks Dong Hua is so mischievous. Dong Hua says that he didn’t see any girl.

Lian Song tells Dong Hua to promise one thing to demons. Dong Hua agrees to it with the condition of not killing or going against morality and justice.

Jing Wei releases Feng Jiu, and she trips. Jing Wei tells Zhe Yan that Dong Hua saved Feng Jiu. Feng Jiu reads the book, but she doesn’t know the meaning of “Nine Stages of Meditation”. So she asks Bai Zhen about it.

Bai Zhen explains that it’s the nine stages of practicing meditation. Feng Jiu thinks it’s really mysterious and abstruse. He tells her to bring the jade hairpin to her dad. Feng Jiu wonders why Dong Hua gave up demon path and chose god path, since there’re so many beauties in demon clan.

Zhe Yan reveals, “A lady from a famous demon family, was known for being dissolute. Whichever man she took a fancy on, she would have a one-night stand with him that very night. After seeing Dong Hua, that lady was lovesick.”

Dong Hua walks to the bed the lady lies, and she tells him that she’s waited so long for him. But he throws her out.

But Zhe Yan thinks Dong Hua likes something fiercer as his three rides are either lion or tiger.

The people tell Si Ming that Dong Hua went to demon clan for a girl and he liked her at first sight and loved her at second sight. Si Ming learns that Lian Song told them the message.

Feng Jiu asks Zhe Yan to help her be close Dong Hua, and he agrees to it as he thinks Dong Hua won’t be able to resist Feng Jiu and her cooking skills.

Feng Jiu tells Si Ming that she wants to be a fairy maid to serve Dong Hua for paying back his favor. But he thinks it’s beneath her dignity as she is the future empress of Qingqiu.

Feng Jiu says that she only needs to not to keep others from figuring out who she is, and reveals Zhe Yan has concealed the phoenix feather flower on her forehead. Si Ming thinks she planned to trick him, and Feng Jiu cries.

Feng Jiu tells Si Ming that she will become a miserable little fox. He promises her but asks her not to mess with other things. Feng Jiu is happy to run away. Si Ming worries that Feng Jiu’s passions and efforts will be wasted.

The maid reports to Zhi He that the new maids are waiting for her to choose in person. Zhi He sends the maids away as they’re too pretty. She asks Feng Jiu to lift her head, and Feng Jiu worries that she will get kicked out.

The maid reports to Zhi He that Dong Hua returns. Zhi He goes to pick up Dong Hua. Feng Jiu thanks Zhao Lu for helping her, and Zhao Lu tells Feng Jiu to avoid Zhi He. Because Feng Jiu is very beautiful.