This is the recap of Eternal Love of Dream (Three Lives, Three Worlds, The Pillow Book): Episode 3. Feng Jiu sneaks into the palace, and she is lost when Zhi He serve Dong Hua the cakes. Lian Song tastes the cake and sees Cheng Yu. He asks her if she wants to eat. 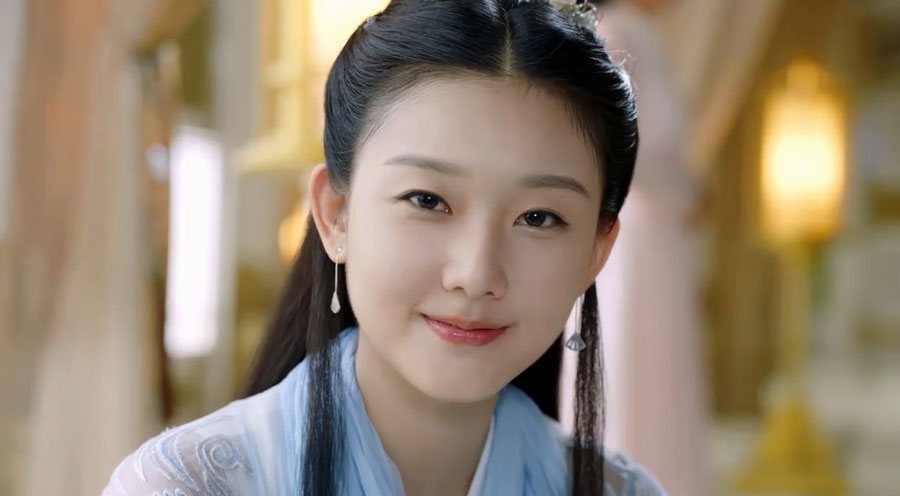 Note: From here on out there are specific plot spoilers for Eternal Love of Dream: Episode 3.

Cheng Yu nods. Lian Song bites the cake and intends to feed her with his mouth. But Si Ming blocks Lian Song’s mouth, and thinks there is an illusion.

Lian Song says that the cake brought his lips and teeth the taste of sorrowless flower’s fragrance with the sweetness of Zijin honeydew. He tells Dong Hua to taste the cake, and reveals the fishy smell is gone.

Dong Hua tastes the cake and asks who made it. Zhi He lies that she made it, and he gives the name sorrowless pastry to the pastry.

Feng Jiu is happy and thinks Dong Hua has same mind with her. Lian Song sees Feng Jiu’s tails, and Si Ming eats up the fish to distract Lian Song.

Si Ming walks out of the palace and tells Feng Jiu to leave. Zhi He notes Si Ming’s leaving, and he explains that there was a little fox.

Lian Song asks Si Ming to take out the fox, and intends to use it to make a smooth tippet. Dong Hua says that the immortal animal in his palace is well trained, and thinks Lian Song wouldn’t have been so naughty if Heavenly Emperor had been as attentive as him.

Feng Jiu realizes that Dong Hua saved her again, and thinks she has to repay the grace until the end of the world.

Si Ming places Feng Jiu under the rock, and she praises Lian Song for tasting out Zijin honeydew. But Si Ming scolds Feng Jiu for being so reckless.

Feng Jiu tells Si Ming that it was her first time to see Dong Hua, and she doesn’t have a room to stay. Cheng Yu shows up and reminds Si Ming not to be fooled by Feng Jiu.

Cheng Yu says what the play said that an elegant young man was in trouble and saved by a miss. She tells Feng Jiu that she will support her if she visits her.

Si Ming stops Cheng Yu and thinks Feng Jiu is bold. Feng Jiu pushes him aside, and thinks Cheng Yu is kind to her. Cheng Yu blames Si Ming for telling her secrets to Lian Song.

Feng Jiu reveals Lian Song intended to use her to make a fox tippet. Cheng Yu says that Lian Song is the person to irritate her to offend him, so he will take the chance to deeply offend her.

Zhi He asks Feng Jiu if she made the pastry, and Feng Jiu admits that she overturned the pastry so that she used her hometown pastry to replace it.

Zhi He asks Feng Jiu to teach her each step of making the pastry, and Feng Jiu tells Zhi He to choose any flower core she likes. Zhi He asks the maid to serve the teas Dong Hua likes.

Chi Wu realizes that he masters nothing Ji Heng likes, and the maid tells Chi Wu that the kitchen cooked the braised demon beast. He asks her to tell the kitchen not to cook it anymore as he thinks Ji Heng won’t like it. He tells her that he will braise them if he cannot marry Ji Heng. Chi Wu thinks Ji Heng will fall for him if he defeats Dong Hua.

Ji Heng mentions Min Su got punished for accompanying her to play in the woods. Min Su says that the punishment is nothing if Ji Heng can be happy. Ji Heng reveals she smiled because Min Su stayed with her, and grabs her hand.

Ji Heng says that she wants to stay with Min Su while leaning her head on her hand. Xun Yang watch them.

Chi Wu asks Xuan Yue to get someone to send the fight letter to nine heaven. Xuan Yue intends to get Zi Lan to do the job. Chi Wu is against it as he feels shameful to his brother. So Xuan Yue leaves the job to Dou Mu Granny.

Zhi He brings the sorrowless pastry to Dong Hua, and Dong Hua asks Lian Song to taste it. Lian Song asks Zhi He why the pastry doesn’t contain the realm of sorrowless. She tastes it and realizes that Feng Jiu cheated her.

Zhi He blames Feng Jiu for playing tricks on her, and Feng Jiu explains that the flower core of the sorrowless pastry varies from person to person. Zhi He wants to make the same pastry as Feng Jiu since Dong Hua likes what Feng Jiu made.

Zhi He kicks Feng Jiu into the water, and tells her to pick up the flower. She enjoys the tea on the boat.

Chong Lin reports to Dong Hua that Dou Mu sent them the fight letter of Chi Wu. Dong Hua asks Chong Lin what is the most important thing to tea leaves. Chong Lin says that it’s the time of picking tea leaves.

Feng Jiu swims while containing the root with her mouth. Zhi He takes away the root and leaves with the boat. The maid tells Zhi He that the fish is in the pot, and Zhi He asks Feng Jiu to watch the fire for her.

Chi Wu asks Xuan Yue why Dou Mu left without any message, and Xuan Yue goes to get the message.

Feng Jiu falls asleep while watching fire, and dreams that Dong Hua kisses her. But she finds out that the fish is burnt. So she has to get a new fish from the pond.

Chi Wu summons Xuan Yue and asks when he will fight with Dong Hua. Xuan Yue comforts Chi Wu that his friend is a fish, who can see Chong Lin.

Chong Lin tells Zhi He that Dong Hua is in the kitchen, and she thinks her fish drew Dong Hua. The maid reminds Zhi He that Feng Jiu will take her award.

Zhi He steps in the kitchen and tells Feng Jiu to leave. But Dong Hua stops Feng Jiu and asks about the flower on her hairpin. She says that it’s the star of Qingqiu, and he returns the hairpin to her.

Feng Jiu is happy for talking with Dong Hua, and she shouts.

Xuan Yue brings the letter that Dong Hua doesn’t have time to fight because of the time of picking tea leaves. Chi Wu thinks Dong Hua treats him like a fool.

Chi Wu brings the tea leaves and asks Dong Hua when he will have a fight with him. Dong Hua reveals that there are some flowers he needs to plant, and Chi Wu does the job for Dong Hua.

Dong Hua tells Chi Wu that he needs to clean up the sludge of the pond. Si Ming asks Chong Lin why he smiled, and Chong Lin reveals Chi Wu took the chores for fighting with Dong Hua.

Chong Lin worries that Chi Wu will do something bad if he finds out that he was fooled by Dong Hua. Si Ming comforts Chong Lin that Dong Hua is always find after he fools people.

Chi Wu realizes that Dong Hua played tricks to him, and puts up a desperate fight with him. But he gets thrown out of the palace.