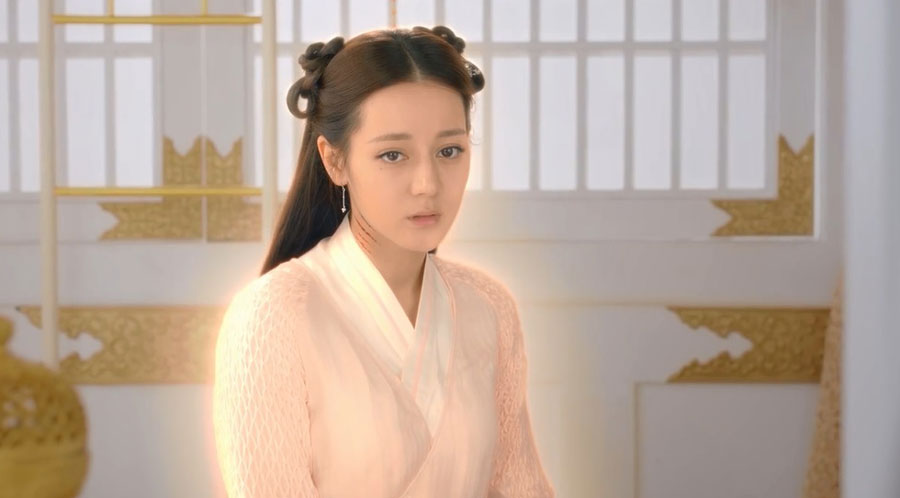 Note: From here on out there are specific plot spoilers for Eternal Love of Dream: Episode 6.

Ji Heng goes to touch Feng Jiu, but Feng Jiu runs away. Ji Heng is sad and thinks Feng Jiu forgot her. Dong Hua comforts Ji Heng that she will have chance to be close to Feng Jiu in the palace.

Lian Song visits Dong Hua and asks him to make a short knife for him to give Cheng Yun as Cheng Yu’s birthday is coming. Dong Hua learns that Cheng Yu takes the short knife, long sword, hidden weapon, iron bow and kitchen knife, when she takes the weapon.

Lian Song asks not to make the short knife with magic, so it will represent his intention to Cheng Yu. Dong Hua thinks the intention shouldn’t taken by someone else, but Lian Song points out that thr crazy thing can only be made by Dong Hua.

Feng Jiu finds the flaw of the design, and thinks Dong Hua will regard her with special respect if she fixes the flaw. She covers the area so that Lian Song doesn’t find it.

Lian Song tells Dong Hua that he found porcelain in the land of Xuan Ming, and promises to give the map to Dong Hua. Dong Hua intends to give the materials of short knife to Lian Song, and gets him to make it on his own.

Lian Song reveals Xuan Ming is still in anger as his wife wrote love letters to him. Dong Hua tells Lian Song to tell people that he is allergy to porcelain, so Xuan Ming will give all of his porcelain to him.

Lian Song agrees to it, and leaves the design of the short knife. Dong Hua tells Feng Jiu that he leaves for the materials.

Feng Jiu drinks the tea Dong Hua left, and thinks he is a good master if she is a pet. She gets Si Ming to fix the design, and she returns to Dong Hua’s room.

Ji Heng steps in and wants to leave a note to Dong Hua because she doesn’t understand the Buddhist scriptures. Dong Hua shows up and mistakes that Ji Heng fixed the design, and tells her to aid him when he makes the knife.

Feng Jiu realizes that Dong Hua only blames her when she has conflict with Ji Heng. But she still wishes Dong Hua to apologize to her. So she returns to take a look what he does.

Feng Jiu sees Ji Heng staying with Dong Hua, and Ji Heng asks Dong Hua to explain to her about the ending place of the design. Feng Jiu thinks she is better than Ji Heng, and wishes Dong Hua to mock Ji Heng.

Dong Hua thinks the two places are less difficult than those two Ji Heng fixed. She explains that the two places perhaps it’s her luck. Ji Heng asks Dong Hua to give her the screen as a prize if she finishes the drawing.

Dong Hua agrees to it and tells Ji Heng to go home after he noted that she is tired. Feng Jiu thinks Dong Hua is nice to Ji Heng, and feels sad as Dong Hua never does so to her.

Ji Heng thinks the flask could have the color of beautiful sunset red if they pulverize the crimson stone and mix it with porcelain clay. Feng Jiu thinks Ji Heng thinks so differently as she could only say, “It can sell a good price.”

Feng Jiu wants to leave but she feels numb in her feet. She trips, and Ji Heng goes to carry Feng Jiu. Ji Heng mentions Feng Jiu liked her so much, and reveals Dong Hua and her made the rice bowl for Feng Jiu.

Ji Heng offers to get Feng Jiu’s claws to make the pattern as her exclusive mark. Feng Jiu complains that she tried so hard to take the position of the pet, and she is furious to scratch Ji Heng’s face.

Dong Hua tells Chong Lin to lock Feng Jiu up as she is too naughty. Chong Lin takes Feng Jiu to his room, and tells her that Ji Heng is afraid of bleeding. So Dong Hua cannot take care of Feng Jiu.

Feng Jiu rushes to the door and wants to go out. Chong Lin tells Feng Jiu to avoid Dong Hua so that he won’t get punished, and he opens the door.

Dong Hua feeds the snow lion with the lucid ganoderma, and Feng Jiu wants to eat it. Dong Hua leaves. Snow Lion beats Feng Jiu down for hurt Ji Heng, and takes away the jade. Feng Jiu tries to take back the jade, but she is thrown into the pond by Snow Lion.

Si Ming intends to fish big fish, but he fishes Feng Jiu. The friend brings the medicine to Si Ming, and notes that Si Ming added so much sugar. Feng Jiu is moved that Si Ming remembered that she’s born to fear bitterness.

Si Ming asks Feng Jiu how she got herself in that situation as an experienced empress. He sighs and leaves. Feng Jiu asks herself if she needs to give up the obsession she has been going on for over 2000 years.

Si Ming tells Feng Jiu that Dong Hua will marry Ji Heng two days later, and thinks the affection will become a torment if Feng Jiu keeps doing so. He tells her that her life will somehow become a misery if she gets herself into it deeper and deeper.

Feng Jiu thinks no women in Qingqiu can bear to lose their dignity like that, and Si Ming asks her if she wants to see Dong Hua for one last time.

Feng Jiu sees Ji Heng staying at the pavilion with Dong Hua, and Ji Heng asks Dong Hua to feed the snow lion. Dong Hua waves the short knife, and Feng Jiu thinks he never saw her even if they were close.