This is the recap of Eternal Love of Dream (Three Lives, Three Worlds, The Pillow Book): Episode 8. Chong Lin tells Dong Hua that the little fox is missing, and Dong Hua asks Chong Lin to look for the fox. Feng Jiu attacks Chu Yin and blames him for cheating her. 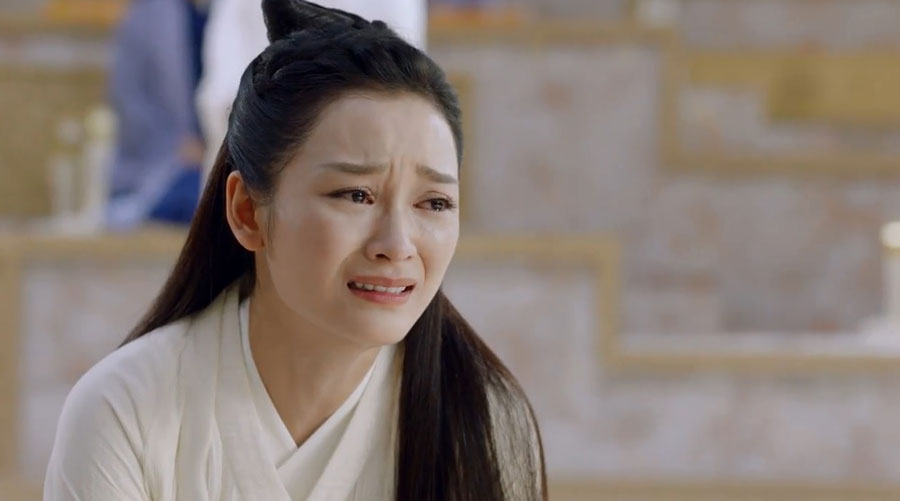 Note: From here on out there are specific plot spoilers for Eternal Love of Dream: Episode 8.

Chu Yin claims that he did promise to give Feng Jiu half of his cultivation, but he didn’t say how long it would be. Feng Jiu beats down Chu Yin in Zhe Yan’s help, and Chun Yin thinks Feng Jiu is shamelessness.

Chun Yin throws away his sword and lets Feng Jiu kill him. Zhe Yan lets Chun Yin be on knees, and Feng Jiu tells Chun Yin that she will wait for him if he wants to fight.

Feng Jiu is happy after taking revenge, but Zhe Yan worries about Chun Yin’s new magic power. Feng Jiu blames Chun Ying for putting the charges on them. Zhe Yan tells Feng Jiu to rely on herself to find the lost dignity.

Zhe Yan tells Feng Jiu that he got A Li to stay beside the Fox King, and reminds her to apologize. She feels sorry for getting A Li to intercede for her.

Zhe Yan comforts Feng Jiu that A Li is good at ingratiating.

Feng Jiu goes to see Fox King, and A Li runs to hug Feng Jiu. Fox King gets Feng Jiu to be on knees, and thinks she should conduct herself as she is the queen of Qingqiu.

Feng Jiu begs Fox King not to be mad, and Zhe Yan thinks Fox King shouldn’t pass the throne to Feng Jiu so early. A Li reminds Fox King to forgive Feng Jiu as she is skinny.

Fox King asks Feng Jiu if she has ever thought about her mother if anything happens to her. Feng Jiu promises to be a qualified queen of Qingqiu. Fox King forgives her. Feng Jiu and A Li go to pick loquats.

Dong Hua looks for the little fox, and sees Feng Jiu taking A Li to run.

Min Su notes that Ji Heng is sick again, and treats her. Xun Yan arrives with demons, and asks to arrest Min Su. Ji Heng stops Xun Yang and tells him that she won’t return to demon palace.

Xun Yang asks the demons to catch the two, and Min Su beats down the demons. But the bodyguard beats down Min Su. Ji Heng freezes all of the demons, and Xun Yang takes his blade to attack Min Su.

Ji Heng ties up Xun Yang with the ice chain, but he unties the chain and releases all of the demons. Xun Yang asks Ji Heng to go back with him, but she only wants to die.

Min Su takes all of the sins and stabs her belly. She falls in Ji Heng’s arms and thinks the brother and sister don’t need to fight without her. Ji Heng cries and wants to take Min Su to see Dong Hua.

Min Su rejects it and tells Ji Heng that she is a female. Min Su climbs to Xun Yang and asks him to set Ji Heng free. Min Su dies, and Xun Yang asks Ji Heng to go back with her.

But Ji Heng carries Min Su and jumps off the cliff. She tears up when Min Su disappears.

Zhi He is in tear and thinks Dong Hua is too cruel. She asks him if he concerned about her when he interceded for Lian Song. But Dong Hua walks away.

The man finds Ji Heng, and Chu Yin asks him to take her back. But Ji Heng doesn’t remember anything. Chun Yin is very happy.

Dong Hua visits Miao Luo, and she thinks he knows that he will be unable to hold her. Dong Hua fixes the seal but vomits blood. Miao Luo points out that he came with injuries.

The three men want to ask Feng Jiu out, and Jing Wei tells them that Feng Jiu is going to break someone’s leg. They’re scared to run away. Jing Wei tells Feng Jiu that the three are useful when she wants to marry someone.