These are recaps of Goodbye My Princess Chinese Drama Episodes 17-18, Xiao Feng wakes up and asks A Do what’s the matter when she is in tears. Emperor interrogates Cheng Yin and promises to punish lightly if he confesses his sins early. But Cheng Yin is on knees and claims he didn’t do anything. 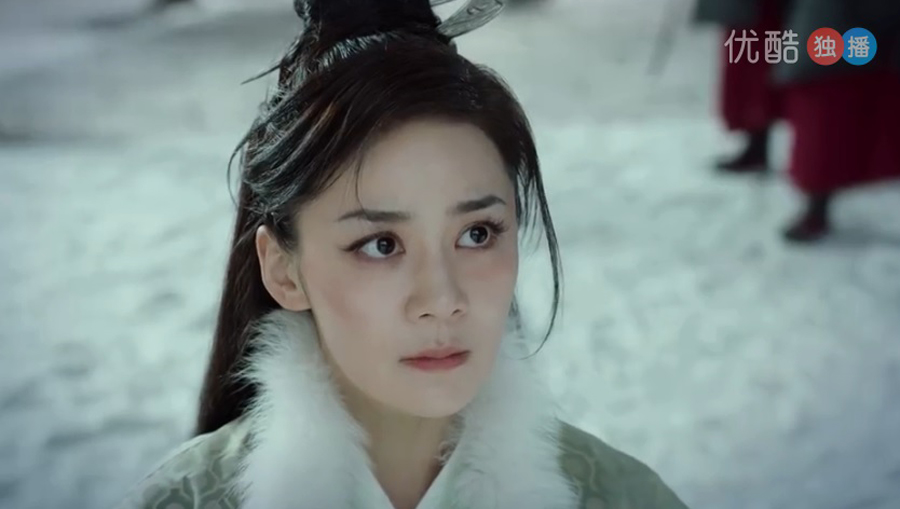 Note: From here on out there are specific plot spoilers for Goodbye My Princess Chinese Drama Episodes 17-18.

Crown prince and Li Yan arrive at the court. Xiao Feng recognizes Li Yan and mentions he was nervous when she slapped. But he claims that he didn’t do anything wrong. She suspects his source of copper. But he blames her and 5th prince for checking his document. Crown prince thinks they shouldn’t punish Li Yan with Xiao Feng’s words. So she offers to open the figure of Buddha, but Li Yan is against it because it offends Buddha. Xiao Feng offers to weight it. But the eunuch reports that the weight is same to the recording. Cheng Yin offers to check another figure of Buddha, but emperor rejects it. Crown prince tells Xiao Feng to inform him before she does.

Xiao Feng thanks Cheng Yin for helping her. He says that he involved her, so he couldn’t make her get wronged alone. Chai Mu scolds Cheng Yin for saying such words to emperor. Cheng Yin says that he couldn’t be a tortoise when Xiao Feng rushes to front. Chai Mu reminds Cheng Yin that they shouldn’t offend Gao Yuming. Cheng Yin apologizes to Gao Yuming and admits he was too reckless at the court. Li Yan laughs that Xiao Feng and Cheng Yin became a joke. He thinks Gao Yumin isn’t the rival to his father Prince of Zhong. Because Prince of Zhong replaced the figure of Buddha for them. But crown prince worries that Cheng Yin knows too much about them. Li Yan offers to get rid of Cheng Yin. But crown prince offers to use new way since they’re in Shang Jing. Goodbye My Princess episode 17 is so good.

Se Se waits for Cheng Yin at his house, and he lets her in. He puts the heater on her hands and blames her for wating outside alone. She tells him that she will support him no matter what he does, and suggests him not to be close to Xiao Feng because of the rumor. He says that people know they’re in love, and Se Se is relieved. Yong Ning and Luo Xi visit Xiao Feng, and offer to go to hot spring. Luo Xi and Xiao Feng look for Yong Ning. Xiao Feng mistakes Chengyin as Yong Ning and blinds his eyes. He takes her into the hot spring. Luo Xi almost falls into water. Pei Zhao catches her arms in the hot spring. Cheng Yin tells Pei Zhao to take Luo Xi away. Pei Zhao gets the clothes on Luo Xi.

Xiao Feng tells Cheng Yin to leave because it isn’t polite to see her. But he claims that she burst into first, and he doesn’t care if she isn’t intention to leave. He gets headache while staring at her, and thinks it’s good not to marry her. She praises his fiance Se Se and leaves. Xiao Feng runs into crown prince and Li Yan at the palace. She asks them about Luo Xi. Li Yan says that Luo Xi went to side palace. After Xiao Feng leaves, Li Yan asks crown prince why Xiao Feng keeps avoiding him since she is going to marry him. Crown prince thinks she has no place to flee. Goodbye My Princess episode 17 is amazing.

Crown prince notices Xiao Feng likes tremella and lotus seed soup, and gives his soup to her. He tells her that he will give everything she wants when Xiao Feng is intention to reject it. But Xiao Feng feels painful and her mouth bleeds when passing out. Emperor steps in and wonders why Xiao Feng got poisoned when she lies in bed. The doctor reveals 9th princess will die in three days if she doesn’t eat the antidote. Emperor asks the doctor to get the antidote, and orders to find the murderer. The eunuch reports that the foods are clean, except the tremella and lotus seed soup. So emperor asks who visited leaving palace. The eunuch reveals Cheng Yin visited leaving palace and left, but he doesn’t dare to tell why 5th prince left. Goodbye My Princess episode 17 is the best episode.

Li Yan admits that he had a fight with 5th prince, and 5th prince wanted to hit crown prince. Another eunuch reveals 5th prince’s maid Chan Er took away the food box before he sent foods, and she sent the foods inside. Chan Er is taken to court and she cries out that she is wronged. But the bodyguard reveals she threw the stuff into the pool before he arrested her. He hands over the bag to the doctor. The doctor puts the bag into water, and the water turns silver needle into dark needle.

Emperor asks Chan Er why she wanted to murder 9th princess. She is silence. The eunuch reveals crown prince gave his tremella and lotus seed soup to 9th princess. Li Yan realizes Chan Er wanted to murder crown prince, and asks her if 5th prince instigated her to murder crown prince. Emperor is furious to break the cup and asks Zeng Xian to search 5th prince’s house. Empress Zhang walks her maid and tells her to inform Prime Minister Gao. The bodyguards bursts into 5th prince’s house and announces that nobody is allowed to leave. Cheng Yin is shocked. Yong Niang gets the wet cloth on Xiao Feng’s forehead. A Du is in tears when grasping Xiao Feng’s hand.

The minister asks Chan Er who instigated her to murder crown prince at the jail. She struggles to get up and claims it was her idea. So the minister asks his follower to take the fire. Chan Er screams and remembers crown prince told her to hung in there for three days. He wiped her tear and thought she worked hard. But she said it was her honor to work for him. He said that he will take care of her family. Goodbye My Princess episode 18 is amazing.

Chan Er lies in floor and trembles, her face is injured. The minister says that he has method to let her speak, and asks her to think about it. She is scared but grasps her fist. Se Se wants to run away from home, but her brother stops her and holds her hand. He scolds her that the bodyguards surround 5th prince’s house, even if a fly cannot fly in. But she says that she will feel relieved if she can see him. He warns her that their family will fail if she steps wrong, and asks his men to lock up Se Se.

Yong Niang wonders why the antidote doesn’t arrive. Xiao Feng vomits blood in the bed, Yong Niang wipes the bloods for her. A Do wants to get changed, Yong Niang goes to take clothes. A Do visits crown prince’s house and asks for antidote. Because she spotted crown prince talked with Chan Er. But crown prince tells her that it’s useless to be on knees because the murderer is 5th prince. She grabs his clothes but Li Yan pushes her over. Li Yan thinks 5th prince is over because the evidence will be handed over to emperor. Crown prince smiles. A Do picks up her knife and leaves. The bodyguard finds the evidence in 5th prince’s house, and the general takes the box away. Goodbye My Princess episode 18 is so good.

A Do spots Gu Jian in the bar and wakes him with wine. She shows the Ming Di to him. Gu Jian seals Yong Niang’s points and knows Xiao Feng gets poison of blood vitex. But it’s too late to make antidote. He says that he has method to get the poison out, and asks A Do to wait outside. He stabs Xiao Feng’s finger and puts it into water. He begins to treat her with his martial arts when he sits behind and touches her back with his palms. The blood flows out.

A Do walks Gu Jian outside, but he vomits blood. She worries about him and calls his name. He is shocked and thinks someone forces her to be dumb. She denies and reveals she can only do that to keep the secret Xiao Feng forgot. He tells her to return home and vomits blood again. Gu Jian remembers the doctor told him that the herb can only maintain his life reluctantly, and he must be careful because his body is a bottle with poison.

The minister reports to emperor that the suspect Chan Er confessed that 5th prince’s asked her to murder crown prince, but she hurt 9th princess by mistake. Emperor orders to lock 5th prince up in jail. But Prime Minister Gao is against it and thinks the maid wronged 5th prince. Other ministers ask emperor to think about it as well. Emperor doesn’t expect 5th prince has so many friends. Li Yan mentions 5th prince and previous crown prince visited Xi Zhou, but he returned alone. Crown prince stops Li Yan and thinks 5th prince wasn’t intention to hurt previous crown prince. Emperor punishes Li Yan with salary. Goodbye My Princess episode 18 brings tears to me.

Xiao Feng wakes up and asks A Do what’s the matter when she is in tears. Emperor interrogates Cheng Yin and promises to punish lightly if he confesses his sins early. But Cheng Yin is on knees and claims he didn’t do anything. He says that he won’t send his maid to do if he wants to kill crown prince. He has nothing to say if emperor wants to believe the evidence. Emperor slaps the table and asks Cheng Yin to explain Cheng Ji’s death. He mentions Cheng Yin’s returning alone. Cheng Yin is shocked and reminds emperor who is the beneficiary. But emperor walks away.

Cheng Yin reminds Cheng Ji told him that people will protect him and murder him. Because they chase power. The court doesn’t need truth. He realizes what Cheng Ji said. The eunuch tells emperor that 9th princess woke up, and emperor runs into empress Zhang in Xiao Feng’s room. He wonders how Xiao Feng is cured. But nobody knows it. Empress Zhang asks emperor about Cheng Yin. He comforts her that he won’t deal with his son.